One of the biggest rice consumers in the world aims to develop a long-term strategy for rice self-sufficiency to meet the continuing increase in population. 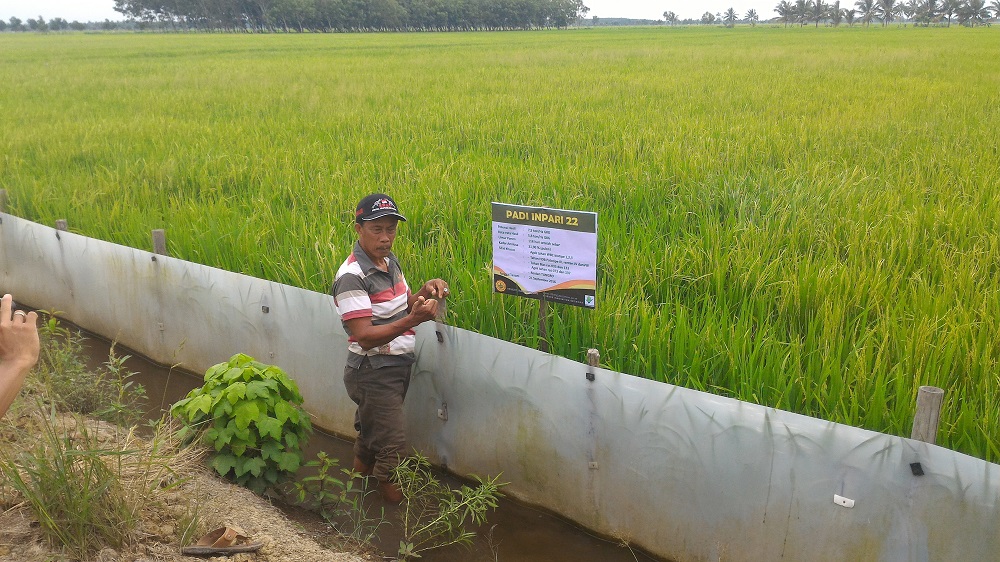 Indonesia is the world’s fourth most populous country and one of the largest rice consumers. To feed the country, its present rice production of 75 million tons must increase by 2.3% per year through 2019. As the demand to produce more grains increases, the country has always depended on Java—where nearly 60% of the total rice production comes from—to fill the country’s rice bowls. Although the yields in Java are relatively high compared with those of other areas of Indonesia, the rice productions areas on the island are under pressure from urban and industrial development.

Efforts to increase national production have led the government of Indonesia to craft a long-term strategy for rice self-sufficiency. A key pillar of this strategy is intensifying rice production on the outer islands, including South Sumatra. The government also developed a policy of GP-PTT (Gerakan Penerapan Pengelolaan Tanaman Terpadu or Implementation Action of Integrated Crop Management) to deploy best management practices in rice-farming communities. This created an opportunity in South Sumatra to forge collaboration between the International Rice Research Institute (IRRI) and the Assessment Institute of Agricultural Technologies (AIAT) through the Closing rice yield gaps with reduced environmental footprints (CORIGAP), a project funded by the Swiss Agency for Development and Cooperation (SDC). In the tidal deltas of South Sumatra, the two institutes are conducting validation of yield gaps to establish solutions that will help farmers sustainably intensify their rice production.

“CORIGAP is fully in line with Indonesia’s national program,” says Dr. Hasil Sembiring, director general of the Directorate of Food Crops in Indonesia. “Due to increasing population and demand for rice, innovation in CORIGAP is needed to increase rice productivity in Indonesia. Thus, we appreciate any innovation introduced to increase our rice production. This year, South Sumatra contributes about 1 million tons of rice.”

Expanding the rice granary to the outer islands
Of the 780,000 hectares of land in South Sumatra, 260,000 hectares situated in the coastal plain and deltas are seen as potential rice-growing areas. However, productivity in these areas is relatively low because most farmers plant rice only once a year.

“I used to harvest only 2–3 tons of rice per year, and was able to plant only during the wet season,” said Pak Subarjo, who has been farming for 35 years. Their rice productivity is impeded by expensive labor and severe pest problems during the dry season when weeds and rodents cause huge losses, he added.

In 2012, more than 250,000 hectares were planted for monsoon rice in the tidal deltas but dry-season rice was planted on only 30 hectares. In 2013, International Rice Research Institute (IRRI) scientists and AIAT staff worked together through to develop and demonstrate best crop and pest management practices. This approach helped farmers in the tidal deltas increase their rice production in 2014 as double cropping expanded to 300 hectares.

Based on this strong evidence of progress, a large-scale rollout of crop management recommendations from the CORIGAP project was conducted in selected rice-farming villages in South Sumatra. A range of technical options was introduced to farmers that helped them close their rice yield gaps: water-saving techniques, legowo drum seeders to optimize labor productivity, ecologically based rodent and weed management, and improved postharvest management of rice. IRRI scientists and AIAT worked hand-in-hand with about 50 farmer groups to promote the adoption of these technologies.

“The AIAT staff and IRRI scientists conducted regular meetings with the farmers,” said Director Harmanto, former director of AIAT, who contributed significantly to the program. “We worked closely with the farmers. We regularly monitored the fields and the farmers and they could easily reach us if they encountered problems. Others, such as university staff members and army personnel, helped expand our reach.”

The hard work paid off. In 2015, the package of CORIGAP best practices was promoted in the villages of South Sumatra. This approach was instrumental in helping farmers implement crop and pest management for rice intensification. Using the CORIGAP approach, around 1,500 hectares of rice fields were planted in the project’s villages. Also, the total dry-season rice crop covered 17,000 hectares in South Sumatra. 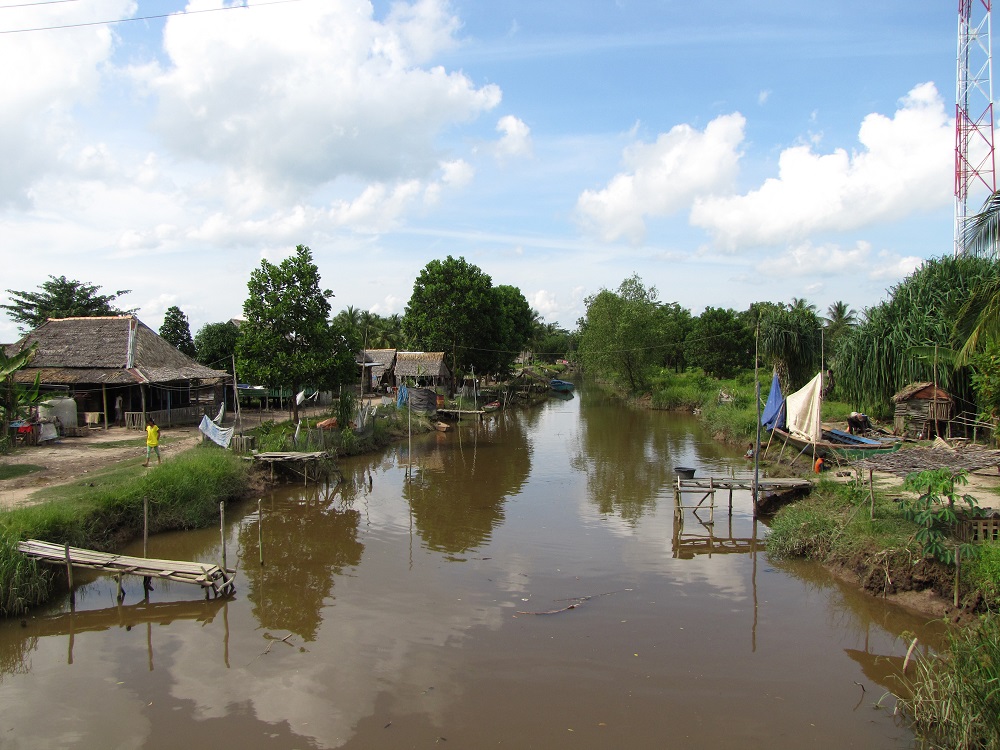 “Now that I’ve seen the benefits of the technologies introduced to me, I reduced the amount of pesticide in my field and used the correct herbicide,” said Pak Subarjo. “I also found the drum seeder very useful.

“After attending training activities from AIAT, I immediately shared my learnings with my son, who helps me tend our rice field,” he added. “I also share my learnings with my fellow farmers here in Sumber Mulyo Village. I also feel confident about planting rice thrice a year.” 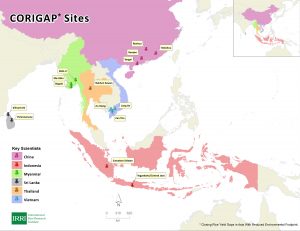 Building on this confidence, he participated in the third cropping of the rice-cropping program of three crops a year, locally called IP 300. His demonstration plot will soon be ready for harvesting. Mr. Subarjo is willing to talk to farmers, extension workers, researchers, and local government staff about his experience.

“The rapid increase in planting area was a combination of innovative extension strategies of AIAT and the promotion of CORIGAP nationally and provincially under the banner of GP-PTT,” said Dr. Harmanto. According to Dr. Harmanto, the strong progress of the CORIGAP approach in South Sumatra can be traced from evidence drawn from the CORIGAP farmer-participatory field trials, its alignment with Indonesia’s national policy for food security, and the innovative approaches in disseminating the crop management recommendations. These encouraged more farmers to increase their cropping intensity, such that the planting area for rice in the dry season expanded impressively to 93,000 hectares in 2016.

The next step: CORIGAP-PRO
Based on the impressive progress of the project, the team aims to reach half a million farmers in six major rice-growing countries, including Indonesia. Through the ongoing support of SDC, IRRI scientists and its national partners in Asia (China, Indonesia, Myanmar, Sri Lanka, Thailand, and Vietnam) are gearing up for the next phase of the project, CORIGAP-PRO.

Building on the success of CORIGAP, CORIGAP-PRO will continue to chart the pathways to increase farmers’ profitability using best management practices for lowland rice production. In the next four years, CORIGAP-PRO will focus on the effective and widespread dissemination of best management practices, which in turn will increase the profitability of rice production and improve the livelihoods of smallholder farmers.