The overall research program of the Institute is oriented toward both basic and applied research. It is concerned with understanding rice as a living organism and with determining ways and means of producing more grain of higher quality on a given area of land. The Institute’s scientists are attempting to question all practices used in growing rice, whether they have been in existence for several thousand years or whether they are of recent introduction. 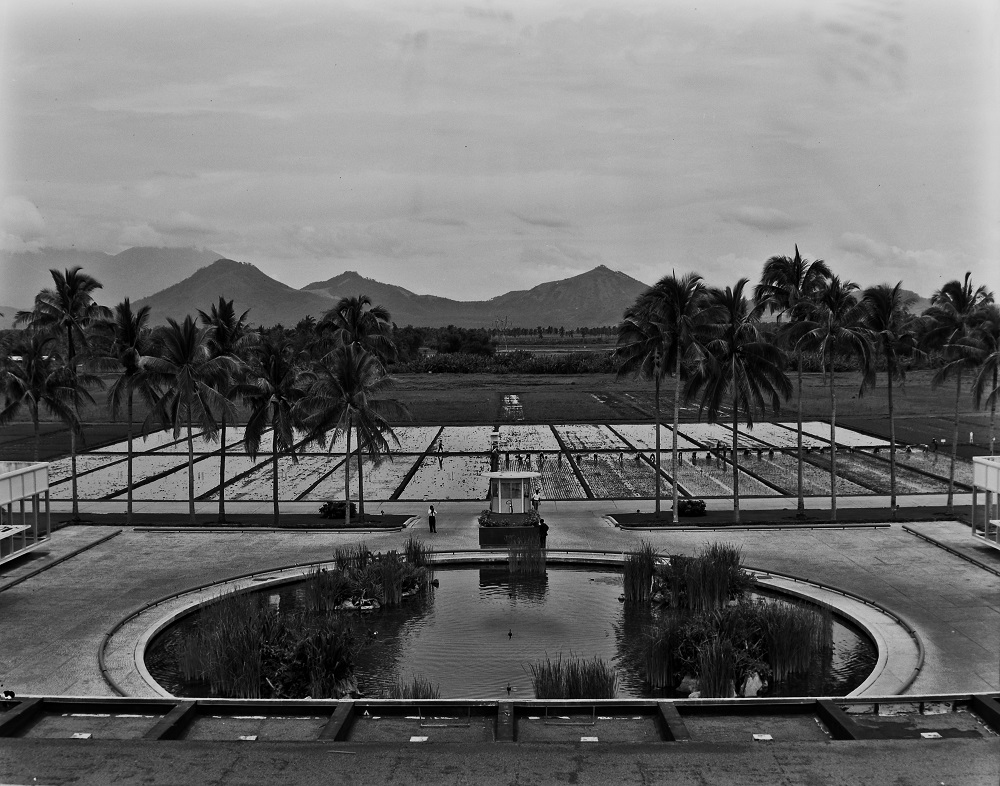 Quater-hectare ex[erimental plots, each of which can be irrigated or drained independently of the others, have been developed on most of the 80-hectare farm. (Photo: IRRI)

Director’s introduction
This is the first published annual report of the International Rice Research Institute. Mainly, it consists of a description of the research work that has been accomplished during the year. In view of the fact that the Institute was not inaugurated until February 7, 1962, it is with some pride that we present the results of the first year of research. With the exception of three programs, all laboratories and other experimental facilities were in full operation by mid-1962. The three programs to be inaugurated in 1963 are agricultural economics, soil microbiology, and agricultural engineering The agricultural economist has been selected and is due to arrive on May 1, 1963. The soil microbiologist also has been chosen and will be ready to start his program by July 1, 1963. The agricultural engineer has been devoting his full attention to the development of the experimental fields but in 1963 the research program will be undertaken.

The Statistician joined the Institute staff November first. His initial activities included a review of the curriculum in mathematics and statistics at the College of Agriculture, assistance to the Institute staff in the analysis of 1962 data, and design of new experiments. During the early part of the year, considerable time went into the establishment of the objectives of the research program of the Institute. Special credit is due the Associate Director, Dr. Sterling Wortman, for his contributions to this effort. Also, several consultants were provided by The Rockefeller Foundation to assist the Institute in developing its program. Among them were Dr. Richard Bradfield, Dr. William I. Myers, and Dr. Sterling B. Hendricks. It should be mentioned that each major scientist spent several months thoroughly reviewing the literature in his field of specialty. Also, several of the senior scientists traveled extensively to acquaint themselves with the current status of work in their fields. This is an essential part of any research effort which, naturally, does not reveal itself in terms of immediate results.

The overall research program of the Institute is oriented toward both basic and applied research. It is concerned with understanding rice as a living organism and with determining ways and means of producing more grain of higher quality on a given area of land. The Institute’s scientists are attempting to question all practices used in growing rice, whether they have been in existence for several thousand years or whether they are of recent introduction.

For example, is transplanting rice a real advantage? Is it necessary to flood rice or would the maintenance of a continuous moisture supply in the soil be adequate? All such questions are being intensively studied in the field and in the laboratory. Although the size of the Institute is such that it cannot expect to solve all of the problems pertaining to rice, it is believed that with an intensive and efficiently conducted program, it can add most significantly to our knowledge of the rice plant and to the practices used in its production. It is entirely possible that within the next five years a variety of rice will be available that will yield well almost any time and anywhere in the torrid zone. Such a variety would, of course, be non-sensitive to variations in the length of day, would have resistance to lodging and to the more common diseases and hopefully to certain insects, would have a dormancy period of a few weeks, and would respond to increased soil fertility levels. It appears that this plant would have certain rather definite physical characteristics which are described in this report under the varietal improvement program. Along with this development would come a much better knowledge of the cultural requirements of rice, perhaps reducing much of the back-breaking labor that now occurs in growing rice in Asia.

The Institute is most fortunate in possessing excellent physical facilities and in having a highly competent staff of young scientists who are attacking their research programs with exceptional vigor and imagination. The administrators of the Institute are confident that these advantages will produce new knowledge which eventually will be reflected in greater productivity on the farm, and in the well-being of the people of the rice-growing countries of the world.

Varietal improvement
One of the most important factors contributing to the frequently low yields of tropical rice is the unavailability of suitable varieties. The most commonly occurring tropical varieties have been selected over several hundred years for their ability to produce a modest crop under conditions of low soil fertility and minimum care. When fertilizers and other good management practices are -used, these varieties produce an over-abundance of foliage with undue shedding of the lower leaves. Furthermore, they usually lodge (fall over before harvest). It appears that the development of early-maturing, high-yielding, stiff-strawed, disease-resistant varieties which are insensitive to length of day—allowing them to be planted any month of the year—is a prerequisite to the rapid increase of rice production in the tropical countries. 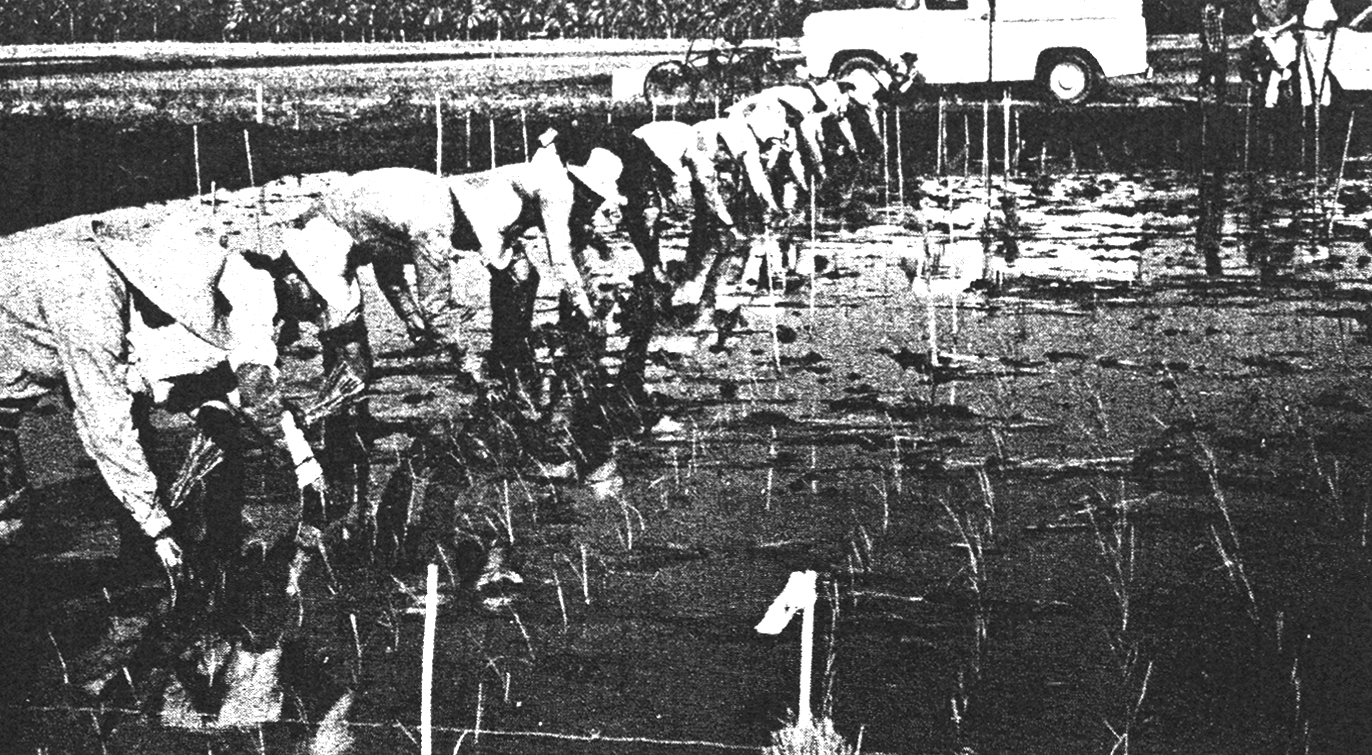 Transplanting a portion of the 5,800 varieties which were compared in field tests in 1962. (Photo: IRRI)

.
Development of improved varieties
An initial planting of nearly 5,800 varieties from the world collection was repeatedly observed during the year to select those types meriting continued interest. Approximately 800 appeared to combine certain of the characteristics felt to offer the greatest promise of high yield in the tropics. These varieties were planted in December 1962 in an unreplicated test involving high and low nitrogen levels, and the following characteristics will be recorded for each: subspecies, temperature, photoperiod and nitrogen responses, maturity, disease re-action, stem, leaf and panicle types, and yield. This detailed observation of the promising varieties should suggest their usefulness in the various parts of Asia, should indicate which are most worthy of inclusion in future yield trials at the Institute and abroad, and should reveal their value as parental material.

Grouping these varieties according to plant type will permit future comparative studies of the relationship between plant type and yield and will provide sets of material of varying appearance and origin for genetic and agronomic studies. A set of about 260 standard varieties from eight Asian countries and the United States has been observed carefully over three successive plantings. In late 1962, 80 of the better varieties were entered in four replicated yield trials for more critical evaluation. One set consisting of japonicas from Taiwan is especially interesting because of their relative insensitivity to tropical temperatures and photoperiods. Their stiff straw, response in grain yield to high fertilizer levels, earliness, and wide adaptability suggest an important future role in the varietal improvement work. Three indica yield trials involving about 20 varieties each, should allow proper selection of a limited number of superior varieties for preliminary hybridization.

Considerable observation and analysis have been made of the possible improvement through plant breeding of the plant characteristics related to the low yield of rice in the tropics. Tropical rices are usually cultivated once annually and are typically weak-strawed, tall, leafy, unresponsive in yield to fertilizer, late in maturity and often are photoperiod sensitive. It would seem that the following plant type might be useful in the near future throughout much of the tropics—a combination of short, stiff culms bearing erect, moderately sized, dark-green leaves; responsiveness in yield to fertilizer; mid-season maturity and, in most cases, photoperiod insensitivity to permit double-cropping practices. These objectives are being pursued in the initial stages of the plant breeding program with both indica by Indica, and indica by japonica hybridization.

World collection of rice germplasm
Emphasis by national breeding programs on the development and extension of widely adapted varieties has already reduced the number of existing varieties, especially in the areas of the greatest natural diversity of rice. Since this trend will continue, it follows that a thorough collection of germplasm now extant is worthwhile before additional variability is lost. The International Rice Research Institute has accepted the responsibility of collecting, multiplying, classifying, cataloging and making available seed of as large a sample of genetic variability in cultivated rice as possible. To date, 6,867 varieties originating from 73 countries and territories have been received. These include the large collection maintained by the United States Department of Agriculture and the FAO indica and japonica sets kept at Cuttack, India and Hiratsuka, Japan.

Each accession is being classified on the basis of over 50 of its taxonomic-morphologic characteristics. Varietal observations are predominantly those of probable economic value, supplemented by others of possible interest for future genetic studies. About 2,000 entries can be completely classified each year. Following this, 500 grams of seed of each are being placed under low temperature and humidity conditions for long-term storage. The data will be sorted. and transcribed to form a usable varietal stock catalog which will be distributed to all interested persons. In this manner, seed requests by varietal name or by indication of type de-sired can be filled conveniently and rapidly. A second collection of genetic stocks con-sisting mainly of species, mutants, and testers now numbers 867 entries. These are being handled in much the same manner as the collection of cultivated rices. Already, over 400 seed lots have been sent from the International Rice Research Institute collection to 17 requesting institutions in 14 countries. A duplicated set of 60 yield trial entries, seeded at the Institute, was sent to Chiayi, Taiwan for evaluation under subtropical conditions.