The most striking contribution of the Entomology Department during 1968 was the further proof that a high degree of immunity to planthopper and leafhopper attack exists in several varieties from India and that this quality is rather simply inherited and can be readily transmitted to improved but susceptible varieties. For example, the variety Mudgo from India is resistant to the brown planthopper, which causes extensive direct damage and is also the vector of the grassy stunt virus disease of rice. When Mudgo is crossed with IR8, which is a highly susceptible variety, the progeny in the F2 generation show a 3:1 segregation, that is, there are three resistant plants to one susceptible. 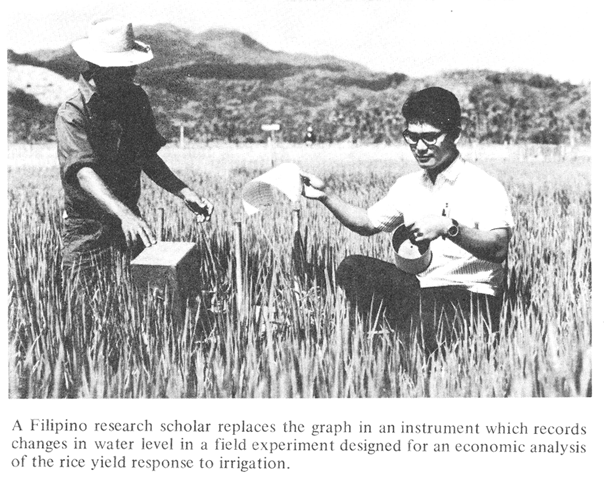 During 1968, the Institute made a strong effort to identify new genetic lines of rice from its breeding program that would have all the advantages of IR8 and IRS and none of their disadvantages. Although none of the selections were pure enough or had been sufficiently tested to allow them to be named in 1968, enough promising materials were identified to give us confidence that one or two new varieties will be named in 1969.

Each year the Institute staff tests more than 40,000 genetic lines from many different crosses. In fact, since the Institute started its research program more than 1,500 crosses have been made. It is only a matter of time before outstanding varieties will be developed and identified which have the high yield potential and fertilizer responsiveness of IR8, but with superior grain quality and increased resistance to the major diseases and insect pests.

Among other things being developed by the Varietal Improvement Department are varieties adaptable to deep water, high-yielding Basmati types, and early-maturing varieties (100 days from seed to seed).

The outstanding contribution of the Agronomy Department during 1968 was to identify and test several promising herbicides, or combinations of herbicides, that would effectively control weeds in transplanted rice. Trifluralin and MCPA; and a-2,2,2-trichloroethyl styrene and the isopropyl ester of 2,4-D; applied once every 4 days after transplanting gave highly satisfactory control of weeds, grasses, sedges, and various broad-leaved species. All three of these chemicals, including the MCPA or 2,4-D, can be applied in a granular form. This eliminates the problems connected with purchasing and maintaining spraying equipment. Also, these chemicals are less costly than hand weeding, and two of the three chemicals mentioned are already on the market in the Philippines and hence available to farmers.

The Agronomy Department continued to work with upland rice. In 1967 excellent yields were obtained, but in 1968 the rainfall was quite uneven and lower in total amount. As a result, yields were extremely low. This simply shows that rice has low tolerance to drought and in regions where rainfall is highly unpredictable, it would be preferable under upland conditions to plant crops other than rice, such as sorghum, millet, soybeans, and maize.

The Agronomy Department has been attempting to increase total annual rice production by growing four crops a year. During 1968, four crops of the variety Taichung (Native) 1 yielded a total of 22,400 kg/ha. This is the highest total annual production of rice yet obtained at the Institute. An early-maturing selection from the 1R8 line produced 22,000 kg/ha and another variety which we call “dwarf Peta” yielded 21,800 kilograms. All of these yields were obtained in 365 days or less.

The Agronomy Department continues to conduct a few experiments on farmers’ fields and in one in Calamba, IR8 yielded 10,474 kg/ha. This is the highest yield yet obtained on replicated plots in the Philippines. Every effort was made to keep the cash inputs as low as possible, and this high yield was obtained by spending a total of P456 for insect and weed control, and for fertilizers. This is, of course, the cash outlay and does not involve the cost of labor, other than that of weeding. Ten tons of rice should sell for approximately -P3,300. It would indeed give a farmer a good labor income from only one crop, and of course, if he has irrigation water, he can grow one or two additional crops during the year.

The most striking contribution of the Entomology Department during 1968 was the further proof that a high degree of immunity to planthopper and leafhopper attack exists in several varieties from India and that this quality is rather simply inherited and can be readily transmitted to improved but susceptible varieties. For example, the variety Mudgo from India is resistant to the brown planthopper, which causes extensive direct damage and is also the vector of the grassy stunt virus disease of rice. Planthoppers caged with this variety live no more than 4 days and do not multiply sufficiently to maintain their population. When Mudgo is crossed with IR8, which is a highly susceptible variety, the progeny in the F2 generation show a 3:1 segregation, that is, there are three resistant plants to one susceptible. Although the genetics of this have not yet been carefully studied, it appears to be a straight Mendelian ratio indicating that a single dominant gene is responsible for the resistance. If there are modifying genes, their influence must be slight. 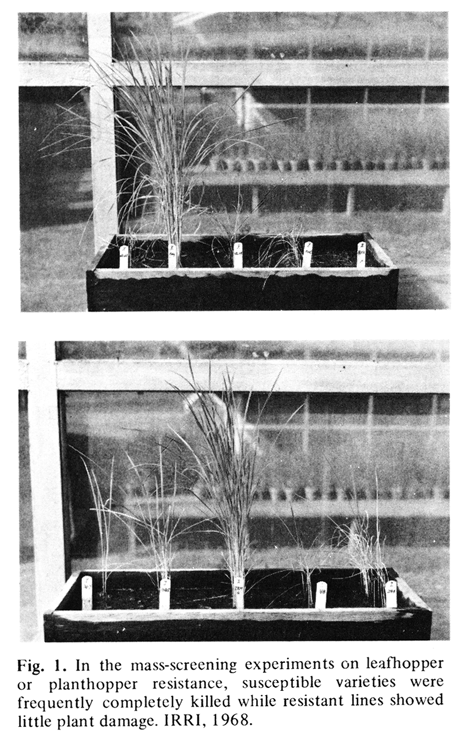 A similar study is being carried out with the green planthopper, also a vector of virus diseases. A variety called Pankhari 203 from India has strong resistance to the green leafhopper. The resistance can be incorporated into a susceptible variety in a similar way as is the resistance to the brown planthopper. Preliminary evidence indicates that soon we shall to able to develop improved varieties that have strong resistance to both the brown planthopper and the green leafhopper. This will indeed be a great boon to farmers who now must either spend large amounts of money for insecticides to control these pests or must suffer the yield losses that result from their attacks.

There was widespread evidence obtained this year to indicate that the brown planthoppers on the Institute’s field were beginning to develop resistance to diazinon, the chemical which originally gave good control. The Institute has been using This chemical for about 3 years and with a new generation of brown planthoppers every 15 to 20 days, obviously many generations have occurred. We are now testing several new chemicals for insect control on rice and some of them look highly promising.

The Chemistry Department continued to study the protein content of rice grain and the distribution of the essential amino acids. It was mentioned in the 1967 report that quite a few varieties averaged more than 13.5 percent protein in the brown rice (the average protein content of brown rice is about 8 percent). Several of these selections have been crossed with varieties with a good plant type, such as IR8. Very preliminary information indicates that there is some possibility that high-yielding, nitrogen-responsive varieties of rice can be developed that have protein contents averaging 10 percent rather than less than 8 percent. The protein content of rice is strongly influenced by the environment and, generally speaking, as yield goes up the protein content goes down. It may take another 2 years to determine for certain whether a significant and consistent high protein level can be introduced into rice varieties through plant breeding. 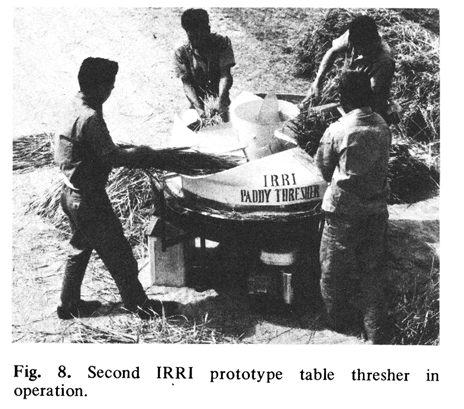 As mentioned in the 1967 report, the Agricultural Engineering Department has developed a new type of mechanical thresher. During 1968 this piece of equipment was further improved and widely tested. It has proved to be quite successful from the standpoint of acceptance by selected farmers, principally because it is simple to operate, has few mechanical troubles, and can thresh wet rice. Three commercial companies in the Philippines have constructed models after the Institute design, and some of these manufactured models are now being shipped to other cooperating countries for trial.

The Engineering Department continues to work on equipment for wetland preparation, but it may be several years before something significant will come from the program. Work was started in 1968 on a mechanical stripper for harvesting rice.

The Multiple Cropping program of the Institute was expanded during 1968 because of the increasing awareness of the need and opportunity for growing food crops the year-round in tropical Asia. Essentially all the land in the Multiple Cropping experimental area was planted to rice during the monsoon season and to several other crops during the remainder of the year. Among the more successful crops in rotation with rice are soybeans, sweet potatoes, sweet corn, cowpeas, and sorghum. The program received a grant from The Rockefeller Foundation enabling the construction of a small building for multiple cropping which will have a classroom for training, offices, storerooms, and workrooms for the staff and trainees. It is expected that a multiple cropping training program for the Philippines and Southeast Asia will be underway by June 1969.

The Rice Production Training Program continued unabated and at an international level. A group of 35 scholars from nine countries was in residence at the Institute from early June until early December 1968. The largest group was from India; other countries represented included Pakistan, Ceylon, South Vietnam, Indonesia, the United States, Malaysia, Laos, and the Philippines.

The spread of Institute varieties continued throughout Asia and in certain other parts of the world. For example. Pakistan is now growing more than one million acres of 1R8 and India may have a total of five million acres. Burma has an estimated 400,000 acres and the Philippines has more than one million acres. Undoubtedly, in the world, there were at least 10 million acres of IR8 being grown in 1968, and if you estimate conservatively an additional profit of U.S. $60 per acre, the calculated increased income for rice farmers in 1968 is $600,000,000. During 1968 the expenditures of the Institute was somewhat over 11/2 million dollars which shows that there is a rather high pay-off on the investment made by the foundations and other organizations supporting the research program.