During 1969, the Institute named two new varieties, IR20 and IR22. They have the same yield potential as IR5 and IR8 but they are highly superior in grain appearance and should have a greatly increased market value. IR20 and IR22 are only additional forward steps in the effort to produce better rice varieties for the tropics; much is left to be done. Improvements beyond the next five years should bring about varieties with increased protein quantity and quality, higher-yielding upland varieties with increased drought tolerance, and varieties with higher yield potentials, perhaps as much as 50% above those of the best varieties available today. 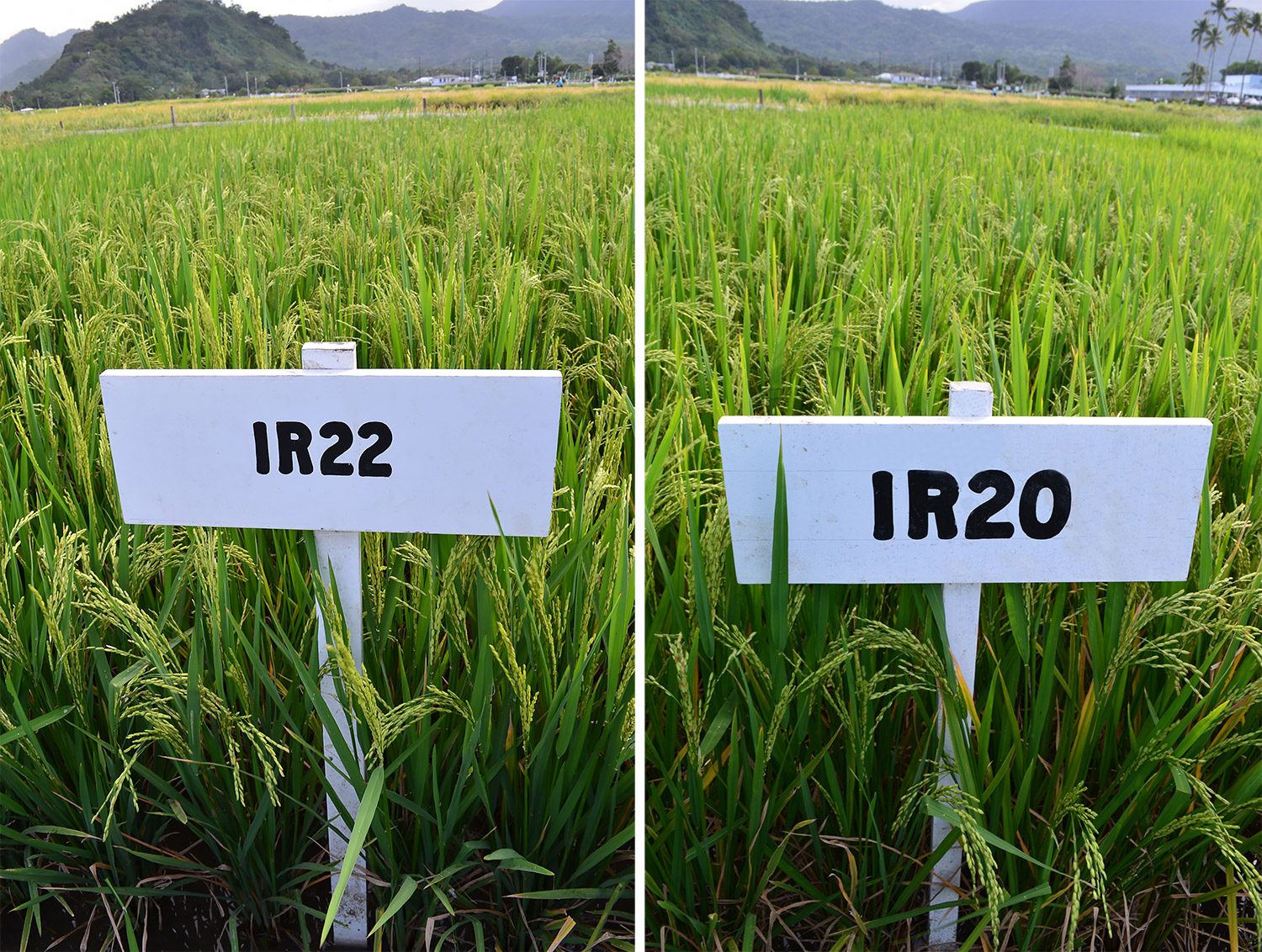 IR22 has a long, slender, translucent grain in contrast with the bold and chalky grain of IR8. IR20 has a medium-long, slender grain with little chalkiness. Its particular value is its disease and insect resistance.  (Photo: IRRI)

During 1969, the Institute named two new varieties, IR20 and IR22. They have the same yield potential as IR5 and IR8, the two varieties previously named by the Institute, but they are highly superior in grain appearance and should have a greatly increased market value.

IR20 has a medium-long, slender grain with little chalkiness. Its particular value is its disease and insect resistance. It has medium resistance to rice stem borers. It also has high resistance to bacterial leaf blight and to many races of the rice blast disease. Its resistance to the tungro virus disease is rated medium. Early trials have been so successful in East Pakistan that several hundred tons of IR20 seeds have been imported by East Pakistan for extensive plantings in 1970.

IR22 has a long, slender, translucent grain in contrast with the bold and chalky grain of IR8. The head rice recovery of IR22 on milling is much higher than that of IR8.

IR20 formerly carried the designation IR532E576 and IR22 was known as IR579-160-2. A full report of these new varieties will be found in the Varietal Improvement section of this report.

IR20 and IR22 are only additional forward steps in the effort to produce better rice varieties for the tropics; much is left to be done. During the next 3 to 5 years the Institute’s varietal improvement program is expected to develop varieties that possess strong resistance to the green leafhopper and the brown planthopper, that perform better under the cool temperatures that prevail in subtropical rice-growing regions during the winter months, and that have a range in crop duration from as early as 100 days to as late as 150 days, but with little sensitivity to photoperiod. Furthermore, the leaves will be tough enough to withstand high winds without tearing, and the levels of disease resistance will be greater than those of any of the new varieties now being grown. These varieties will be selected with the objective of at least maintaining present yield potentials and grain quality standards.

The Agronomy Department showed in 1969 that the isopropyl ester of 2.4-D, applied in granular form 3 or 4 days after transplanting, can give excellent control of grasses, annual sedges, and broadleaved weed species. At current cost relationships in the Philippines, weeds can now be controlled in transplanted rice with the isopropyl ester of 2,4-D at half the cost of hired hand labor. Although several other chemicals provide excellent control, at present prices they cannot compete successfully with 2,4-D. Obviously this situation may change in the future.

The Agronomy Department harvested its twenty-first rice crop on the same land in 7-1/2 years in its so-called maximum yield experiment. The three best treatments in 1969 gave a total yield of 23 metric tons per hectare in 12 months. This is 3 tons per hectare more than any yield previously reported from this three-crops-a-year experiment. The higher yield can be attributed mainly to better insect control and to the use of higher-yielding varieties with greater disease resistance.

A project for the development of genetic lines that have high resistance to the green leafhopper and the brown planthopper is going ahead, but it will take 2 or 3 more years to introduce this resistance into otherwise improved varieties.

The Entomology Department continues to study chemicals for insect control. Because the brown planthopper population on the Institute farm has developed resistance to diazinon, a renewed effort is underway to identify suitable systemic insecticides that can be applied in granular form and that have low toxicity to human beings and other animals. The trade names of some promising materials are Furadan, Dolmix, and Mipcin.

The Plant Pathology Department discovered during the year that a Dupont chemical called “Benlate” gives excellent control of the rice blast disease. It is a systemic fungicide and can be applied to the soil before planting or to the seeds, or sprayed on the leaves before neck rot infection occurs. The compound is indeed promising, but because it is very new, the economics of its use have not yet been determined.

The Plant Physiology Department has shown that there is no optimum leaf area index with respect to the grain yield of new varieties with the plant type of IRS. Rather there is a critical value between 5 and 6; higher indices do not result in yield decreases unless serious lodging occurs. The Agricultural Engineering Department has developed an improved seed cleaner which greatly increases the efficiency of cleaning threshed grain. It is simple in design and durable. It may be manufactured commercially before the end of 1970. The Department made further progress in developing a stripper for efficient rice harvesting on small farms, initiated studies of high-temperature grain drying, and continued its efforts to develop more effective land preparation equipment for both small and large rice farms. This work is largely supported by the U.S. Agency for International Development.

For the first time in its history, the Institute conducted a 4-month training program in multiple cropping. The objective of the program is to train people engaged in extension and applied research in the practice of growing a crop of rice during the rainy season followed by a succession of upland crops during the dry season. Beginning in 1970, this course will have participants from several countries; the 1969 class was composed principally of Filipinos.

The rice production training course continued at its usual high level with 35 participants from 14 countries. At the peak of its training operations during the year, the Institute had scholars from 20 different countries.