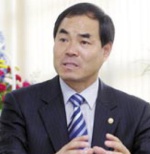 MR. KIM is the administrator of Korea’s Rural Development Administration

The Rural Development Administration (RDA), which celebrated its 100th anniversary recently (see page 5), is the central government organization responsible for agricultural research and extension in Korea. Since 1906, RDA and its forerunner, the Experiment Station for Agricultural Encouragement, have developed new technologies and extended these for the development of rural areas and the agricultural sector.

RDA’s efforts over the last 100 years have helped Korea achieve self-sufﬁciency in rice and other staple foods through dissemination and promotion of high-yielding cultivars and improved production technologies. RDA has also taken great steps to improve the rural environment and nurture new farmers.

Amid the difﬁculties imposed by shifting domestic and international circumstances, the expectation of the Korean people for rural development and agriculture has not changed. To meet the population’s demands, RDA announced on 9 May 2006 the Innovation Program of RDA.

Under the vision Technology development and extension for competitive agriculture and cherished rural community, RDA has set three goals: ensure agricultural competitiveness to help Korea reach a US$20,000 per capita gross national product, increase quality of life by enhancing the vitality of rural areas, and educate agricultural leaders to guide rural society.

To implement these goals, RDA has developed four basic courses for agricultural research and extension: address the bottleneck of agricultural technologies and apply on-the-spot research directly to farms, develop and extend technologies that lead to the formulation of a national policy for rural development, support agricultural industrialization in the form of biomedicine and other functional materials, and establish basic information and data (for example, soil surveys over Korea’s total agricultural area and collection and analysis of genetic resources).

Along with these initiatives, RDA is strengthening its efforts to reduce poverty, hunger, and malnutrition in developing countries. For example, RDA recently created ﬁve alumni associations consisting of RDA trainees from Indonesia, the Philippines, Sri Lanka, Thailand, and Vietnam. These alumni associations will help sustain the linkage and beneﬁts between RDA and the trainees, and ensure the ongoing transfer of technologies from Korea to developing countries. Since the 1970s, RDA technology transfer training programs have trained more than 3,000 people from 111 countries, mostly in Asia and Africa, on rice production and rural development. RDA collaborates closely with international organizations, international research centers under the Consultative Group on International Agricultural Research (CGIAR)—especially the International Rice Research Institute (IRRI)—and many national agricultural research and extension systems in Africa, Asia, and South America.

RDA has had particularly close partnership with IRRI since IRRI was established in 1960. This cooperation can be divided into three stages. The beginning stage (1962-76) saw IRRI support RDA by providing individual training for Korean scientists. It is widely acknowledged that Korea achieved rice self-sufﬁciency during the Green Revolution in the 1970s largely through IRRI’s assistance. In the developing stage (1977-90), RDA co-supported collaborative projects. Now, we are in the mature stage (1991-present), during which RDA has donated funds to IRRI through the CGIAR. Throughout its partnership with IRRI, Korea’s research and development capacity has continued to improve and is now highly regarded by world standards. Now, it is time for RDA to ﬁ nd better ways to address world agricultural issues and the global problem of poverty. In this light, the recently opened IRRI-Korea Ofﬁce—housed at RDA’s National Institute of Crop Science in Suwon—can contribute not only to the strengthening of cooperation between RDA and IRRI but also to the continuing evolution of Korea as a world leader in japonica rice research.