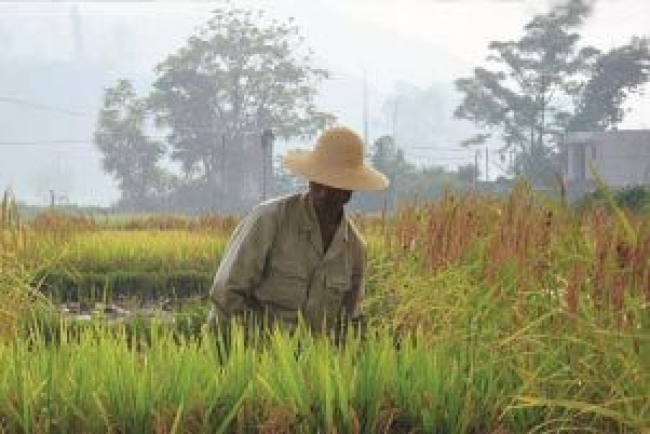 Large-scale field experiments have shown that within-field varietal diversification is a highly effective approach to controlling blast disease in rice. This result was reported in August 2000 in the prestigious journal Nature (406: 718-722) by scientists from IRRI and collaborating institutions in China. They found that interplanting disease-susceptible glutinous rice with resistant hybrid rice reduced the severity of rice blast by 94% and improved the yield of the highly valued glutinous variety by 89%.

The simplicity and effectiveness of this approach has since attracted great interest from farmers and policy makers alike. Indeed, it is changing the rice landscape of the southwestern province of Yunnan and has extended to other provinces in China, as the alternating rows short and tall rice varieties become a prominent feature of many rice fields.

As of last year, mixed planting of rice varieties to control blast and improve yield had expanded to 100,000 ha in Yunnan. Such rapid adoption can be attributed to a systematic extension campaign involving county and village officials, researchers, and extension workers. The extension network ensures not only that farmers are trained but also that seeds are available at
planting time.

As the interplanted area increased, so did the number of varieties used in mixture. In lieu of glutinous rice, farmers began planting 26 other high-quality but blast-susceptible traditional rice varieties as the susceptible interplant between rows of hybrid rice, with equally good results. This suggests that many valuable traditional varieties that are no longer grown because of their susceptibility to disease can now be brought back into production through this ecologically sound approach to crop management.

Ten other provinces in China have evaluated the technology for possible large-scale implementation. In 2001, Sichuan Province, which has more than 2.3 million ha under rice, evaluated the technique in more than 3,000 ha. Because of a prolonged drought in Sichuan last year, blast incidence was generally low even in susceptible checks. However, the yield in mixture planting was 0.5 to 1.0 ton per ha higher than in hybrid rice alone. Monocultured glutinous rice plants lodged after a rainstorm, while those grown in mixture escaped lodging. An expansion area of close to 70,000 ha is planned for this year.

Exploiting genetic diversity in rice production has been part of an on-going collaborative project between IRRI and Yunnan Agricultural University since 1997.

Since last year, the scientists have extended the idea of diversification to control the diseases and insect pests of other major crops in Yunnan, particularly wheat and broad bean.

As part of a rice-wheat cropping system, wheat is planted during winter on over 250,000 ha in Yunnan.Wheat stripe rust, caused by Puccinia triticana, is a major constraint to production, causing yield losses as high as 15-20%. Broad bean is an important cash crop planted during the same season as wheat, but bean yield is often compromised by serious root and stem damage caused by maggots of the bean fly (Ophiomyia phaseoli).

Researchers intercropped wheat and broad bean by planting wheat in blocks of 1 m × 20 m and then planting two rows of broad bean between blocks. This intercropping design reduced the incidence of wheat rust by 19-27%, and damage due to bean fly maggots decreased to minimal. The intercrop registered a 24-26% yield advantage over the monocrop at all sites. Rhizobial
nodule formation in intercropped broad bean was also significantly higher than in the monoculture crop.

Scientists are forming an extensive network of researchers and extension personnel in Yunnan to disseminate this technology to farmers. Meanwhile, diversification as a means to sustain productivity has spread to other rice growing countries. Field trials to evaluate how effectively varietal mixtures reduce the severity of tungro disease are underway in the Philippines.Vietnam will try the concept out on rice blast, which is becoming a serious problem in the Mekong Delta and central Vietnam due to resistance breakdown in commonly grown varieties.