As “Royal Patron” of IRRI, His Majesty King Bhumibol Adulyadej shared with the rice research community his knowledge and championship of global food security. 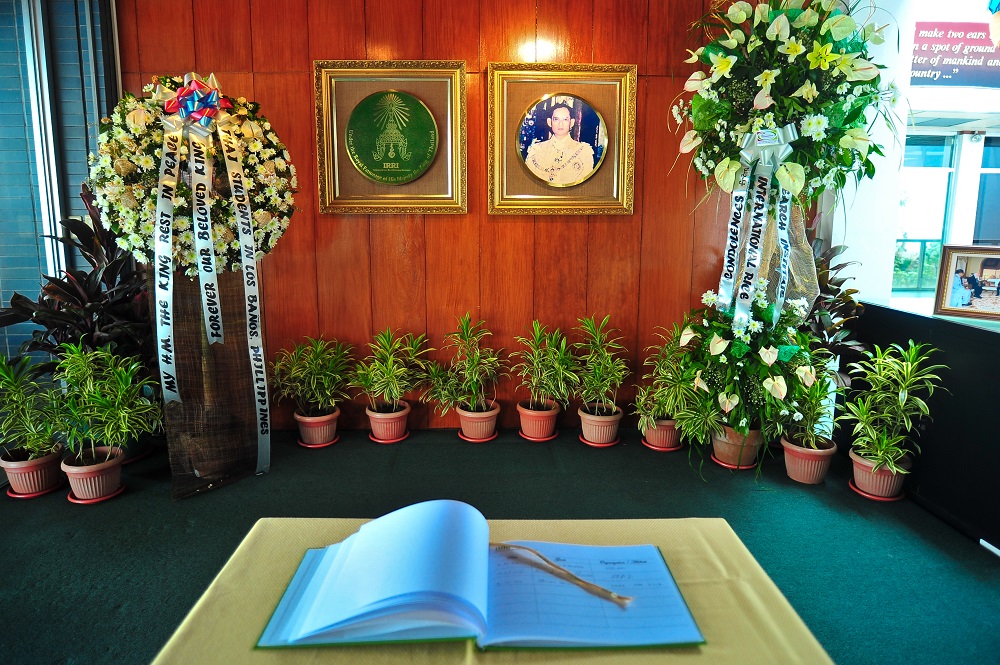 On the wall near the entrance to the Riceworld Museum at the International Rice Research Institute (IRRI) hang two plaques—one with a portrait of His Majesty King Bhumibol Adulyadej of Thailand, the other depicting an emblem of the king above the IRRI logo, cradled by the inscription, Under the Royal Patronage of his Majesty the King of Thailand.

This week, the corner in which these memorabilia have stood quietly for decades has transformed into another kind of quiet—that of Thai citizens, IRRI staff, and members of the community come to pay their last respects to Thailand’s revered king.

But, despite the wreaths of flowers signaling an unmistakable milestone, the mood is hardly morose. Instead, in this 56-year-old global center for rice research, the support of the world’s longest reigning monarch (up until his passing) is remembered with much warmth and gratitude:

On 18 October, IRRI’s Board of Trustees issued a resolution of condolences (click the photo below) listing highlights of the “Royal Patronage” of HM King Bhumibol and his several acts of support for IRRI’s work “to benefit Thai farmers and others in the region.” 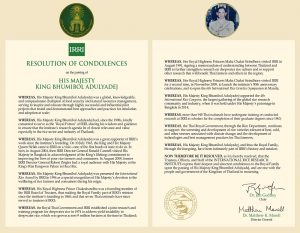 As “Royal Patron” of IRRI, the King shared with the rice research community his knowledge and championship of global food security and natural resource management issues.

The resolution is a formal expression of IRRI’s solidarity with the Thai people in mourning their King, and has been presented to the Government of Thailand and the Royal Family.

IRRI senior management has also sent letters of condolences to the Ministry of Agriculture and Cooperatives and to the ministry’s Rice Department, which has collaborated with IRRI on various research and extension projects over several years.

Pongmanee Thongbai and Apinporn Phuengwattanapanich, national consultant and associate manager, respectively, of the IRRI-Thailand Office at the Thai Rice Department sent this message in an email:

“As Thai citizens, we would like to express our heartfelt gratitude to IRRI expression of condolence, and on your kind preparation to commemorate our Great King on his championship of global food security, sufficiency in agriculture, sustainable natural resource management, and, most importantly, the well-being of poor farmers. Your kind words and action is (sic) highly appreciated.”

A partner since Day One
Thailand and IRRI have been partners since 1960, the year the institute was founded. His Royal Highness Prince Chakrabandhu, a member of the Royal Family who had advanced training in agriculture, was a founding member of the IRRI Board of Trustees.

HM King Bhumibol and Her Majesty Queen Sirikit visited IRRI shortly afterward, in 1963. In 2004 and 2009, the King received IRRI Directors General Ronald Cantrell and Robert Zeigler, respectively, in Thailand to discuss strategies for further improving the lives of poor rice farmers and consumers.

HRH Princess Maha Chakri Sirindhorn, daughter of Their Majesties, has also been to IRRI on two occasions: in August 1991 to sign an agreement between Thailand and IRRI to strengthen research on deepwater rice, which at the time was grown on millions of hectares in Thailand; and in November 2009 to launch IRRI’s 50th anniversary celebrations and to open a rice genetics event in Manila. (See photos of members of the Thai Royal Family and IRRI.)

Since 1963, more than 940 Thai nationals have undergone training or conducted research at IRRI toward graduate degrees.

Key impact of the Thailand-IRRI rice research partnership include stabilization of yield from deepwater rice, helped greatly by the establishment in 1974 of the Prachinburi Rice Research Center specifically for the purpose; cessation of the misuse of pesticides, in part to manage planthopper outbreaks; promotion of better and sustainable farming practices; breeding of rice tolerant of environmental stresses exacerbated by climate change (e.g., flooding, drought, heat, and cold); and selection of suitable varieties for Thai environments, including the uplands of Northern Thailand.

The Thailand-IRRI collaboration supported huge government investment in agricultural development, extension, and infrastructure, all of which allowed Thai farmers to increase cropping intensity. Today, Thailand remains a top producer and exporter of rice globally. (More on the Thailand-IRRI partnership.)