This year, 2016, IRRI is celebrating the 50th anniversary of the release of IR8, the first semidwarf rice variety that changed agriculture across Asia, Latin America, and elsewhere. It is also the golden anniversary of the historic arrival of the first and only U.S. president who visited the institute in 1966 to see this miracle rice called IR8. 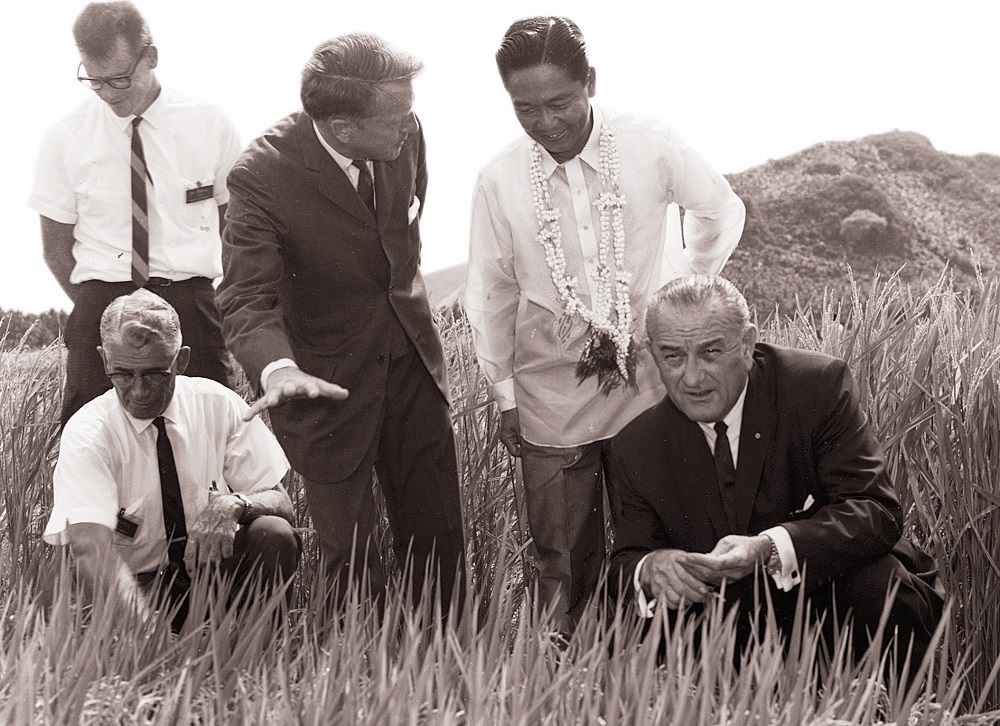 This year, 2016, IRRI is observing and celebrating the 50th anniversary of the release of IR8, the first semidwarf rice variety that would ultimately change the face of agriculture across Asia, Latin America, and elsewhere. However, it is also the golden anniversary of the historic arrival of the first and only U.S. president, Lyndon Johnson, who visited the institute on 26 October 1966. He came to see—and find out more about—this miracle rice called IR8.

Braving the mud, LBJ went out into a rice plot to inspect the variety that was making so much of a stir in the media. As the iconic photo shows, IRRI Director General Robert Chandler, Jr. briefed LBJ and Philippine President Ferdinand Marcos, explaining the importance of semidwarfness in the new variety. Also in the photo are Peter Jennings (standing) and Hank Beachell, the IRRI breeders responsible for IR8’s development. LBJ then came up out of the field and, under a hot blazing sun just before 1 p.m., he delivered an inspiring speech to the awaiting crowd of IRRI staff members and other visitors.

The U.S. president was an accomplished orator and at his best that day. He concluded, speaking of IRRI, with the words, “You are pointing the way for all of Asia to follow and I hope they are looking. I hope they are listening. And I hope they are following.” You can experience the goosebumps that I get every time I listen to those words delivered so dramatically in the brief video excerpt we have of that speech.

For almost five decades, that brief video clip was all that we had of the presidential speech at IRRI. Then, just last year, we discovered the full transcript of his speech on the website of the American Presidency Project. So, here is most of LBJ’s presentation on that historic day, which contains some interesting historical background.

“We meet here in a new Asia. In this Asia, the old barriers of indifference and rivalry are slowly being overcome—and a new spirit of cooperation is taking shape. Today, while our Asian friends still need a helping hand, they want to match it with their own efforts—aimed toward their own goals.

This rice research institute here in Los Baños is a product of intelligent assistance. Two American foundations [Ford and Rockefeller] have given support. One of the moving forces behind the creation of the institute, I am proud to say, was that great former president of the Rockefeller Foundation, whose vision, whose genius did so much to help in this work—Dean Rusk. The institute’s director today is a New Hampshire man, who just addressed us, Dr. Robert Chandler. Yet, the professional staff includes scientists of seven nationalities; two-thirds of them are Asian.

In its short 4 years of existence [apparently using 1962 as the date when IRRI’s research program began, not the 1960 date of its founding], this Institute has produced promising new strains of higher-yielding rice, which are now being planted in the soil of many countries. One strain developed here [IR8] has been called the “miracle” rice. I am glad to know that the institute is prepared to make these seeds available to all nations—to all nations whatever their politics and ideology. The need for food transcends all the divisions man has created for himself. Man’s greatest problem is the fearful race between food and population. If we lose that race, our hopes for the future will turn to ashes. And, the shocking truth is that, as of now, as we speak here today, we are losing the war on hunger. There are nations of the world with declining standards of living—where population growth is already outrunning the supply of fundamental food stocks.

At the same time, the stocks of surplus-producing nations have rapidly declined. There was in 1961 a grain surplus of 136 million tons. The figure for 1967 is down from 136 million to 50 million. A rice surplus of over a billion tons existed in 1956. It has now dropped to a mere 300 million tons—or less than a third of what it was 10 years ago. These are danger signals that we cannot ignore.

Between now and 1980, we must prepare to feed one billion more people. That may sound like a bloodless, economic abstraction. But we must learn to hear what it says in human terms:

One billion more people means one billion babies. And four out of five of those babies will be born in countries that cannot, today, feed their people from their own resources. Now, somehow or other, we must do something about this. We must overcome this. And you are doing something about it right here. This is one of the most encouraging things that I have seen.

And you here at Los Baños are pointing the way that we will need to be pointed throughout all of Southeast Asia. Drawing on your experiments, these new rice strains, the technical training you are giving in conjunction with the College of Agriculture at the University of the Philippines—which has your President [Marcos] so excited and who has described it to me fully today—will, I think, do more to escalate the war against hunger than anything that I know of that is being done today. So, I congratulate President Marcos.

I say that that is the only war that we really seek to escalate. We believe we can win this war against hunger. Yet victory will not come easily. These young people believe— and they are right, I think—there is nothing natural or God-given about poverty or hunger and disease. Some of them react against an unjust state by professing empty ideologies.

But some—and they are represented here at Los Baños— realize that only knowledge, skill, and hard work can provide fruitful avenues to a decent future.

In every country—but particularly in Asia, Latin America, and Africa—there is a desperate need for skilled men and women who can release their brothers from the barrios of poverty.

For, if the world’s need for food is to be met, it will be by scientists and economists who will discover better seeds, who will find better methods of planting, who will give us better ways of distributing the harvest of the earth. It will not be by “miracles,” but by the qualities of dedicated minds that we find working right here tonight in the new Los Baños rice strain. I want to thank Dr. Robert Chandler. I want to express my admiration to him and to all the members of the staff of this great institute. I want to commend President and Mrs. Marcos for their interest in this kind of development.