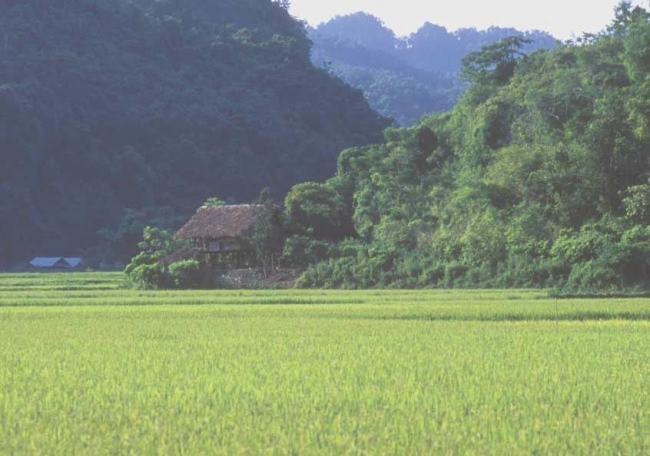 Water buffalo and wiry farmers muscle plows through flooded rice paddies. Houses of rough planks and thatch cluster along a road that skirts the valley, tracing the line along which flat, intensively cultivated bottomland abruptly yields to steep hillsides displaying a patchwork of forest and upland fields. This scene in the northern Vietnamese province of Bac Kan, on the outskirts of Ba Be National Park, appears to exist outside of time, a classic image of tranquil, eternal Asia.

Appearances deceive. In recent decades, the way of life in rural Bac Kan has been buffeted by abrupt social transformations and squeezed by rapid population growth. Unable to grow enough food in their fertile but narrow valleys, farmers have increasingly resorted to tilling the surrounding hillsides.

Runaway deforestation, soil erosion and loss of biodiversity now threaten to erase any hope that the people of Bac Kan will ever succeed in lifting themselves out poverty.

Since the 1960s, the Green Revolution has brought unprecedented gains in rice yields, allowing most Asian countries to attain self-sufficiency in this essential grain, even as their populations exploded. However, almost all of the gains so far achieved by IRRI and its partners have come in the irrigated lowlands, which produce 75% of the world’s rice. Today, agricultural scientists are focusing more of their attention on fragile upland ecosystems. They aim to alleviate the grinding poverty that persists in these difficult environments and reverse the tide of environmental destruction that endangers the world’s last vestiges of pristine wilderness, such as Vietnam’s Ba Be National Park.

“A farm family’s first priority is their own food security, which means growing enough rice to feed themselves from one harvest to the next,” explains Jean-Christophe Castella, a specialist in agricultural production systems who works with IRRI. “They’ll try to get rice sufficiency from the lowlands — which here in the mountains means the valley bottom. If their needs aren’t covered, and they have labor available, they’ll crop the uplands.”

The catch is that upland fields don’t last. After a few harvests of maize or upland rice (a dry-field crop like wheat), the soil is typically capable of supporting only the root crop cassava, then nothing. “Cassava is derided as a soil killer, because nothing can follow it,” says Dr. Castella, adding that farmers must then clear new fields. “But cassava grows in infertile soil and is a good risk reducer, because you can harvest it in two years to feed the pigs, if the maize fails.”