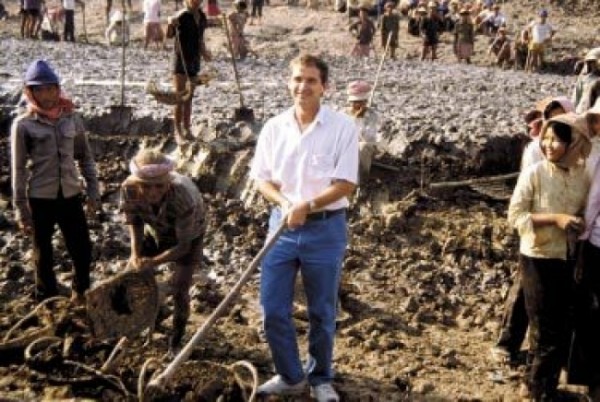 Dr. Harry Nesbitt pitches in during construction, in 1990, of one of the earliest post-war irrigation canals (Photo: IRRI)

On a rooftop overlooking Phnom Penh, two Australians pulled the stopper from a bottle of Russian champagne and proposed a toast. It was a poignant snapshot, the surrounding buildings blackened by mildew and war, and the brown-puddled streets devoid of life.

The year was 1988. The champagne was warm, the toast somber. The two men, Harry Nesbitt and Glenn Denning, were poised at the start of an arduous journey that would challenge their courage, endurance and ingenuity beyond anything a couple of agricultural scientists could reasonably anticipate.
The task demanded of them was to revive the ancient rice culture of the Khmers, to breathe life back into the killing fields.

As the pair sat in the heavy tropical silence, they felt the full weight of their burden. Cambodia was isolated from the Western world— a country where people starved, landmines killed and maimed desperate farmers, and the Khmer Rouges, driven from the capital eight years earlier by the Vietnamese army, still posed a threat from their jungle redoubts.

Almost all knowledge of traditional rice farming practices had been lost — the varieties and their traits, soil characteristics, irrigation and drainage, plant breeding, cultivation techniques and pest management. The country’s trained agriculturists had either been murdered or forced to flee. Farmers had suffered forced relocation and now worked unfamiliar soils and terrain. To cap it off, most of the seed of traditional Cambodian rice varieties had been eaten, and many farmers were now struggling with unsuitable Chinese varieties introduced by the Khmer Rouge.

The story of Drs. Nesbitt and Denning (in particular of Dr. Nesbitt, who would be the long-term man on the ground) celebrates the rebuilders, the heroes that the chronicles of war rarely mention.