It started with five seed minikits in 2013. Today, more than 75% of the farmers in Katindol Village are growing Swarna-Sub1. 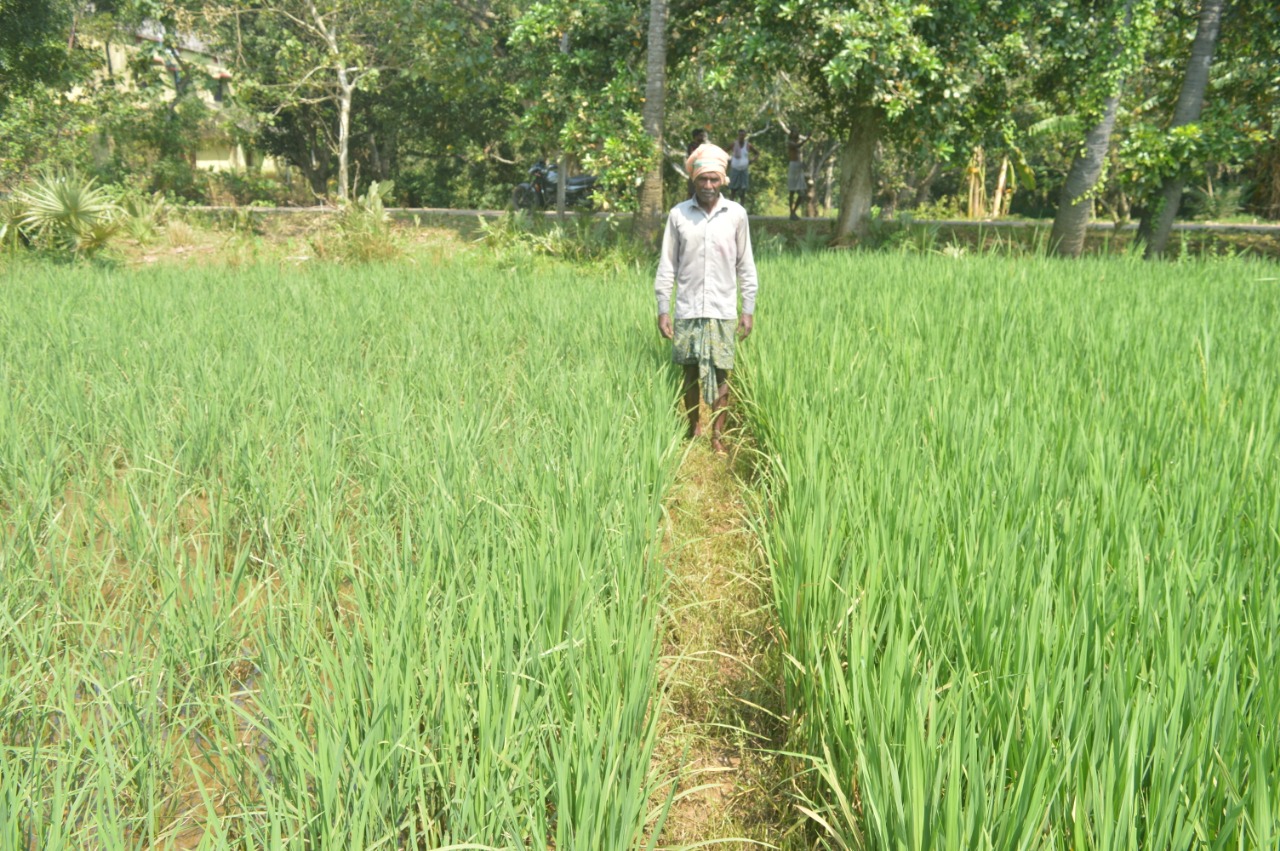 A month after flooding the Swarna-Sub1 plants (right) have fully recovered compared with the Swarna plants. (Photo: IRRI India)

.
“Swarna-Sub1 came as a blessing for us when we received a seed kit from IRRI five years ago,” said a delighted Niranjan Jena, a marginal farmer from Dhamnagar Block in the Bhadrak District of Odisha, India. “Little did I know that this variety would be a game changer in this region thanks to its submergence-tolerance trait.”

A large swath of rice-growing land in Bhadrak is geographically low-lying and vulnerable to flash floods that cause substantial crop damages almost every year. Majority of the farmers from this state are small and marginal. Because of their situation, the farmers’ resiliency to the increasing frequency of extreme weather events such as droughts, floods, and salt water intrusion in the face of climate change is abysmally low.

But, aside from rice, no other crops are recommended for growing, particularly in the kharif season, because of their low-lying farms. Moreover, rice production in this area is critically important to meet the needs of the vast rice-consuming population. As such, it makes more sense to grow rice varieties that are adapted to prevalent environmental stresses like floods.

A solution to the climate calamity
The International Rice Research Institute (IRRI), with its intensive and innovative seed scaling program in Odisha, has been promoting Swarna-Sub1. The rice variety incorporates the SUB1 gene into the Swarna, the most popular variety in India. The SUB1 gene makes Swarna-Sub1 resilient to flooding of up to 17 days while retaining the desirable traits of the original variety.

Although the stress-tolerance trait of Swarna-Sub1 has been acknowledged by seed system stakeholders, including the Odisha State Seeds Corporation (OSSC) and the State Department of Agriculture, not many farmers know about this variety or have access to reliable sources of its seeds. In fact, Swarna-Sub1 has reached only 35% of the potential area in the entire state, according to an estimate by the OSSC.

Therefore, the challenge is to convince farmers about the benefits of Swarna-Sub1 and employ the help of progressive farmers who play a key role in varietal dissemination. 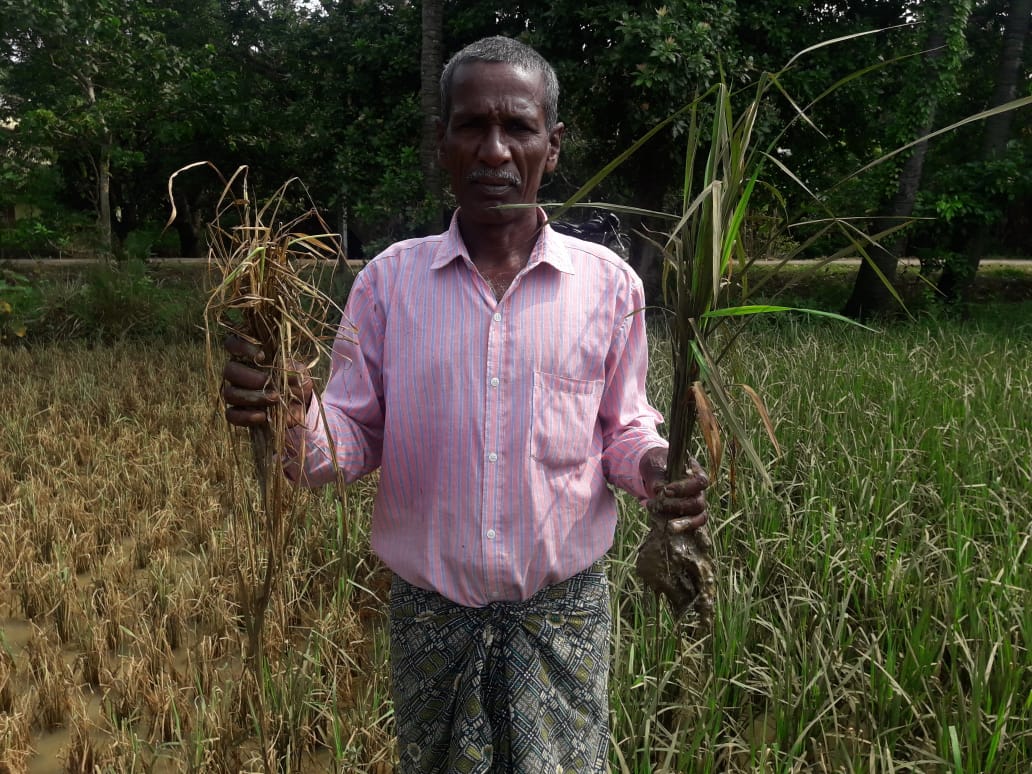 A farmer shows the difference between Swarna (left) and Swarna-Sub1 after eight days of flooding that hit Katindol in September 2018. (Photo: IRRI India)

.
One farmer’s story
Very few farmers in Katindol Village in Dhamnagar have heard of Swarna-Sub1 and no one in the village has grown this variety before.

In 2013, as part of its promotion of stress-tolerant rice varieties, IRRI randomly selected five farmers in the village. Each farmer received a 5-kilogram minikit of Swarna-Sub1 seeds and information on the benefits and advantages of the new variety over traditionally grown varieties in the area. At the time Swarna was the most popular variety grown in the village. But it is highly vulnerable to the flash floods that hit the farming community hard every now and then.

One of them was Mr. Jena.

“I knew nothing about this variety,” he said. “IRRI officials described its ability to survive floods of up to 15 days. I was initially apprehensive but I decided to give it a try.”

He planted Swarna-Sub1 in small patches of his land and Swarna, the variety he had been growing for 15 years, in the adjacent plot. Unfortunately, his farm was flooded, triggered by a heavy downpour, a month after transplanting the seedlings. The swollen Baitarani River nearby also inundated large stretches of rice areas. Both varieties were under water for 10 days.

After the flood water ebbed, the stark contrasting picture of his two plots emerged which was exciting and encouraging. Swarna-Sub1 eventually grew back and stood tall and nearly unaffected. On the other hand, the Swarna field showed little hope for regeneration. This was substantially rewarding as he harvested 140 kg (4.4 tons/ha) of Swarna-Sub1 against only 80 kg (2.5 tons/ha) Swarna from about 320-meter square plot.

“This is the advantage of Swarna-Sub1,” said Mr. Jena. “It will give assured yield even after a flood.  At the end of the season, it was worth experimenting. I am happy and so are the other farmers.”

In 2018-19, Mr. Jena—now recognized as a progressive farmer—has grown Swarna-Sub1 in all his plots after his experience.

Mr. Jena did not stop here; he went on to spread the benefits of cultivating Swarna-Sub1 to other farmers in the village and shared its seeds with his neighbors. Slowly but steadily, more farmers started planting Swarna-Sub1 in Kantidol. 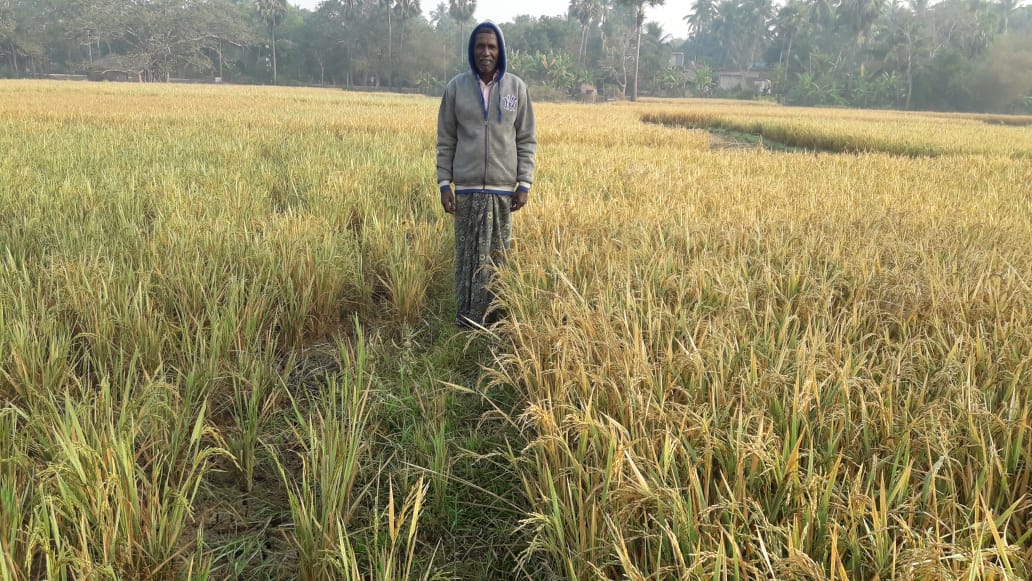 The visible difference in the yield of Swarna (left) and Swarna-Sub1 during a cropping season that was marred by flooding. (Photo: IRRI India)

.
The power of engagement
Today, more than 75% of the 200 farmers in the village are growing Swarna-Sub1 instead of Swarna. Some farmers continue to grow Swarna in small patches because of its grain color and long-standing emotional attachment to it. But there is almost full coverage of Swarna-Sub1 in areas where it is recommended for growing.

Remarkably, all this happened in the last five years with only five minikits of Swarna-Sub1. This reinforces the strategy of engaging farmers to boost the adoption rate of a variety.

The village farmers say growing Swarna-Sub1 is financially more rewarding than regular Swarna. When the yield is assured even in the event of calamities farmers do not suffer from loss of income. Thus, this variety had a positive impact on the livelihood of rice growers in the village.

“It is amply proven and we must not doubt the superiority of Swarna-Sub1 over Swarna anymore,” said Mr. Madhab Chandra Hati, a farmer who waited before adopting but is now a strong advocate of the variety. “That is the reason why every farmer in the village has adopted Swarna-Sub1.”

What started out as five seed minikits given to a handful of farmers in 2013 has become a success story for varietal adoption for almost all farmers in this village and it continues to stabilize farmers’ income substantially.

“The new variety holds the key to the betterment of the farmers,” concluded Mr. Jena. “That’s why I keep telling my fellow farmers to be variety wise.”