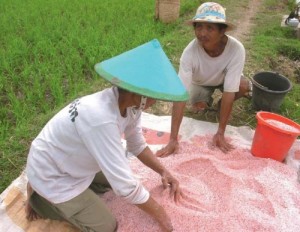 The largest expense for rice farming after labor is typically the purchase of fertilizers. Fertilizer prices have dramatically increased in recent months, making it ever more important that rice farmers use the most profitable fertilizer management practices for their growing conditions. This requires farmers to select a combination of fertilizer sources, timing, and dosages that provides the highest incremental increase in rice yield per added cost. Such a selection can involve complex decisions for farmers, which are made even more daunting by the myriad available fertilizer sources and recommendations.

Fortunately, a partnership of national and International Rice Research Institute scientists across Asia have, through nearly 15 years of research, developed an improved site-specific nutrient management (SSNM) approach for rice. This approach—which enables farmers to effectively apply the three major plant nutrients (nitrogen, phosphorus, and potassium) as and when needed by their rice crop—has consistently increased rice yields and profi t in on-farm evaluations across Asia.

The SSNM approach is a relatively knowledge-intensive technology in which optimum fertilizer management for a rice field is tailored to specific local conditions for crop yield, growth duration of the rice variety, crop residue management, past fertilizer use, and input of nutrients from organic materials and sediments.

Such knowledge requirements have slowed the wide-scale promotion and uptake by farmers of SSNM. Uptake by farmers has also been constrained by confusion arising from the contrasting, and often contradictory and competing, recommendations for nutrient management received from different sources.

IRRI has consequently worked with partners in both the public and private sectors to consolidate existing knowledge on nutrient best management practices into concise principles and guidelines accepted and promoted across multiple research and extension (technology dissemination) organizations. Now, to facilitate the consolidation and dissemination of such intensive knowledge, scientists have developed easy-to-use, interactive computer-based decision tools for extension workers and farmers.

In Indonesia, IRRI and partner organizations within the Indonesian Agency for Agricultural Research and Development have worked together to consolidate divergent soil testing, soil mapping, and plant-based approaches into one concise national nutrient management guideline for rice now disseminated throughout the country. Scientists developed in 2008 software named Pemupukan Padi Sawah Spesifik Lokasi (Rice Fertilization for a Specific Location). PuPS, as it is known, consolidates existing knowledge from years of research. PuPS, along with an associated training module, was ceremonially released by President Susilo Bambang Yudhoyono during the Indonesian National  Week in July 2008. The PuPS CD is being distributed to extension workers across the country through Indonesia’s Assessment Institutes for Agricultural Technology.

In the Philippines, IRRI scientists, in partnership with public and private-sector organizations, have developed a similar tool. Named Nutrient Manager for Rice, it is tailored to rice-growing conditions in the Philippines. In September 2008, the Philippine Department of Agriculture began distributing the Nutrient Manager CD—which is available in five dialects—to local extension agencies throughout the country. In the fourth quarter of 2008, country-specific  versions are set for evaluation in Bangladesh, Vietnam, and the Indian state of West Bengal. Nutrient Manager for Rice and PuPS are designed to help agricultural technicians quickly formulate fertilizer guidelines tailored to specific rice fields or rice-growing areas. These decision tools consist of about ten multiple-choice questions that can easily be answered by an extension worker or farmer. Based on responses to the questions, a fertilizer guideline with amounts of fertilizer by crop growth stage is provided for the rice field. This helps farmers increase their yield and profit by applying the right amount of fertilizer at the right time.

These tools enable farmers to select the least expensive combination of fertilizer sources for meeting the nutrient needs of their rice crops. Fertilizer rates and timing are adjusted to accommodate a farmer’s use of organic sources of nutrients. They accommodate transplanted and direct-seeded rice, including inbred and hybrid varieties with a range of growth durations.

The guidelines are consistent with the scientific principles of SSNM for rice, which are based on years of research across Asia. These principles are available in the book Rice: A Practical Guide to Nutrient Management, which was released in July 2008 in Bahasa Indonesia and is now being released across Asia in other local languages.