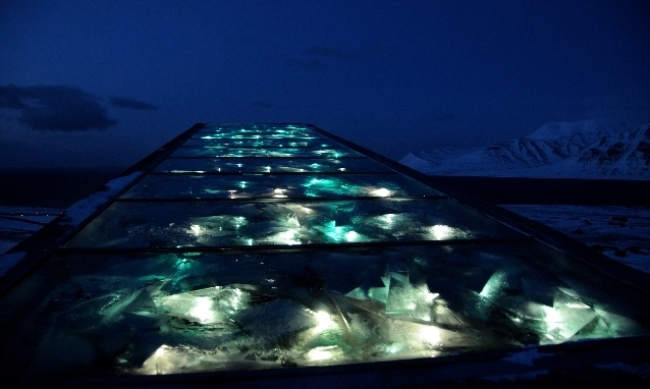 The first was a footprint on the Moon. The second one is a freezer.

This freezer, however, is one dug deep inside a frozen mountain about 1,130 kilometers from the North Pole, in the archipelago of Svalbard, Norway. Tucked away in this giant refrigerated vault is the foundation of humans’ food—seeds. Neatly packed and frozen to withstand hundreds of years of storage and just about any conceivable destructive force known to humans are duplicates of seeds of different crops from all over the world, including more than a hundred thousand seeds of different rice types.

The International Rice Research Institute (IRRI) sent its final batch of rice seeds to the Svalbard Global Seed Vault, dubbed the “Doomsday Vault,” in November 2010. IRRI deposited the largest shipment of 70,180 for the inauguration of the Vault in February 2008. Following its last shipment, IRRI now has the largest number of accessions, amounting to 112,807, for any single crop and its wild relatives kept in the Vault.

“The IRRI-IRG is earthquake-proof, typhoon-proof, and flood-proof,” Dr. Sackville Hamilton explains. “We also have an independent backup power supply to protect against power cuts, and we keep a supply of spares in stock to deal rapidly with equipment failure. We also have a backup collection to the primary collection kept at IRRI that is untouched, but provides immediate backup.”

Dr. Sackville Hamilton said that, since 1980, IRRI has also been keeping another backup of the IRRI-IRG collection at Fort Collins, Colorado, in the United States. “The United States’ environmental and political risks are different from those in the Philippines,” he further explains. “This backup collection in Fort Collins adds to the safety measures being taken at IRRI.

“The collection kept in Svalbard is our ultimate backup. We cannot conceive of any other measure we could take to make it safer. We cannot think of a more secure system to safeguard this vital resource.”

Life’s frozen cellar
The frozen mountains, the isolation, and the polar bears that provide extra layers of security are just some of the reasons why the world’s agricultural heritage found itself a fortress in Svalbard, Norway.

According to the Global Crop Diversity Trust, “The technical conditions of the site are virtually perfect. The location inside the mountain increases security and unparalleled insulation properties. The area is geologically stable, humidity levels are low, and it has no measurable radiation inside the mountain. The Vault is placed well above sea level (130 meters), far above the point of any projected sea-level rise.”

The Trust is a public-private partnership that raises funds from individual, corporate, and government donors to establish an endowment that will provide complete and continuous funding for key crop collections.

The Trust explains that, even if the supply of electricity gets cut off, the frozen mountain and its thick rocks will keep the seeds frozen for a long time. The Vault, constructed by the Norwegian government as a “service to the world,” is managed under terms between the Global Crop Diversity Trust, the Norwegian government, and the Nordic Genetic Resource Center.

The International Treaty on Plant Genetic Resources for Food and Agriculture in 2004 provided the platform through which an international legal framework for conserving and accessing crop diversity, as well as building the Vault, became a reality. 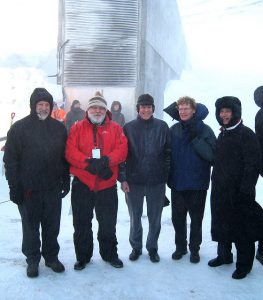 Although thousands of rice species exist around the world, only a few of these are being cultivated. These cultivated rice varieties are naturally diverse. This diversity, however, is not enough to build better varieties. It is, in this case, more than in any other, that the extraordinary diversity in rice and its wild relatives becomes crucial.

For decades, scientists have been scouring the unbeaten path of the vast wild rice gene pool to look for genes that allow them to develop rice that provides more yield and is tolerant of stresses such as drought, heat, flooding, and saline soil.

Among the major setbacks to food production today is the increasing scarcity of resources. Hence, we look more closely at rice, and at every other crop species, to find ways to unlock the many secrets of its gene pool and help it adapt, survive, and thrive despite the many challenges.

Such is the story of “scuba rice”—the IRRI-bred variety that can withstand being submerged under water for 2 weeks (see Scuba rice). Many years ago, an Indian low-yielding rice variety called FR13A caught the imagination of scientists due to one remarkable trait: flood tolerance. For years, scientists looked for the genes that gave FR13A its flood-resistant characteristic. And, when they found it, they named the gene “SUB1.”

Today, high-yielding varieties that had been given the flood-resistance gene are helping rice farmers cope with frequently flooded rice fields. The wonderful story of the previously unremarkable FR13A highlights why the world should be worried about vanishing plant species and rice varieties.

Treasure on loan
A nuclear holocaust need not happen to spell doomsday for food sources. Every day, a crop species is lost to typhoons, floods, war, and, sometimes, to simple things like mismanagement or lack of a sustained power supply.

It is hard for some people to appreciate the importance of conservation. But, thinking of crop conservation as a way of keeping a good credit record may help, because “biodiversity, the world’s most valuable resource, is on loan to us from our children.”

Diversity is the insurance for food security. Every time a species is lost, that diversity narrows, which means that the number of options shrinks as well. There is something “in” these vanishing varieties that is priceless: genes. These genes hold the many answers to questions on basic survival and sustaining life on the planet.

Food for the next generation
Backing up and protecting the world’s diverse agricultural heritage are giving this generation, and the next, options to get around nature’s roadblocks as the human population grows, while the resources that are needed to meet the corresponding demand for nourishment become scarce.

These “options” are kept frozen, ready to be retrieved when events of the future require it. It is a way of ensuring that food keeps coming even well after this generation has passed on.
____________________
Ms. Baroña-Edra is a science communication specialist with IRRI’s Communication Unit.