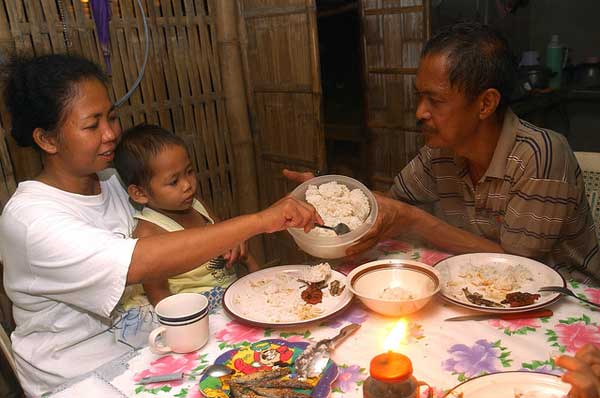 Filipinos eat an average of 123 kg of rice per person every year; for them a meal isn’t a meal without rice. (Photo: IRRI)

This year, the Philippines is celebrating its National Year of Rice, which is focusing on achieving rice self-sufficiency, improving the income of rice farmers, and promoting better health among rice consumers. As part of the National Year of Rice, the Philippine government is encouraging Filipinos to eat “just the right amount of rice” and expand their diets to include bananas, sweet potatoes, and maize.

So, what does rice have to contribute to a healthy diet?

Rice is the leading source of sustenance for all Filipinos. In 2009, the country had an average annual rice consumption of 123 kg per person—among the highest in the world. Filipinos spend more on rice than any other food, according to the Bureau of Agricultural Statistics (BAS). The BAS survey showed that Filipinos, especially those from low-income households, are depending solely on rice more than ever for their daily dietary energy supply and dietary protein because it remains the most affordable food in the country.

However, Dr. Eufemio Rasco, executive director of the Philippine Rice Research Institute (PhilRice), points out that the increasing consumption of rice coupled with the decreasing intake of other foods can contribute to an unhealthy diet.

Not by rice alone

Rice mainly contains carbohydrates, which are an excellent source of energy, but it does not provide all the nutrients required for a healthy diet when it is eaten alone. This could lead to deficiencies in micronutrients such as iron, zinc, and vitamin A.

Micronutrient deficiency can occur when rice makes up most of the daily diet. It significantly affects the lives and health of around 2 billion people worldwide, with 26% of all children under the age of five being stunted and 31% suffering from vitamin A deficiency, according to the Food and Agriculture Organization. And the Philippines is not exempt. Approximately 1.7 million Filipino children (6 months to 5 years old) are vitamin A deficient.

Supplementing a rice-based diet with a diversity of other nutrient-rich foods is an effective way of ensuring a nutritious diet (Photo: Isagani Serrano)

Supplementing a rice-based diet with a diversity of other nutrient-rich foods is an effective way of ensuring a nutritious diet.

“A healthy nutrition tip for a rice-based diet is to consume rice with lean meat, poultry, fish, or shellfish; legumes; and vegetables,” says Dr. Maria-Bernardita Flores, executive director at the National Nutrition Council of the Philippine Health Department. “Eat a variety of foods every day.”

However, the stark reality is that many people simply cannot afford or access a diverse and healthy diet that includes a range of nutritious foods alongside rice. IRRI shares the Philippine commitment to addressing malnutrition and is developing rice with more iron (see “Iron-clad” rice), zinc, and beta carotene (a source of vitamin A) to help people get more of these important micronutrients. (See Golden grains for better nutrition.) High-nutrient rice could be an effective way to provide many rural and impoverished households in Asia with improved nutrition because rice is already widely grown and eaten in these regions.

The Philippine government is also promoting the consumption of brown rice.

Not a specific variety, brown rice refers to any kind of rice that still has its outer layer of bran and the germ— where most of the nutrients (such as niacin, thiamine, and phosphorus) are found. Moreover, brown rice is rich in insoluble and soluble fiber. Soluble fiber slows down digestion and can lower bad cholesterol, while insoluble fiber helps relieve constipation. The two types of fiber work together to promote a healthy digestive system.

Despite its health benefits, brown rice consumption remains low in the Philippines (and across other parts of Asia) compared to white rice. Cielito Habito, former director general of the Philippines National Economic and Development Authority, reported on brown rice consumption in his column No Free Lunch in the Philippine Daily Inquirer. Dr. Habito’s article explains that before rice mills were introduced to the Philippines and neighboring countries a century ago, pounding the grains was the only processing available and so people ate only unpolished or brown rice. The advent of modern mills made pounding of the grains unnecessary and eventually Filipinos shifted to eating polished or white rice. Brown rice disappeared from dining tables as more Filipinos shifted to eating white rice. It was soon seen as an inferior, “dirty” product. While white rice was considered “modern and sophisticated,” brown rice was associated with poverty. But in recent years, the tables have turned in favor of brown rice.

He is also a rice farmer who sells brown rice and he says business is good as more Filipinos are realizing the product’s health benefits. “My supply of brown rice does not last into the next season and we sometimes run out of stocks to sell.”

Brown rice is popular among well-informed, middle-class professionals, but not the vast majority of Filipinos. However, Dr. Mamaril feels more Filipinos should eat brown rice.

“Based on testimonial evidence, people consume less rice when they eat brown rice,” he says. This could lead to lower per capita consumption of rice and could help solve the country’s perennial rice shortage.”

He admits that some barriers exist that make consumers shy away from brown rice, but he believes these can be overcome. “Many people don’t like the rough texture of cooked brown rice. This is probably due to improper cooking,” Dr. Mamaril says. “People who cook it for the first time follow the usual way of cooking white rice where they add water to rice at a ratio of 1:1. It should be a 1:2 ratio of rice to water. They should also soak it in water for at least 1 hour before cooking.”

“Most of the brown rice sold commercially is likely a mixture of different varieties with different amylose content giving the product an uneven texture,” he explains. “But, if you use one variety with medium amylose content, you don’t even have to soak it in water. You need more water and the time of cooking may be longer but the cooked brown rice will be soft.”

But it is the price of brown rice that is really preventing more people from buying it, Dr. Mamaril says. Brown rice is more expensive because there is a smaller supply; plus it has a shorter shelf life. According to him, adding to the cost of production is that most mills in the country are not set up to process brown rice, so the cost of milling brown rice—even though it requires less processing—is higher.

Although brown rice is the darling of many nutritionists, polished or white rice has sometimes been placed on the opposite end of the spectrum. It has been blamed by some as being one of the worst foods for diabetics.

All foods are assigned a glycemic index (GI), which measures how rapidly food can raise blood sugar after consumption. High-GI foods can increase the chances of getting diabetes, and make management of type 2 diabetes difficult, while foods with a low GI are considered healthier.

“Rice has previously been classified as a high-GI food,” says Melissa Fitzgerald, former head of IRRI’s grain quality research. “But this single GI classification for all rice is turning out to be ill informed.”

In 2011, Dr. Fitzgerald’s IRRI team and her colleagues at the Commonwealth Scientific and Industrial Research Organisation in Australia published research that showed the GIs of 235 varieties of rice from different rice-growing countries were more varied than previously thought.

“Our research showed that there was large variability in GI between the different varieties of rice—ranging from a low of 48 to a high of 92, with an average medium GI of 64,” Dr. Fitzgerald says.

The identification of low-GI rice varieties makes it possible to conduct studies on the effect of low-GI rice on people with metabolic health problems. This information will be useful in developing long-term public health strategies and management plans for people with diabetes.

In the Philippines there is a popular saying that goes “if you haven’t had your rice today, then you have not eaten.”

The good news is that rice can be part of a healthy diet. Consumers can choose brown rice or low-GI rice for additional health benefits. Plus, rice can be combined with other healthy foods to provide complete nutrition. And, with the potential coming of high-nutrient rice—even consumers with limited choices who are likely to keep eating high quantities of rice may be able to obtain a more nutritious diet.

Mr. Alaric Santiaguel is the associate editor of Rice Today.