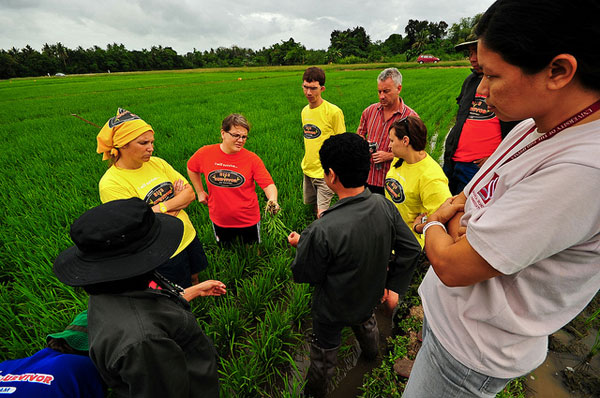 Rice survivors talk about their plans and strategies for the entire dry season series of Rice Survivor. (Photo: Isagani Serrano)

A diverse array of 20 IRRI scientists and scholars gathered in the great outdoors of the IRRI Experiment Station in December 2012 to take up a 6-month-long farming challenge aptly called Rice Survivor. Divided into four teams, they competed to see who could produce the highest-yielding rice crop most efficiently and sustainably. This unique project could be called IRRI’s first reality show.

“On their relatively small patch of land (1,240–1,600 square meters each), the four Rice Survivor teams had to plan their land preparation, come up with a water management regime, sow seeds or transplant seedlings, look out for pests and diseases, hand-pull some weeds, and decide on various management approaches to use,” said Nicola Wunderlich, agronomy extension specialist at IRRI’s Training Center. “They then had to harvest their crop and compare results.

“They had to plan the season ahead including all the steps involved in between,” she said. “Participants recorded the sources of information that they used in making their crop management decisions. We especially wanted to know how much IRRI’s Rice Knowledge Bank (RKB) was helpful for them.”

According to Rice Survivor coorganizer Katie Nelson who is also an agronomy extension consultant at IRRI, “In its current state, the RKB is a great source of technical information. It’s just like a textbook—useful for students and researchers. It explains ‘what a technology is’ but, provides less information on ‘why’ or when a technology could be used.

“Our survivor teams discovered that there are gaps of practical information in the RKB and so we will focus on improving this,” Ms. Nelson said. “Much of the information about managing a rice crop came from colleagues, experts, published research, among other sources. Ideally, the RKB should be the primary source of information on rice production and we are working towards this goal.”

The RKB was launched in 2002 when the Training Center decided to bring together all current validated rice-farming knowledge from IRRI. The idea is for it to become a one-stop shop of online information for extension and farming communities in partner countries (see Banking our rice knowledge).

The four teams of five persons each imaginatively named themselves: Matatag (Filipino for strong), Hayahay (Filipino for comfortable), the Double Trouble Makers, and the Future Techs.

The men and women team members were a mix of nationalities (seven countries) and scientific backgrounds, but with no experience in actually growing a rice crop. Their disciplines included molecular biology, social science, geography, education, computer science, and horticulture.

Matatag team members hailed from India, Myanmar, USA, and the Philippines. “We chose wetland preparation because it’s traditional and we thought it would be a good experience for us,” said Jason Beebout, a consultant at IRRI and currently working with the Cereal Systems Initiative in South Asia- Bangladesh project.

Members of Team Hayahay brought a wide range of experiences to the competition. “We picked certified seed of the Philippine rice variety NSIC Rc 222 that was bred at IRRI,” said Adam Sparks, a plant disease management specialist in IRRI’s Crop & Environmental Sciences Division (CESD). “Our yield goal was an ambitious 7 tons per hectare,” he added. “We did traditional transplanting and traditional primary dry tillage; and then, we puddled the field. After that, we did a secondary wet tillage and then a final smoothing before we transplanted.”

“Our team decided to do a regular puddled and transplanted field,” explained Sarah Beebout, a soil chemist on Team Double Trouble Makers. “We decided on this traditional cultivation because there are a lot of weeds here in this part of the research farm.
And, it’s very well-suited for lowland rice production.

“We also tried mechanical transplanting rather than hand transplanting of two different varieties,” Dr. Beebout added. “In one half of the plot, we tried a popular cultivar, NSIC Rc 222, while in the other half, we tried traditional variety Pirurutong, which has purple grain.”

Team Future Techs was the only group that tried direct seeding. “We opted for mechanized seeding using a 4-wheel tractor attached to a seeder,” said Bhagirath Chauhan, a weed expert. “We think the future of rice farming is in mechanization because getting labor at critical times such as transplanting is becoming more difficult,” he explained.

The diversity of approaches the teams took in how to establish and manage their rice crops and the various management methods
employed reflects how farmers themselves operate and make decisions.

The first real physical challenge for the teams started with transplanting the rice plants. Everyone quickly realized that this is hard work!

“It’s my first experience to pull out the seedlings and sow them row by row,” said Valerien Pede, an economist on Team Hayahay. “It was quite challenging. When I looked back and saw how crooked the rows were, I said to myself, ‘Wow, they look terrible!’” related Dr. Pede. “I checked what the more experienced guys were doing and then realized I was not doing it right. So, I adjusted. Anyway, I enjoyed the learning process.”

After transplanting, the challenges kept rolling in. There were a few surprises, which worked well for some, but not so well for others.

For example, Team Double Trouble Makers experimented with alternate wet and dry irrigation, which entailed keeping the plot dry for some time. Unfortunately, a well-meaning farm worker irrigated their plot, plus water seeped in from the adjacent plots. So, they switched back to the more traditional continuous flooding irrigation.

The curse of the snails

Golden apple snails were one of the most serious concerns for all competitors. “You can take one step, and maybe pick up 50 snails, and then take another step and do the same, said Jason Beebout. “It’s overwhelming.”

In the beginning, his team was looking at a good crop stand of one to two tillers per hill, but they had to replant after the snails had a chomping frenzy on their seedlings. “One thing that I’ve learned is that we should have thought about snails before the seedlings ever went into the ground,” Mr. Beebout said.

Team Future Techs didn’t have any problem with snails because they went for dry direct seeding, so they didn’t irrigate their plot. But, they had to contend with their own problem when using this practice—weeds.

“We didn’t get it right at the start of the season,” said James Quilty, a postdoctoral fellow in CESD. “Our crop establishment was poor and as for crop protection, there wasn’t any. They direct seeded their plot right before the start of the Christmas season. With the Institute closed for the holidays, by the time the team returned to its plot in January, lots of weeds were there.

“Since we did not use herbicides, we had to pull the weeds with our bare hands,” said Dr. Quilty, “and it was very labor-intensive.”

Like Team Future Techs, Team Hayahay also had a weed problem. “One thing that came through for us was the need for a leveled field,” said Noel Magor, head of IRRI’s Training Center. “The middle part of the plot was slightly higher. You can actually feel the difference when weeding. Weeding the part, which had less water, was very tough. Next time, I’d encourage laser leveling because a level field makes water and weed management much easier.”

Most participants helped rival teams during the labor-intensive transplanting, weeding, and other farm activities.

“It didn’t feel like several teams working for themselves in individual plots. It was more like one big team working together across several plots,” said Dr. Quilty. “Rice Survivor gave us an opportunity to really know some IRRI colleagues with whom we normally wouldn’t otherwise interact. Even if it’s just for advice, we know now whom to ask.”

Rowena Oane, a biochemist who spends most of her time in a molecular lab at the Plant Breeding, Genetics, and Biotechnology Division, learned to appreciate the management aspect of growing a rice crop. She also found that succeeding in rice farming requires three key factors: technical knowledge, time, and resources.

“Each team selected different rice-farming strategies enabling them to try different IRRI technologies and approaches,” said Rowell Dikitanan, an economist with Team Double Trouble Makers. “Now that I’ve become familiar with different ways of growing rice, it’s easier for me in my regular job when I interact with farmer-interviewees who are adopting similar technologies.”

Team Hayahay’s Man Marcaida, who works in water management in CESD, said, “Farming is a community undertaking. We started as competitors ready to beat the other teams, but instead we actually helped one another with various management activities, even coming up with collective decisions involving water management and controlling rats. It highlights that collaboration is very important for what we do here at IRRI.”

At the finish line

So how did the teams fare at the end of the challenge? Well, all “survived” with varying degrees of success.

The third criterion, sustainability, had to be dropped this time around. “Judging sustainability proved too difficult as the teams couldn’t measure the amount of water used and some other inputs,” said Ms. Wunderlich. “But, we are working on a possible assessment scheme for sustainability in a future episode of Rice Survivor.”

Beyond the fact that all the participants “survived,” special recognition was given to some exemplary survivors. Ms. Annie Barreto received the Proudest Farmer award since she was a standout in caring for her field on a daily basis. Dr. Magor was named Most Obsessive Weeder. Sarah Beebout won the Best Record Keeping award while Jason Beebout was named Most Altruistic. Ms. Rowena Castillo was the Best Communicator while Dr. Quilty was the Best Team Player.

“I think each team member came out a winner,” concluded Dr. Magor. “This challenge provided a rich practical experience for all participants in coming to grips with growing rice. It provided satisfaction for each person. The sense of solidarity and learning from each other and the IRRI Experiment Station staff was a plus for each of us and for IRRI.”