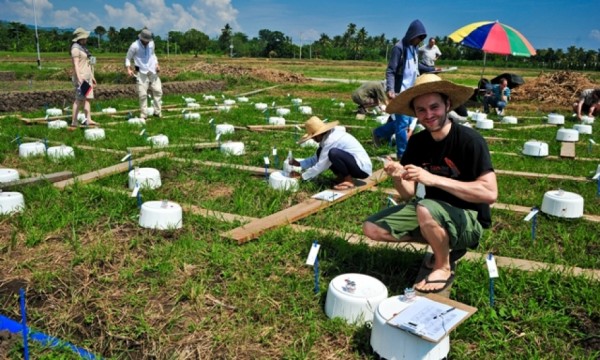 Germany’s government and scientists have supported the International Rice Research Institute’s (IRRI) rice research for more than 40 years. The country does not grow rice but it recognizes the importance of supporting rice research to meet global development goals.

German government funding to IRRI began in 1974. Currently, most of IRRI’s funding is received through the Federal Ministry of Economic Cooperation (BMZ), both as unrestricted funding to CGIAR, which flows to the Global Rice Science Partnership (the CGIAR Research Program on Rice), and in the form of collaborative projects through the German Agency for International Cooperation (GIZ).

IRRI-Germany partnership
The first IRRI-Germany scientific cooperation began in 1966 when a research fellow came to IRRI to work on bacterial leaf streak in rice. In the years that followed, German experts continued to shape IRRI’s research strategy and ensure the quality of its scientific output.

Under Dr. Klaus Lampe, who served as director general from 1988 to 1995, IRRI identified a new strategy for the 21st century and drew up a new organizational structure. Since then, all of the Institute’s research became program-oriented and several new frontier activities started under his leadership. (Watch related video.)

Overall authority for IRRI’s mandate and mission is vested in a Board of Trustees (BOT) composed of 15 members who are selected based on eminence in their respective fields, be it science, finance, or management. German nationals who served on IRRI’s BOT were Dr. H.W. Scharpenseel of the Institute of Soil Science at the University of Hamburg (1978 to 1983); Dr. D.F.R. Bommer of the German Council for Tropical and Subtropical Agricultural Research (1988 to 1993); and Dr. Kay Beese of the European Commission for Health and Consumer Protection (2002 to 2005).

In 1982, Dr. H.U. Neue joined IRRI as a soil chemist. From 1987 to 1996, he was head of the then Soil and Water Sciences Division. Several collaborative research projects at that time brought many young German scientists to IRRI, mainly working on crop physiology, pest management, soil science, microbiology, nutrient management, agricultural engineering, and economics.

German senior and junior experts work at IRRI through the Centre for Migration and Development (CIM). In total, 32 Germans have worked at IRRI, and the Institute currently employs four German nationals.

IRRI is also supported by the European Union (EU), of which Germany is a member.

Current rice research activities
With its strong technical expertise and resources, Germany continues to be an invaluable partner in IRRI’s mission of creating and delivering innovative rice science worldwide. Germany’s core funding to CGIAR underpins all IRRI’s work and is essential to its ongoing core activities. The following projects are currently supported by Germany:

Breeding better rice varieties
One of the programs supported by Germany through BMZ aims to develop new rice varieties that are tolerant of flooding during germination in direct-seeded systems. In another BMZsupported project, IRRI collaborates with the Leibniz Institute of Plant Genetics and Crop Plant Research to develop drought-tolerant varieties that are also flood-proof. These will be field tested in several Asian and African countries.

A joint scientific know-how and exchange program with Bayer CropScience aims to strengthen IRRI’s rice breeding efforts by improving the use of rice genetic diversity, disease management in rice, and capacity building in rice breeding, biotechnology, and physiology.

Tackling climate change
IRRI and other German research institutions are studying the different impacts on carbon, nitrogen, and water of flooded and nonflooded rice. With BMZ support, IRRI is also investigating greenhouse gas emissions from rice where farmers use water-saving technologies. And, to safeguard rice from a rapidly warming climate, IRRI works with the Max Planck Institute of Molecular Plant Physiology to develop heat-tolerant rice varieties in another BMZ-supported initiative.

Developing future rice production systems
Partly supported by Bayer CropScience, IRRI is exploring mechanized systems in maximizing the use of natural resources (such as land and rainwater) and external inputs (such as nutrients and labor). The Helmholtz Centre for Environmental Research also supports IRRI in developing ways to improve the ecological diversity of rice farms to combat pests.

With the help of the Max Planck Institute of Molecular Plant Physiology, IRRI’s initiative in South Asia aims to boost the development and deployment of new varieties, enhance the adoption of sustainable crop and resource management technologies, and become a catalyst for sound policies to drive economic growth.