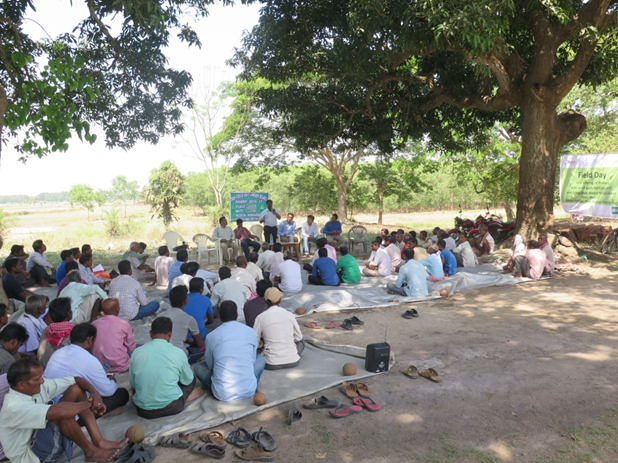 DoA and CSISA organize a field day in Rising Village in Puri to demonstrate seed-cum-fertilizer drill and best management practices for pulses.

ODISHA, India—The Department of Agriculture (DoA) of Odisha is pushing to increase the productivity of rice-fallow systems in the state by promoting mechanization and improved crop management for pulses.

Rice is typically grown as a single crop in rainfed lowland areas in most South Asian countries during the wet. This is season followed by fallowing at dry season. Incorporating dry season crops, such as pulses, into the rice-based cropping system could contribute to better nutrition and additional income for the farmers.

In Odisha, about 1.2 million hectares remain fallow after harvesting of the rabi rice crop. More than half of those areas are in the coastal regions of Balasore, Bhadrak, Mayurbhanj, and Puri Districts. Mung bean and black gram are grown on 70% of rice areas during the rabi season. Pulses grown in the rabi season constitutes almost 70% of total pulses area in the state but the productivity is only about half of the national average of 823 kg/ha.

“It is important to increase the productivity of the pulse areas throughout the district under different government schemes,” emphasized S. Chandrasekhar Rao, deputy director of Agriculture, Puri, Department of Agriculture and Farmers Empowerment. “I encourage participants to avail of the DoA’s soil testing facility and adopt best management practices for pulses.”

Under the centrally sponsored scheme of the National Food Security Mission, the DoA is collaborating with the Cereal Systems Initiative for South Asia (CSISA) for intensifying rice-fallow systems using a seed-cum-fertilizer drill and best management practices for pulses. On 29 March, the DoA and CSISA organized a field day in Resinga Village in Puri to demonstrate line sowing of pulses. Around 90 farmers and 10 service providers from different parts of the district participated in the field day which also included integrated weed management in pulses.