The development of inexpensive natural hydrogel technology has encouraged rice farmers in northwestern India to consider doing more direct seeding of rice instead of time-honored transplanting. Prior to the Green Revolution, they had not grown much rice here because of the semi-arid to arid climate, which provides only an average annual rainfall of less than 500 mm.

Although the Green Revolution enabled farmers in the region to grow more rice–from 0.5 million hectares (ha) in 1970 to more than 5 million ha in 2010–and enhance food security, it also contributed to environmental degradation through the higher use of pesticides and herbicides and excess nitrates and phosphates from fertilizers that leached into the soil led to water pollution and poor soil health. In addition, the introduction of anaerobic wetland rice-farming systems has increased the emissions of Earth-warming methane gas that emanates from rice production.

A farmer’s rice field in Karnal-Haryana. On the left, rampant weed growth using traditional DSR method. On the right, the same field using DSR and natural hydrogel technologies with delayed first irrigation at 15-20 days after sowing. (Photo by V. Lather)

With DSR, the seeds are directly sown like with any other cereal crop, either through dry or wet (pregerminated) seeding. Thus, it saves water, reduces labor requirements, and mitigates greenhouse gas emissions. DSR is the viable alternative to the water-guzzling transplanting, especially now in the face of severe water constraints, labor scarcity, and climatic change. With proper management, yields from DSR are comparable to transplanted rice.[3]

However, despite government incentive of USD 110/ha, farmers have been slow to adopt DSR because weeds suddenly appear with weekly irrigation. Many who tried DSR technology soon resumed transplanting their rice. And, under drought, DSR may have lower yields than transplanted rice,[4] especially when stress occurs during the early growth stages of the crop. The stress causes low or erratic seed germination, poor seedling and plant survival, inferior plant growth, and low dry matter accumulation. 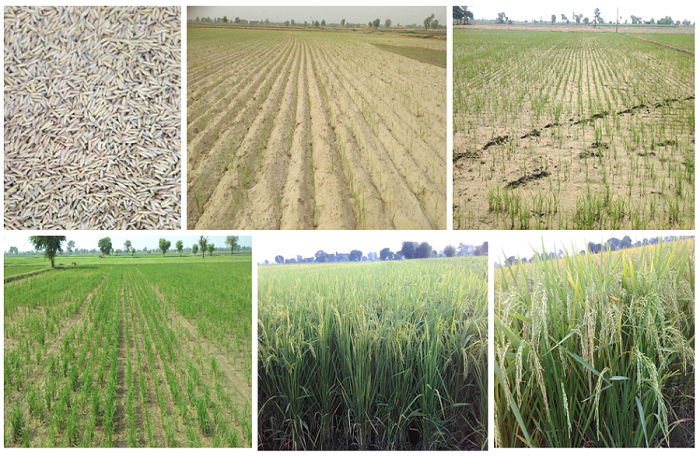 Improving soil quality with hydrogels
Synthetic and natural hydrogels, which can absorb water by osmosis and store significant amounts of water in the soil, have applications in agriculture. They can improve the water-holding properties of soils, reduce the need for irrigation, and improve soil permeability, reduce erosion and leaching, and improve seed germination and plant growth. Researchers at ICAR and the Indian Ministry of Agriculture have demonstrated that hydrogels, in general, can save water, utilize it efficiently, and produce more crops per drop of water.[5]

Synthetic hydrogels, which have been around in agriculture since the early 1980s, have not become popular among farmers because of their exorbitant cost (USD 10–20/kg), false and exaggerated claims, and environmental and health concerns as some of its components are considered nonbiodegradable and carcinogenic. Also, the water absorption of synthetic hydrogels is reduced by gypsum, a mineral widely used as fertilizer and in amending saline soils[6] making it useless in gypsum-rich and amended soils.

Because the hydrogel concept still had merit, a research team at ICAR’s Indian Agricultural Research Institute (IARI) in Karnal, decided to look at natural hydrogels. They identified several natural gums with a water absorption capacity about 100 times its dry weight. These include tragacanth (Goond Katira), sterculia (Goond Karaya), and xantham. These natural gums, which are locally available and derived from plants, are cost-effective (less than USD 2.50/kg). They are nontoxic and even edible. 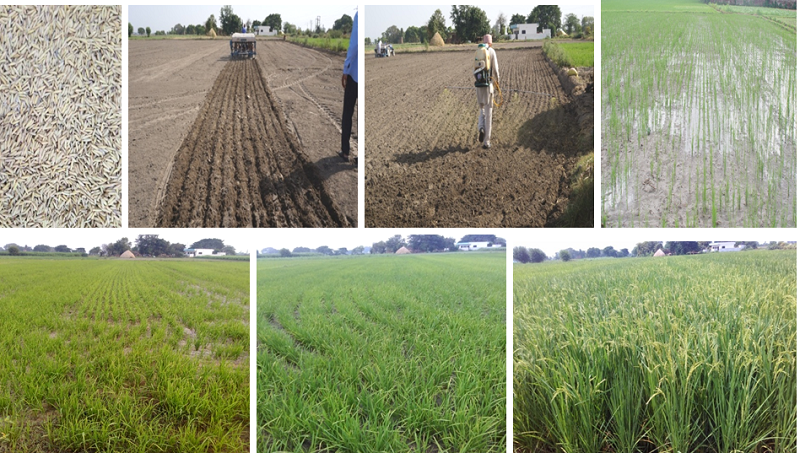 The researchers determined that these natural gums can be utilized for water conservation in rice and well as other crops[7] helping make agriculture more sustainable and resilient to climate change.

For example, seed coated with Goond Katira hydrogel (see photo below) can allow farmers to delay the first irrigation by two weeks in summer crops and four weeks in winter crops.

Research conducted during 2014–18 has also shown that coating seeds with natural hydrogels can delay wilting in seedlings and lower mortality in rice, wheat, barley, pulses, oilseeds, and other vegetable crops in farmers’ field trials and in large-scale field experiments. Using this technology reduces the water and energy consumption by nearly one third; there are cost reduction and environmental gains as well. The incidence of both pests and diseases is also lower. 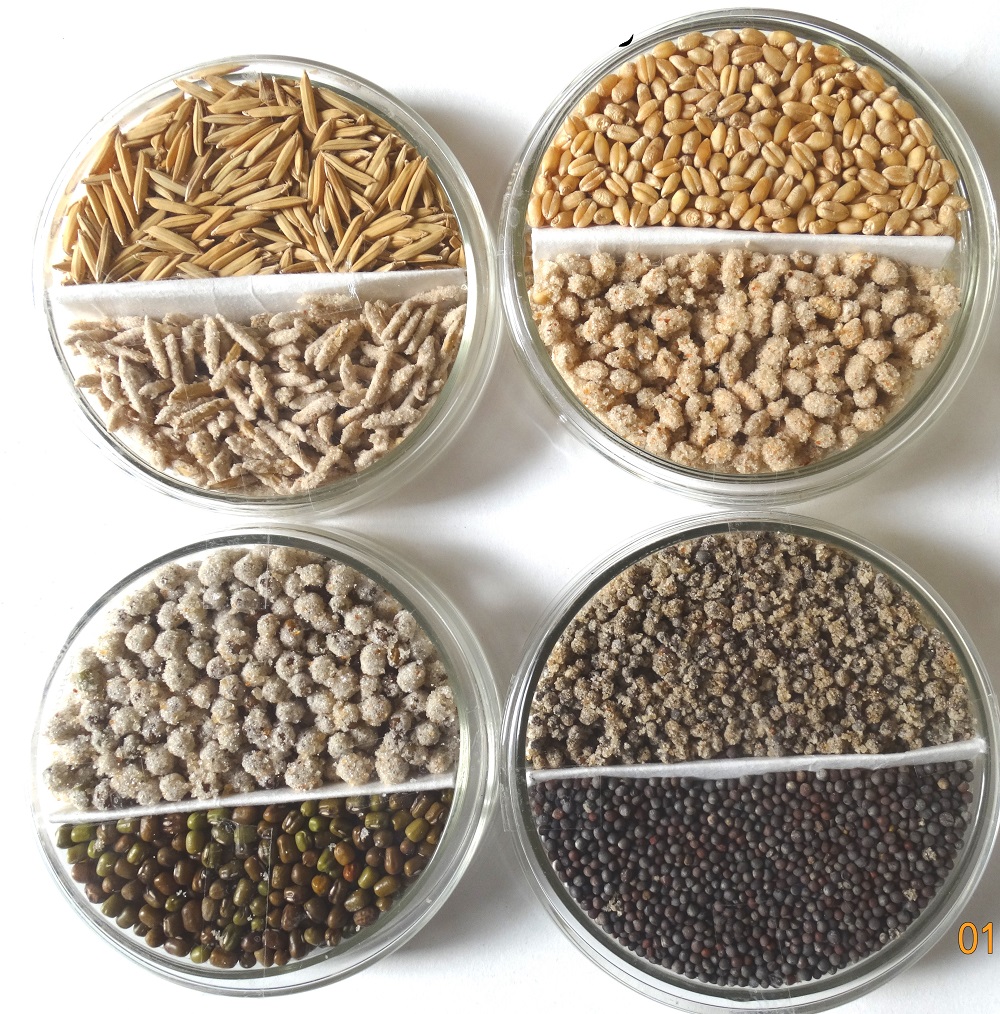 Different crop seeds with and without natural hydrogel coating. (Photo by V. Latther)

Attracting farmers’ attention
Farmers in Punjab-Haryana-Rajasthan have shown a keen interest in this technology during the 2016–18 cropping seasons. They have used the natural hydrogel technology on hundreds of hectares—even without government subsidies.

Rice farmers, even those from arid and semi-arid zones of Haryana Rewari, Bhiwani, and other regions, have successfully adopted the technology for DSR on a large scale. Compared to the high cost of labor and inputs for transplanting rice, the technology is saving them about 40% in irrigation, nitrogen fertilizers, and cultivation costs without any yield penalty.
_______________________
Dr. Latther is a former principal scientist at ICAR-IARI.