Partners in Tamil Nadu, India, have committed to further disseminating a range of technology options under the Cereal Systems Initiative for South Asia (CSISA). 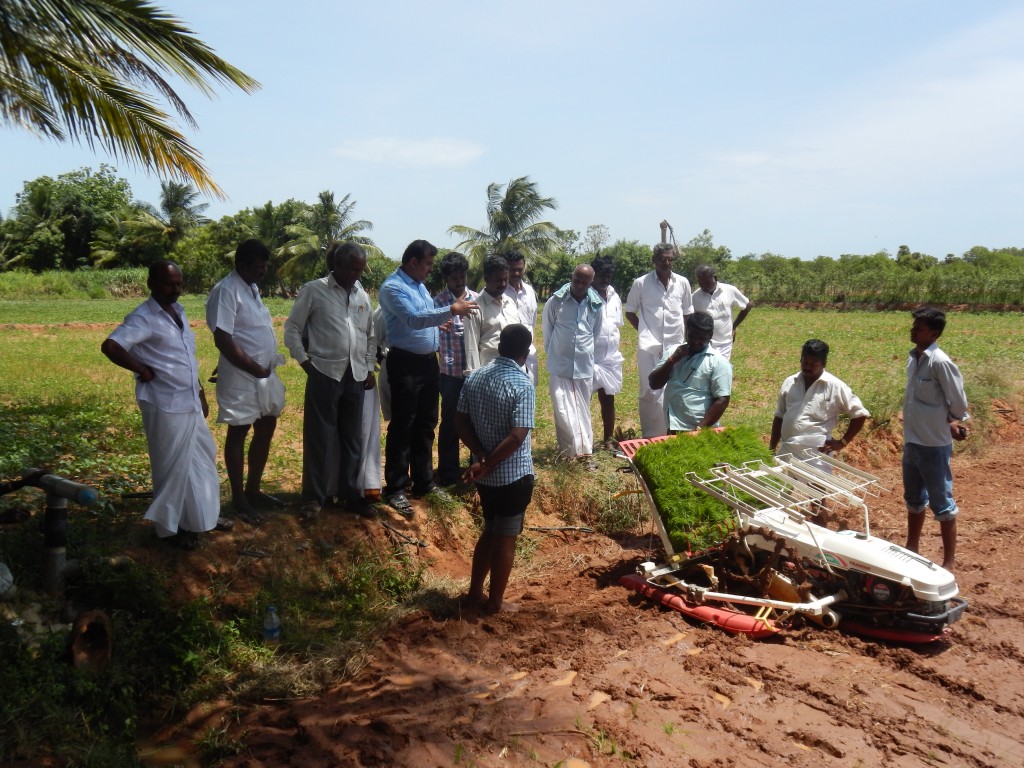 The CSISA Team instructs farmers and service providers in Tamil Nadu on how to use a mechanical transplanter. (Photo by CSISA Tamil Nadu Hub)

Celebration is an apt title for the event,” said Noel Magor, head of the Impact Acceleration Unit and Training at the International Rice research Institute (IRRI), as he glanced at the text written across the tarpaulin that reads CSISA Tamil Nadu Hub Celebration Workshop. “The CSISA project in Tamil Nadu has accomplished a lot in a short time. Our partners’ contribution has been the key significant aspect of thie success of this work in Tamil Nadu.”

Over the past 5 years, the water- and labor-saving technologies under CSISA have reached more than 25,000 farmers and have covered around 2,800 hectares in Thanjavur, Thiruvarur, and Nagapattinam districts of the Cauvery Delta and the neighboring districts of Ramanathapuram and Sivagangai, in the Tamil Nadu State of southern India. These technologies include laser land leveling, improved and mechanized dry direct seeding of rice, mechanical transplanting of rice under both puddled and nonpuddled conditions, rice crop management, alternate wetting and drying, and line sowing using a multicrop seeder under reduced-tillage conditions. These have helped farmers in Tamil Nadu increase their profits.

“Farmers can save about 40% on the cost of labor because renting a farm machine is cheaper than hiring manual labor,” said R. Ganeshamoorthy, CSISA hub manager in Tamil Nadu. “A farmer’s profit from the dry direct-seeded rice is twice as much as that from the regular way of growing rice. By not puddling the field and using shorter-duration crops, farmers can save water by 25–35%. And, depending on the rice variety, farmers can increase their yields by 7–10%.”

Another technology that is improving the efficiency of crop production is laser land leveling. It has already found its way to the hearts of farmers in the Cauvery Delta because of the precision leveling, uniform crop maturity, and water savings of 30–40%, and increased input-use efficiency.

And so has machine-transplanted rice in nonpuddled soil. “Compared with puddled transplanted rice, farmers in Tamil Nadu can save as much as 48% of the labor cost from land preparation, 50% for irrigation, and 67% from the cost of seed and sowing,” said Mr. Ganeshamoorthy. “Through this technology, farmers can save around USD100 or about 20% of the overall production costs.” 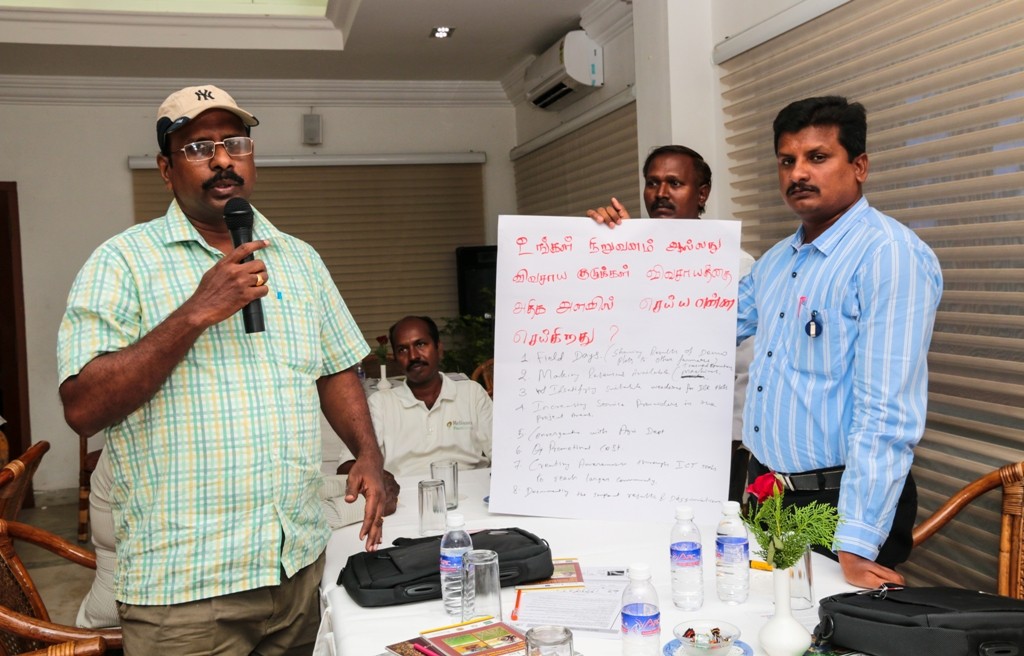 Working together
“Working together with several key organizations is pivotal to the success of the widespread adoption of these technologies in Tamil Nadu,” said Dr. Magor. “In 2013, for example, the use of seed drilling and laser land leveling machines was endorsed by the Tamil Nadu Agricultural University (TNAU) while the Department of Agriculture facilitated and subsidized the purchase of machines for distribution to farmers.”

These partners share CSISA’s goal of increasing the food and income security of resource-poor farm families in South Asia through the development and deployment of new varieties, sustainable management technologies, policies, and partnerships. The project has been promoting durable change across South Asia’s cereal-based cropping systems for several years now. It operates through rural “innovation hubs” in Bangladesh, India, and Nepal, and complements regional and national efforts. 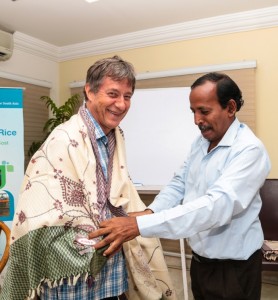 Lasting legacy
“The CSISA research hub is a model success story because our partners carry on the development initiatives even when the project has ended,” explained Dr. Magor. “This is a triumph for the CSISA Tamil Nadu hub.”

Perpetuating these technologies is what TNAU has vowed to do. “TNAU will take up outscaling key technologies under CSISA,” said R. Rajendran, TNAU agronomist, who has been associated with the CSISA project for the last 7 years. “The university will follow through on extending technologies such as improved dry-seeded rice cultivation, nonpuddled machine-rice transplanting, and laser land leveling.

“The technologies have been widely demonstrated in the Cauvery Delta through the CSISA project,” he added. “Also, the research initiatives conducted through CSISA will not stop. The research outcomes will be taken continually to the farmers with support from the Tamil Nadu government and TNAU.”

“Tamil Nadu and IRRI have maintained a long-standing relationship for more than four decades through a number of projects,” said Dr. Rajendran. “The footprints left today by the impact of the CSISA technologies in the Cauvery Delta will live on. Truly, the dry-seeded rice technology and the use of seed drilling have decreased the amount of fertilizer and seeds used by farmers, which eventually reduced their cost of rice production and increased their income.

“With the impact of the CSISA technologies and the continuation of the initiatives, I am optimistic that the relationship between TNAU and IRRI will continue in the next 10 years,” he added.

Aside from the government institutions, NGOs such as MSSRF and the Reliance Foundation will also continue some of CSISA’s activities. MSSRF will maintain the season-long training program for trainers and extension workers. The program was first conducted for select extension staff of the Department of Agriculture of the government of Tamil Nadu from Thiruvarur and NGOs such as MSSRF. The program was a response to a request from the department to CSISA and IRRI, to help and improve the practical capacity of the extension workers in direct seeded rice cultivation and management.

MSSRF has been expanding the season-long training to farmers in other districts in Tamil Nadu and will eventually reach thousands of farmers. Including farmers in the training of trainers’ program is the most logical thing to do because several studies indicate that 20% of the information to farmers comes from fellow farmers compared with other channels such as newspapers, extension workers, radio, and television.

“The diffusion of the CSISA technologies through the farmers will be easier because the farmers are basically happy with yield following the improved management practices involving dry direct-seeded rice,” said Sudhakar, an MSSRF scientist. The technology gives farmers an average of 6.4 tons per hectare. To put this yield into perspective, the land in the districts of Sivagangai and Gautauram is mostly arid. But these parched lands are now producing bountiful harvests.

But yield is only half of the story. The other important half is the profit that farmers gain from direct-seeded rice. They are saving water and reducing labor costs through CSISA’s conservation technologies.

India, dubbed one of the silent tigers in Asia, has blossomed economically. With high-rise buildings sprouting like mushrooms in Bombay, New Delhi, and even in the once humdrum city of Hyderabad, it is easy to understand why farm laborers migrate to these cities, which has created a labor shortage in rural areas. The seed drill and laser land leveling, which are part of the technology package of direct-seeded rice, are mitigating this labor-shortage in Tamil Nadu.

Another partner that has been sharing CSISA technologies is Reliance Foundation with its Rural Transformation Program, which is now turning once unproductive parched lands into lush rice fields. Poornima Shankar, India-based knowledge management and outreach specialist at IRRI, witnessed the transformation of the landscapes in Sivagangai and Ramanathapuram.

“The project is proud to reach more than 25,000 farmers,” she said. “More good news is that this number is expected to double or even triple now that both government and nongovernment organizations will continue what CSISA has started in both research and extension activities.”

“The critical value of building partnerships with key institutions and individuals is seldom highlighted in final reports to donors,” said Dr. Magor. “These partnerships have been established over time with reputation, trust, and credibility as capital. The links to these organizations have become solid enough that it is easy for an IRRI scientist to communicate with key leaderships in Tamil Nadu without the hassle of formalities.”

Truly, with partnership as the linchpin of this hub research, the technology spread to farmers will be more effective and efficient. Partnership and active engagement are essential in IRRI’s work.

Ms. Reyes is the managing editor of  Rice Today.