Partnerships between international research organizations and national agricultural research and extension systems (NARES) are crucial in the development and successful adoption of agricultural innovations. In this blog post, the author recounts her humbling experience as she reflects on the hospitality of a NARES partner, which was indicative of strong stakeholder engagement—a key ingredient in promoting collective action and getting things on the ground.

As I write this, I can slowly feel the burnout caused by the pre-event and event proper workload of our project’s recent major activities creeping in. Reporting back to the office to do my post-event tasks and go back to the daily grind seemed overwhelming.

My past jobs also involved event management, and post-event assessments were usually done formally and immediately after the closing session. The project I am currently part of is relatively small, and feedback is given informally (usually it’s just between me and my boss) so I normally do a self-reflection—just a simple analysis of what went right, what went wrong, and how to do things better next time.

As I was reflecting, I read an email from Dr. Bob Zeigler, our director general at the International Rice Research Institute (IRRI), on how visitors are often impressed with the Institute’s smooth implementation of events. He was pertaining to how IRRI was able to pull off some major events again during that week, particularly, the visit of the ASEAN Ministers of Agriculture and Forestry and of a delegation from India to IRRI headquarters. He noted: “It’s always so impressive how IRRI manages to pull these things off so well and seemingly with so little effort. But we all know that an enormous effort goes into these kinds of events at all levels.”

However, organizing events outside IRRI HQ—in another country —has its own challenges, even though there are country offices (COs) to assist in coordination.

The IRRI-Japan Collaborative Research Project (IJCRP) has organized events held in Laos and Indonesia during the past three years and staff from IRRI COs have been instrumental in the planning and implementation of these events. The first in-country meeting of the new IJCRP, titled Climate Change Adaptation through Development of a Decision-Support tool to guide Rainfed Rice production (CCADS-RR) was jointly organized with staff of its major stakeholder, the Indonesian Center for Rice Research (ICRR) at Sukamandi, where the meeting was held alongside the Dryland Rice Network meeting.

There are many event requirements that should be planned and coordinated and I won’t elaborate on the meeting venue and AV facilities of ICRR, which I find exemplary and common for institutions under the Indonesian Agency for Agricultural Research and Development (IAARD), and almost of the same caliber as those of the Indonesian Center for Food Crops Research and Development (ICFORD) where we held another event two years ago. What struck me most was the accommodation we received.

During the planning stage, Dr. Indrastuti Apri Rumanti, one of ICRR’s seasoned breeders and also lead event organizer, was hesitant to let us stay at the ICRR dormitory. However, a major consideration was the proximity of the dormitory to the meeting venue, which is also inside the ICRR compound (about 7 minutes by car and 15 minutes by foot from the dormitory). The nearest hotel is about 30 minutes (depending on traffic) from ICRR. We decided then that it was more practical to reserve our accommodations at the ICRR dormitory. 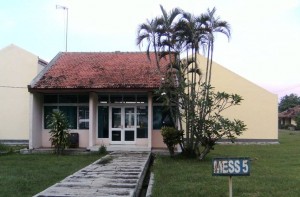 The dormitory at the ICRR, a 5-star accommodation in terms of hospitality!

Of course, I did not expect what seemed like a five-star accommodation, but I felt what VIPs must feel when they visit IRRI from the moment we arrived until we left. We heard that there was a directive from Dr. Ali Jamil, ICRR director, to ensure that we were given the best accommodation possible.

We were welcomed by Dr. Indras and some ICRR staff. Our rooms, though lacking the usual amenities of a hotel (e.g., hot water, cable, and wi-fi), were well-prepared. Our individual names were even posted on the doors. There was 24-hour coffee service located at the dormitory lobby. Meals were served on time and we ate as the locals did—feasting on hot and spicy dishes. Our rooms were cleaned and fresh towels supplied everyday.

I found serenity hearing the first prayer of the day from a nearby mosque at four in the morning and by watching the birds perched on mangrove in the middle of a manmade pond (similar to that at IRRI’s rotunda) just outside the dormitory. Shuttle service to the meeting venue was provided at 7:15 a.m. daily. 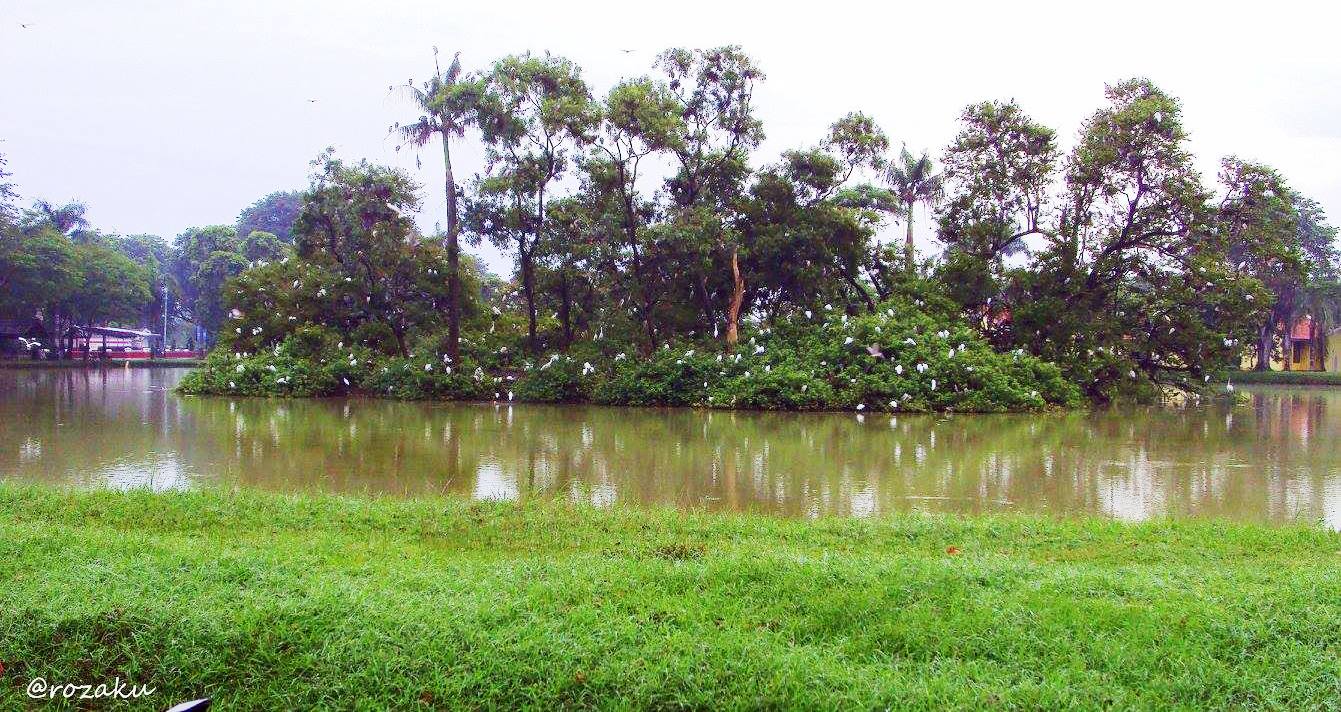 My view from the ICRR dorm—a serene pond. (Photo: Rozakurniati)

We were unable to take breakfast on our last day as we had to leave early, but we were given fresh homemade donuts (tasted better than Indonesia’s popular donut brand!) to enjoy on the way as we headed to our next destination.

In the bigger scheme of things, the absence of standard hotel amenities is insignificant compared with the hospitality accorded to us by ICRR.

There are still many things to be done toward adoption by farmers of CCADS-RR’s major output, WeRise. WeRise is a seasonal climate prediction app that aims to help farmers make decisions that will maximize rainfed rice production through efficient natural resource management. As with any technology, good engagement of stakeholders will be crucial in promoting collective action and moving things forward.

Feeling burned out after organizing events is normal, but what’s important is getting back on track. For me, this entails reflection—asking myself why I do the things I do, what keeps me motivated. The hospitality of the ICRR was indicative of its strong support and, I’d like to think, was also a result of our efforts on engaging them, particularly at the onset of CCADS-RR’s project implementation. The thought is motivating enough. But the opportunity to work with stakeholders who aim to ensure that research outputs reach the ground and achieve impact by improving farmers’ lives gives me the real sense of fulfilment.

Ms. Bugayong works as an Administrative Coordinator in the IRRI-Japan Collaborative Research Project. She is taking up Master in Development Management and Governance at the College of Public Affairs and Development at UP Los Baños.