A new study discovered rare traditional rice varieties with the genetic basis for increased catechin and total flavonoid content leading to heightened antioxidant activity in the whole grain and exhibiting anti-cancer properties. In addition, the genetic variations were also linked to low glycemic index, which is ideal for rice consumers with diabetes.

Cancer is a leading cause of death worldwide. Risk factors such as the causative genes and environment are beyond human control but these account for less than 30% of a person’s lifetime risk of contracting cancer. However, more than 70% of cancer-risk factors, including diet, can be modified to mitigate the occurrence of the disease.

Although no diet has proved to cure cancer, numerous studies suggest that a diet rich in fruits, vegetables, healthy fats, lean protein, and whole grains may help prevent cancer. According to Cancer Research UK, a balanced and healthy diet could prevent around 1 in 20 cancers.

Whole grains for the prevention of cancer
Several epidemiological studies indicate that whole grains such as wheat, corn, oats, and brown rice, which contain the endosperm, germ, and bran, protect against gastrointestinal, breast, and prostate cancers, most likely due to the presence of dietary fiber, resistant starch, oligosaccharides, and fermentable carbohydrates.

Consumption of whole grains may benefit the body in several ways, as described in the article from the Journal of the American College of Nutrition Mechanisms for the impact of whole-grain foods on cancer risk:

An antioxidant of interest
Catechins include catechin, epicatechin, epigallocatechin, epicatechin gallate, and epigallocatechin gallate and belong to the flavonoid family of plant secondary metabolites. Catechins have received wide attention for their potential health uses. There is clinical evidence that catechins have beneficial properties such as reducing the production of free radicals in the body, inhibiting UVB-induced skin damage, and promoting healthy cell activity.

Other studies suggest that catechins act as an antimicrobial, antiviral, anti-allergenic, and anti-inflammatory agents and protect against cancer and cardiovascular diseases.

Rice as a source of catechins
Catechins are the major components of green tea but they are present in many other plant foods such as black grapes, strawberries, apples, blueberries, apricots, legumes, and nuts. Soon, however, rice can be added to that list of foods with strong anti-cancer properties.

A team of researchers, headed by Nese Sreenivasulu from the International Rice Research Institute (IRRI) in collaboration with Dr. Alisdair Fernie and Dr. Yariv Brotman from the Max Planck Institute of Molecular Plant Physiology, and Dr. Glenn Oyong from De La Salle University looked into the identification of traditional rice varieties harboring the genetic basis of natural variation in secondary metabolites and their vital role in human nutrition.

Although the importance of brown rice as a nutritionally dense food staple has long been established, the study now provides genetic links to the production of plant metabolites important to human health. 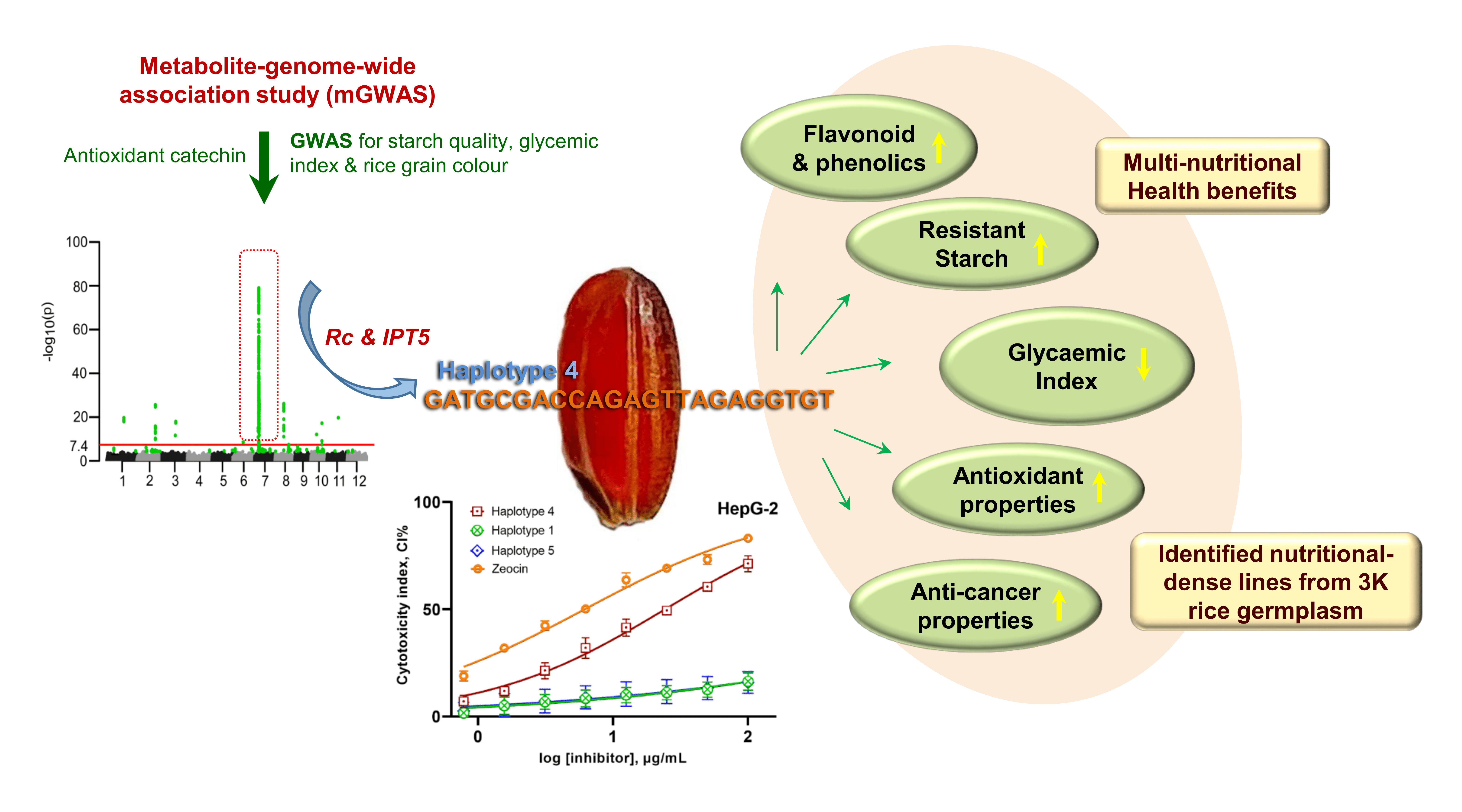 .
“We deployed the untargeted metabolomics approach to mine the genebank lines having potential human health benefits through multi-nutritional properties such as enriched catechin,” said Dr. Sreenivasulu, Research leader of the Consumer-driven Grain Quality and Nutrition Research Unit at IRRI.

“The superior haplotypes for these genes are absent in the modern breeding lines, thus offering the scope for specialized product development initiative to promote human health benefits,” he added. “These successful examples raise the possibility to increase the nutritional content within the staple diet by promoting whole grain consumption.”

Bridging upstream discovery with downstream application
With these game-changing findings in hand, rice breeders, in the future, can look to harness and expand the effort to make the important staple food contribute to the safe and healthy diets of billions of rice consumers worldwide.

“Bridging cutting-edge upstream discovery science like metabolomics and computational analytics to the downstream application of generating nutritionally dense and medically-relevant rice lines, and their critical evaluation and interpretation for the benefit of humankind, is the new paradigm operational at IRRI,” Dr. Kohli said.