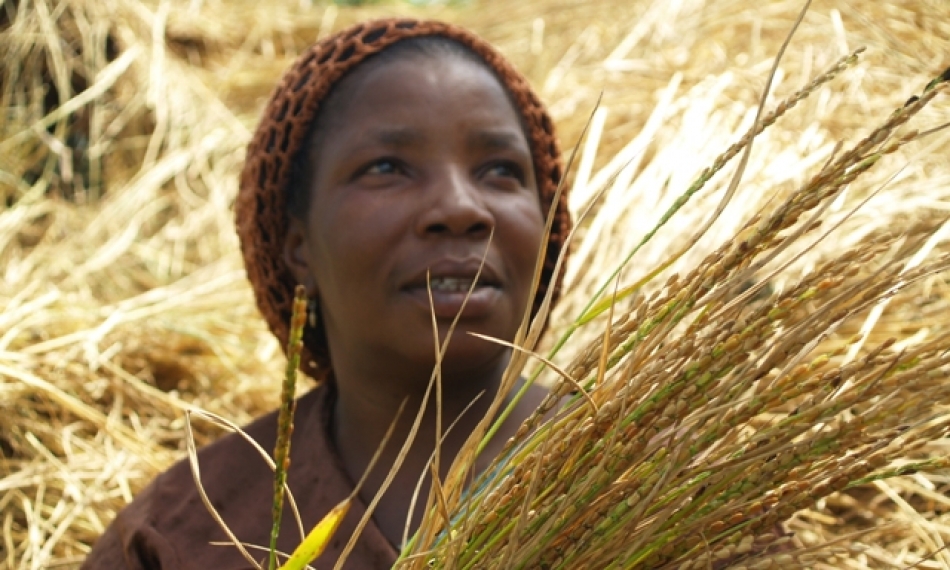 Three thousand years ago, African rice (Oryza glaberrima) was first domesticated in central Niger in West Africa and then spread to the rest of the continent. For thousands of years, it sustained the economies of many precolonial African kingdoms in West and Central Africa. But, African rice has been overshadowed by its Asian relative, particularly since the early 20th century.

Old rice in a new world
African rice was initially ignored by mainstream research, said Dr. Koichi Futakuchi, ecophysiologist at the Africa Rice Center (AfricaRice). Historically, researchers were interested only in passing on beneficial traits, such as resistance to pests and diseases, from African rice to Asian rice. Recently, however, the world has “rediscovered” African rice and more researchers are working on improving African rice by introducing genes from Asian rice.

Although it is prone to lodging, has lower yields, is harder to mill, and has panicles that scatter the seed at maturity, African rice is known for its toughness.

African rice was crossed with Asian rice in the 1990s to create NERICA (NEw RICe for Africa) varieties that can have both O. glaberrima’s adaptability to indigenous environments and O. sativa’s high yield potential. NERICA proved to be widely successful. Several upland NERICA varieties are already available as well as lowland ones that are adapted for both rainfed and irrigated lowlands.

NERICA, however, does not signal the end of pure African rice. New findings presented by AfricaRice scientists and their partners during the 2010 Africa Rice Congress sparked renewed interest in O. glaberrima (see Pockets of Gold). Scientists at AfricaRice believe that improved, high-yielding O. glaberrima varieties, armed against Africa’s multiple abiotic and biotic stresses, have tremendous potential and can play a vital role in the region’s food security.

Divine offering
African rice is also important in the spiritual realm of some African people. In fact, its value in sacred rituals saved African rice from the onslaught of Asian rice in pockets of small communities, such as the Jola (or Diola) people in southern Senegal, according to Olga Linares, staff scientist emeritus at the Smithsonian Tropical Research Institute in Panama. The Jola engage in largescale rice cultivation and agrarian activities, and measure a person’s wealth by the amount of rice owned.

Those who have not converted to Islam continue to practice awasena, their traditional religion, and worship the supreme deity Emitai, Dr. Linares noted in her book Africa rice: history and future potential. The Jola believe that Emitai, the creator of all life and the bringer of rain that sustains them, gave O. glaberrima (also called Diola rice) to their ancestors. As such, it possessed a life-giving power that explained the origins of the land. To preserve the link to their ancestors and to the rain god, the Jola make sure that varieties of O. glaberrima are always planted.

Oryza sativa displaced many traditional African rice varieties at the turn of the century. However, one variety, the salinity-tolerant Ejonkin, remains popular among the Jola who inhabit marshy terrains, according to Dr. Linares. Although it is perfectly suited in areas where daily tidal flow occurs and continuously floods the area with brackish water, Ejonkin is mainly cultivated to gain the favor of the rain-shrine called Husurah, she noted. Only African rice is considered a suitable offering in exchange for abundant rains. Ejonkin is so important to this ritual that communities that no longer cultivate African rice varieties would trade 10 jugs filled with palm wine for a jug of Ejonkin, Dr. Linares added.

Rice and the supernatural
Heirloom cultivars have been used in ceremonies all over the world to appease the spirits. The link between crops and ancestors is a fundamental pillar of most agrarian societies, said Dr. Linares. She cited the Mende people, an ethnic group of mostly farmers, in Sierra Leone where African rice is a major part of their ritual sacrifices to their ancestors. The Mende believe that their ancestors and Ngewo, creator and ruler of the universe, gave their community protection and fertility.

In 1981, a PhD dissertation reported that some members of the Susu tribe of Sierra Leone, Senegal, and Mali practice folk Islam, a combination of the Islamic faith and their traditional animistic beliefs in ghosts, spirits, and other gods.They fear witches who have the power to cause harm through black magic.

To protect their rice fields against witchcraft, the Susu rice and millet farmers use Saali forê, an African rice variety from French Guinea (now Guinea-Conakry).

African rice in South America
The spiritual ties that bind Africans to their rice have endured distance and even the shackles of slavery.

Oryza glaberrima reached South America via the slave trade ships carrying Africans from rice-growing regions such as Sierra Leone, Liberia, Côte d’Ivoire, and Ghana. The Africans were brought to Dutch Guyana (now Suriname) to work on plantations in the late 17th and early 18th centuries.
Preferring to live under the unforgiving conditions of the Amazonian wilderness as free people, some slaves escaped and banded together in forest and mountain settlements, forming a resistance movement until they built autonomous communities. They became known as Maroons.

Maroons preserved much of their African cultural heritage, including their rice, according to Tinde van Andel, a postdoctoral researcher studying medicinal and magic plants of Suriname, Ghana, Benin, and Gabon at Leiden University in the Netherlands. Mercenaries hired to recapture slaves reported extensive rice fields in cleared swamps surrounding temporary rebel camps.

Forest rice
Maroons claim that their rice originally came from Africa, through seeds smuggled into the settlements by a female ancestor who hid them in her hair. However, one legend documented by Dr. van Andel in African Rice (Oryza glaberrima Steud.)African Rice (Oryza glaberrima Steud.): Lost Crop of the Enslaved Africans Discovered in Suriname narrated how a hunter accidentally came upon the garden of an extraordinarily powerful apuku (forest spirit).

Some Maroons believe that all present-day African rice in Suriname originated from the seeds that their ancestors had collected from that mysterious rice swamp made neither by Maroons nor human beings. The belief that the rice field was made by a spirit of the deep woods may have led to the name mátu alísi (forest rice) and Maroons living in Suriname (Saramaccans) claim the crop was growing wild before they started to cultivate it, Dr. van Andel noted.

Maroons deem African rice valuable in their rituals as they offer it along with other food items to the Earth Mother in a ritual called nyannyan mofu nayan, according to Dr. van Andel. The offering is known as ala mofo nyan (food for all mouths, meaning an offering for all ancestors or gods). Appeasement of ancestors is among the most important ceremonies of the Saramaccans.

“How this mysterious rice swamp ever came to be, which rice was growing there, and whether it was related to the legend of the woman who hid the rice in her hair, we will probably never know,” Dr. van Andel said. “However, the importance of Maroon oral history and ritual practices in the conservation of the different rice cultivars is evident.”