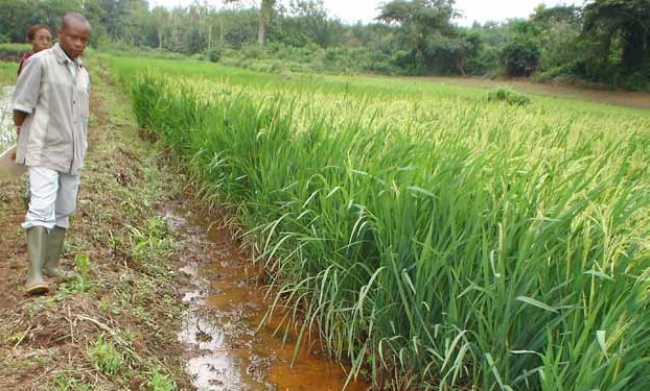 A bronzed look may be attractive for human beings but, for rice plants, it could be fatal. Rice leaves turn bronze when the plants are affected by iron toxicity—a widespread nutrient disorder in lowland (wetland) rice.

Iron is a trace element that is essential for rice plants for normal growth and development, especially for photosynthesis and maintenance of chlorophyll. However, at high concentrations, it becomes toxic to the plants.

Rice yield loss due to iron toxicity ranges from 10% to 100%, depending on the severity of the toxicity and the tolerance of rice varieties. The loss is greater when toxicity is accompanied by nutrient deficiencies.

The stress is significant in areas where reddish soils are predominant. These soils have low fertility but are rich in iron, which, however, is in the ferric (nonsoluble)form and is therefore not accessible to rice plants.

Under prolonged flooded conditions without drainage, the ferric iron  into ferrous (soluble) iron and becomes available for uptake by rice plants. The soluble iron is then absorbed by the roots of the rice plants and accumulates in the shoots.

Lowlands are often affected by iron toxicity. It is particularly common in acid soils, especially those with a very low pH (less than 5.0), as acidity increases the availability of ferrous iron to the plants.

In sub-Saharan Africa (SSA), where lowland riceecologies represent about 53% of the total rice area in the region, iron toxicity is a serious problem for smallholder rice farmers.

The first signs of iron toxicity in the rice plant are bronze spots, beginning at the tip and spreading toward the base of the rice leaves. Other effects include stunted plant growth, decreased tillering, and high spikelet sterility (leading to reduced yield).

Iron also damages the root structure of the rice plant and reduces its capacity to absorb soil nutrients. For example, when the ferrous iron concentration in the root zone is high, iron plaques are formed, which prevent the plant from taking up other nutrients. Iron toxicity is generally associated with a deficiency of phosphorus, potassium, and zinc.

However, most of these methods are impractical or unaffordable for resource-poor rice farmers in SSA. The use of varieties tolerant of iron toxicity offers the most practical and economical solution to the problem.

Research by the Africa Rice Center (AfricaRice) has shown that genetic tolerance of iron toxicity can contribute significantly to rice production in toxic soils; hence, the Center and its partners are now focusing their efforts on improving rice’s ability to withstand or even survive the poison.

They have evaluated rice varieties, selected promising lines, and developed agronomic practices that can help farmers cope with iron toxicity. Rice varieties with moderate tolerance, such as WITAs 1, 3, 4, and 12, have been released for cultivation in lowlands.

Iron toxicity symptoms (bronzing) on the leaves during a field trial, Edozighi, Nigeria.

Traditional varieties that have been grown and selected by farmers for many years tend to be relatively iron-tolerant, such as CG14, which was one of the parents of the first group of NERICA varieties developed by AfricaRice. CG14 is a variety that belongs to the indigenous African rice species, Oryza glaberrima. Researchers have been trying to transfer tolerance from these known donors into high-yielding but iron-sensitive varieties.

According to Dr. Khady Nani Dramé, AfricaRice molecular biologist, the current focus of research at the Center is on the genetics of tolerance of iron toxicity and also on the transfer of genes and molecular markers (QTLs) for iron toxicity tolerance into widely grown local varieties or “mega-varieties” using molecular marker techniques. She is closely involved in the project Stress-Tolerant Rice for Poor Farmers in Africa and South Asia (STRASA).

The STRASA project, which is funded by the Bill & Melinda Gates Foundation through the International Rice Research Institute (IRRI), aims to accelerate the development and delivery of improved rice varieties that are tolerant of five major stresses: drought, submergence, salinity, iron toxicity, and low temperature.

As the lack of a standardized, controlled, and reliable suitable screening technique has been a major hindrance to breeding rice tolerant of iron toxicity,Dr. Dramé and her colleagues have been testing several screening methods, including fields in hot spots, pots on station, and a hydroponic (soil-free) environment.

Marker-assisted selection (MAS) will be used to introduce the genes that confer tolerance to iron toxicity in rice to popular varieties in the region in partnership with national programs. A few molecular markers (QTLs) associated with tolerance of iron toxicity have already been validated by the research team. As part of the project, an inventory comprising about 180 tolerant varieties has been made from rice breeding programs of AfricaRice, IRRI, the International Center for Tropical Agriculture, and national programs.

In the first year, farmers examined 80 varieties (including a local check), from which they selected the varieties
they preferred. Ten varieties were retained per country for further testing.

In the second year of PVS, farmers grew these varieties with their local varieties and made further selections.

Currently, the three best varieties tolerant of iron toxicity per participating country (except for Ghana) have been retained and are expected to be nominated for national release.

The analysis of the PVS trials indicates that the new varieties performed quite well in farmers’ fields compared with the local varieties. “We are happy that, at the end of the PVS trials, we can offer to resource-poor farmers in SSA promising rice varieties that can thrive in iron-rich soils,” said Dr. Dramé.