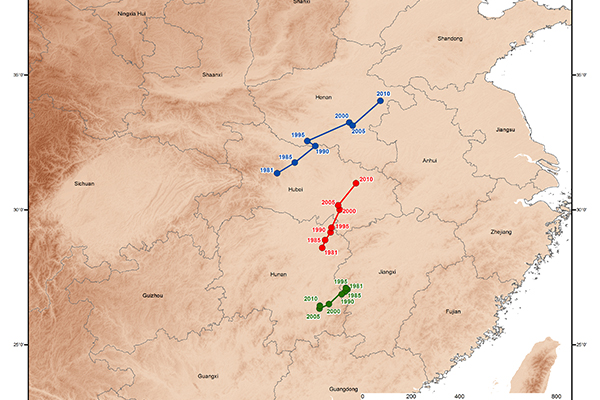 Shifts in the center of rice area in China from 1981 to 2010 for annual (red), single-cropped (blue), and double-cropped rice (green).

Understanding and visualizing trends in rice-producing countries is a major task of the Geographic Information Systems (GIS) laboratory at the International Rice Research Institute (IRRI). Inspired by a demographic concept of “center of population” as used by the United States Census Bureau, among others, we trace the shifts in the center of a country’s rice area over time and try to understand the reasons for the shifts (climatic, political, or market-driven), as well as possible future shifts and their implications. We illustrate with provincial data for single- and double-cropped rice in China (1981-2010) and state data for kharif- and rabi-season rice from India (1962-2010).

In China, the center of annual rice area has shifted northward by some 300 kilometers from Hunan to Hubei Province over 30 years. Overall, the area has decreased slightly.But this hides two distinct and opposite trends.

The center of one-crop-per-year rice area has shifted northeast by more than 450 kilometers into northeastern Henan Province and, over time, the area has increased substantially. One reason for this is increasing demand for japonica rice (as Chinese consumers become wealthier). Moreover, new japonica rice areas have opened up in the far northeastern provinces, and temperatures have become warmer.

The area planted with two crops per year has moved in the opposite direction by about 120 kilometers into Hunan Province and has shrunk dramatically because of labor shortages. Rice farming has been abandoned or has shifted from two crops to one crop per year in provinces such as Zhejiang, Anhui, and Jiangsu. Double cropping is declining everywhere in China, but it is increasingly concentrated in Hunan, Jiangxi, Guangxi, and Guangdong, which now accounts for 83% of double-cropped area (compared with 61% in 1979).

In India, the area for both wet and dry seasons is increasing. The wet-season crop (kharif) has moved to the northwest by some 180 kilometers over 50 years and has increased slightly. Although area in the far south (Tamil Nadu and Kerala) is declining, large areas in the northern states of Punjab, Haryana, and Uttar Pradesh are expanding. Some of this is due to increased irrigation investment in the north, and may also be due to warmer temperatures pushing the rice area slowly northward. The smaller rabi-season crop has grown massively because of irrigation expansion (especially groundwater irrigation in West Bengal) and has raced in a northeasterly direction by around 530 kilometers from Andhra Pradesh into Odisha.

The trends in China are likely to continue as the underlying drivers of economic growth and perhaps climate change continue. In India, the trends may change because of water shortages in the north and increased investment in eastern India.

These maps show that rice farmers are very dynamic and they readily adapt to changing technological, economic, and climatic factors.

Mr. Johnson is geographer at the University of Bristol.

Dr. Dawe is senior economist at the Food and Agriculture Organization in Bangkok, Thailand.