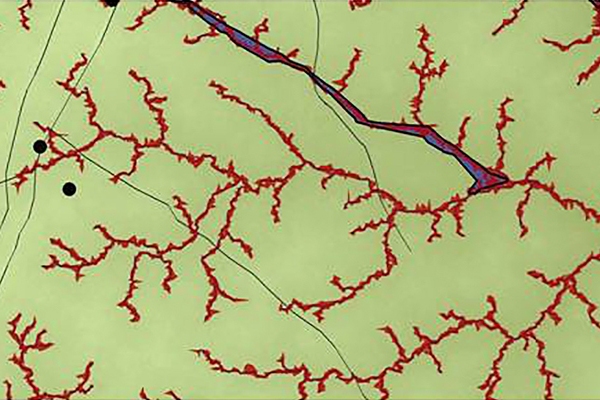 Inland valleys—common landscapes in Africa—can play a vital role in future food security because they are more fertile than the surrounding uplands. Moreover, water is more available for a longer time. In many regions, two to three crops are harvested per year, while in the uplands only one crop can be cultivated. In rainy seasons, rice is the only major crop that can be grown in wet and temporarily flooded conditions. On the valley fringes, cash crops such as maize, cotton, cashew, mango, and banana are common.

THE CALCULATED inland valleys (IVs) were validated using a database of digitized sections of inland valleys obtained from the German IMPETUS project. Subcatchments were prepared to compare the sections of IVs with the calculated IVs. Then, statistics on the omission and commission errors, accuracy, and the total area within the catchment were derived.

A digital elevation model (DEM) provides a value for the altitude for each pixel. Two types have global coverage and are available for free to the research community. The Shuttle Radar Topography Mission (SRTM) DEM, which was developed by NASA, has a spatial resolution of 90×90 meters. The Aster (Advanced Spaceborne Thermal Emission and Reflection Radiometer) DEM is more precise in spatial resolution (30×30 meters), although its accuracy is lower than SRTM.

Starting with Benin, a small West African country, a model was developed to first assess the stream network based on digital elevation models. Then, virtual transects were created for each section of the stream to provide the altitudes of the stream, the lowest part, and the surrounding pixels of the valley. The inland valley was then determined by using three thresholds1 representing the maximum elevation difference between the bottom and the pixelsthat are attributed to the inland valley. This was then validated using a dataset of more than 300 digitized inland valleys in Benin from the IMPETUS project, a joint venture of the universities of Cologne and Bonn in Germany.

AN INLAND valley with maize on the valley fringes (foreground), rice fields in the valley bottom (middle) and tree amidst natural vegetation on the other fringe (background).

Findings show that the derived inland valleys have more than 45% accuracy for both Aster and SRTM DEMs. The closest estimation in terms of total area, an overestimation of 9%, is obtained with the Aster DEM and a threshold of 1 meter. Thus, the total inland valley area in Benin was estimated to be 12,000 km2, which is about 10% of Benin’s land surface. This study in Benin is the first of its kind. In the future, similar studies will be made for Sierra Leone, Liberia, Mali, Nigeria, Burkina Faso, and Togo. By 2016, validated inland valley maps and derived national and subnational statistics for all of West Africa will be available through web mapping services.

The authors acknowledge financial support from the European Commission through the RAP-IV project and from the Ministry of Agriculture, Forestry, and Fisheries of Japan through the SMARTIV project.

Dr. Zwart is a researcher in the Remote Sensing and GIS unit at Africa Rice Center in Benin. Ms. Steinbach is a graduate student in the University of Cologne’s Department of Geography.