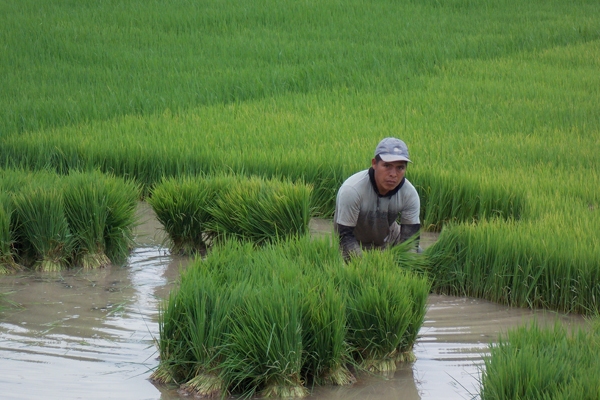 They’re not the biggest rice producers in Latin America and the Caribbean (LAC). But, like the seven samurai of the famous 1954 adventure film, they’re certainly among the boldest, and they fight hard to improve the lot of rice-growing communities.

These seven countries are Bolivia, Costa Rica, Ecuador, Nicaragua, Panama, Peru, and Venezuela. Their national programs are currently engaged with the impact evaluation team at the Colombia-based International Center for Tropical Agriculture (CIAT) in a study on the adoption of improved rice varieties, CIAT’s role in their development, and their impacts on rice productivity.

CIAT’s collaboration with these seven programs has become especially strong over the years. Their experience and achievements illustrate particularly well how strengthening national capacity has accelerated the development of improved varieties.

Today, the LAC region is producing around 27 million tons of paddy rice with an average yield of 4.8 tons per hectare, compared to only about 12 million tons of rice in 1970, with an average yield of 1.8 tons per hectare. This impressive growth is the result of the adoption of improved modern varieties as well as better agronomic management. In 1971, CICA 4—an elite line developed by CIAT and distributed through the International Rice Testing Program—was released in Colombia. One decisive factor has been the steady improvement in national rice research capacity. Before 1990, the seven countries together were releasing just 1.2 varieties per year, on average, or 0.2 varieties per country. Then, in the 1990s, the number rose to 4.6 varieties per year (0.7 varieties per country) and to 6.8 varieties annually after 2000 (essentially one variety per country). Of the 186 rice varieties released by the “seven samurai” countries, 63% were developed using germplasm from CIAT.

Throughout the 1990s, CIAT’s involvement in variety development consisted mainly of transferring advanced lines and a few segregating populations generated at Center headquarters to national breeding programs. These materials were then evaluated under diverse production conditions, and the selected lines were released as improved varieties.

But, over the last decade, many national rice programs have begun making their own crosses, using parents from CIAT and other sources, especially the International Rice Research Institute (IRRI). Since 2000, 66% of the varieties released in the seven countries have resulted from crosses made by national rice programs. Thus, CIAT’s contribution to rice variety development in these countries has increased to 75% of the varieties released, even as the transfer of advanced lines from Center headquarters has declined.

Despite the proliferation of modern rice varieties across the region, some countries still show significant gaps in the adoption of these varieties. The seven countries covered by the CIAT-led study reported that about 60% of the total rice area is sown to varieties released after 2000. The age of these varieties averages 8.4 years. But, these averages disguise large variability across countries. Although 93.4% of Panama’s rice area is planted to varieties released in the last decade, the figure is only 15.1% for Nicaragua. Similarly, although in Venezuela the average age of rice varieties currently grown is just 5.7 years, in Bolivia it is around 11.5 years.

“In the case of Venezuela, the dynamism mainly results from good breeding programs in both the public and private sector,” said Eduardo Graterol, executive director of the Latin American Fund for Irrigated Rice (FLAR, its acronym in Spanish). “The country’s strong certified seed system also contributes importantly, supplying seed for more than 80% of the total rice area.”

The growing strength of national rice breeding programs and their continuous investment in genetic improvement have helped farmers achieve sustained yield increases across the region. Harvests in southern Brazil, Peru, and Uruguay now average more than 7 tons per hectare.

“In Peru, the decisive factors are the productive potential of new varieties, their tolerance of stress, good grain quality, and a short growing period as well as the innovative character of our growers,” said Orlando Palacios, who leads rice research in the country’s National Institute of Agricultural Research (INIA).

CIAT’s work on genetic improvement has contributed significantly to the gains. In six of the seven countries participating in the ongoing adoption study, the average yields of the improved varieties to which CIAT contributed are 13% higher than for other improved varieties. Peru is the single exception because of its high-yielding variety IR43, which was developed by IRRI, selected at CIAT, and introduced by the Peruvian national program for the country’s northern coast, a major rice-producing area.

These results show the substantial payoff from international rice genetic improvement for LAC and the value of CIAT’s leadership in this work. And, the study highlights the success of efforts to strengthen the capacity of national rice programs, while calling attention to the need for redoubled efforts in certain countries, such as Bolivia and Nicaragua. To maximize the benefits from rice genetic gains, the region must also sharpen its focus on reducing yield gaps through improved crop management.

Continued advances in rice genetic improvement and agronomy are the keys to sustaining the impressive growth in yield and production that has made Latin America not only self-sufficient but also a net exporter of this important cereal.