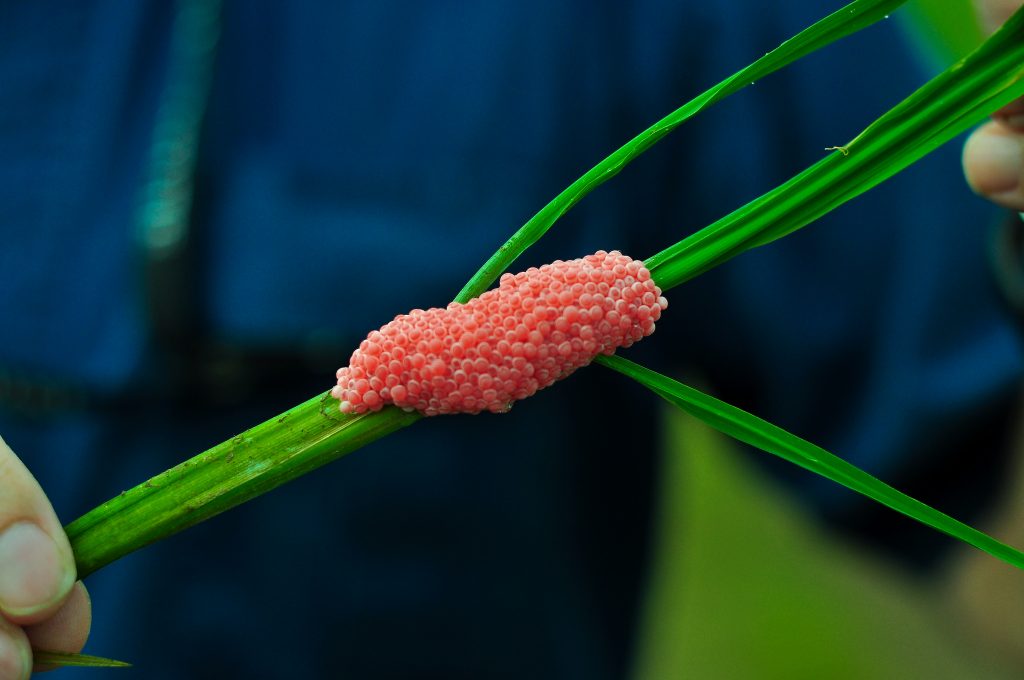 Golden apple snail eggs. Apple snails have been a problem for Asian rice farmers for decades are among the most damaging pests of rice and other aquatic crops. (Photo: IRRI)

Change is threatening rice growing in Europe
In the Mediterranean area, climate change is leading to an increase in temperatures and more frequent and severe periods of drought, which are harming water quality and river flows. These effects are increasing the salinity of the soil, which has a negative impact on crop productivity. Climate change is also causing the sea level to rise and further increasing salinity in the coastal areas, deltas and river mouths where rice is grown. As a result, it is threatening the very existence of the rice sector in the Mediterranean area.

The NEURICE project (New commercial European RICE), coordinated by the University of Barcelona and involving IRTA, CRAG, the Catalan Càmara Arrossera del Montsià cooperative and the IRIS engineering company, as well as other European partners, is aiming to obtain new varieties of salt-tolerant rice. Varieties of European rice will thereby be obtained which are suited to the new conditions, thus enabling rice growing to continue without losing productivity and maintaining the positive environmental, scenic and socio-economic impact of this activity.

The giant apple snail and the Ebro Delta
In Catalonia, the Ebro Delta has been threatened for a number of years by an invasive species which has devastating effects on the rice harvest: the giant apple snail (Pomacea maculata). Its high reproductive capacity and the absence of natural predators means it has been impossible to halt its expansion within the Delta, causing increasing damage to crops.

Flooding fields with seawater has been one of the few strategies which has managed to curb the presence of the giant apple snail, taking advantage of the fact that it does not tolerate high salinity levels. Unfortunately, the residual salinity following the treatment with seawater generates losses in the crops which, in the worst cases, can affect up to 30% of production.

Therefore, in Catalonia, the NEURICE project not only provides a solution for adapting rice varieties to climate change, it will also enable us to combat the invasion of the giant apple snail.

Incorporating the salt tolerance of tropical varieties
In Asia there are some tropical varieties of rice which are highly tolerant to salinity but which cannot be grown in the Mediterranean climate and are not commercially viable. It has recently been discovered that the salinity tolerance of these tropical Asian varieties is due to the presence of a chromosome segment called Saltol. Traditional, non-transgenic improvement techniques will be used to incorporate this feature into the commercial European varieties.

Will salt-tolerant varieties be as good as the current ones?
Studying the performance of the new varieties is one of the tasks of the project. The first tests will be performed on hydroponic crops in greenhouses, an environment that will enable an assessment of the degree of salinity tolerance of the new varieties in a controlled manner, which will be more effective and faster than in the field.

Once the most salt-tolerant varieties have been identified, they will be tested in the rice fields of the deltas of the Ebro (Spain), Po (Italy) and Rhône (France) from 2018 onwards. These varieties will be grown in fields with salinity and without salinity in order to compare agronomic production and performance.

The salinity-tolerant varieties which pass the tests in the fields will be registered and marketed so that the rice producers in these areas can continue to perform their activity under conditions of high salinity.