Sixty farmers participated in evaluating new salinity-tolerant rice varieties in a farmer’s field in Meikhtilar District, Mandalay to identify new high-yielding varieties, select the best varieties for their fields, and become aware of the sustainable adoption of improved varieties in stress-prone environments. 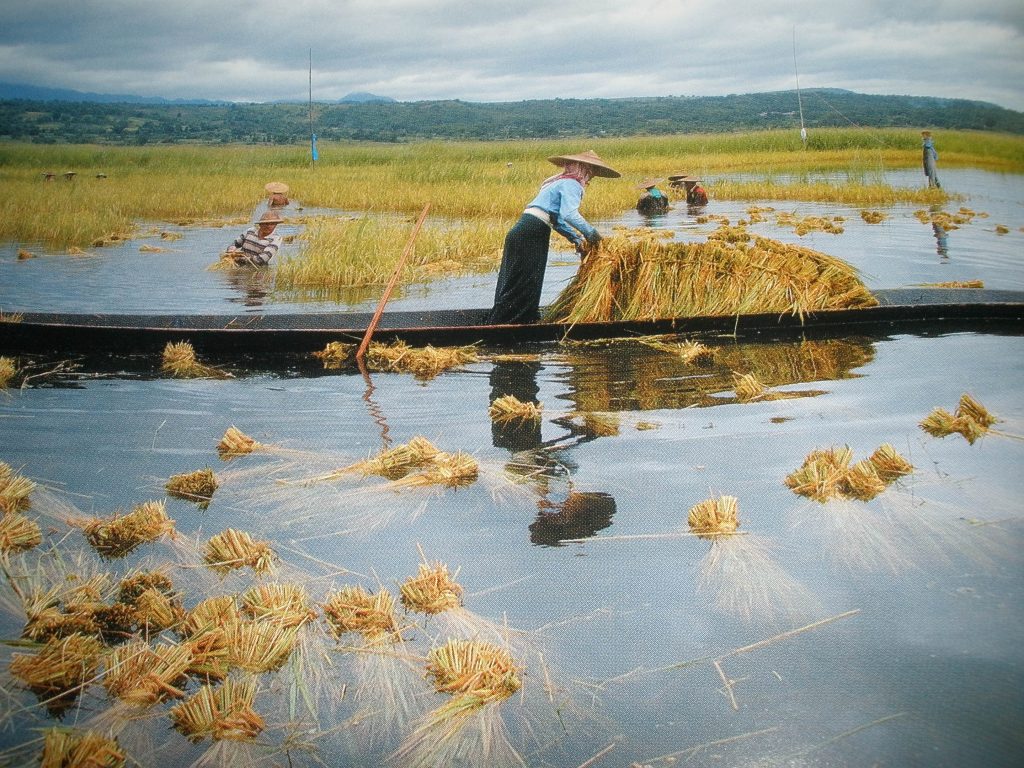 One of the strategies used by CURE to promote cropping systems innovations and farmer-preferred varieties is demonstration activities with the help of local extension agents. (Photo: IRRI)

Myanmar has a predominantly agricultural economy based on rice production, with 32% of the total rice area composed of unfavorable lowland areas. Salinity-affected rice-farming areas account for 2% of these unfavorable areas—almost 110,000 hectares—spread across different states and regions. The largest salinity-affected area is the Ayeyarwaddy Delta (59,818 ha), followed by Rakhine (28,600 ha), Taintharyi (7,573 ha), Yangon (7,346 ha), Mon (5,346 ha), and Mandalay (190 ha).

Since 2011, the International Rice Research Institute (IRRI), through the Consortium for Unfavorable Rice Environments (CURE), has been working with Myanmar’s Department of Agricultural Research (DAR) to develop suitable rice varieties for these challenging areas. Their fruitful collaboration has resulted in successfully developing and distributing to farmers seeds of three salinity-tolerant varieties—Sangnakhan Sin Thwe Latt, Pyi Myanmar Sein, and Shwe Asean.

Still, a team of researchers from IRRI and DAR continues to work hand in hand to identify new salinity-tolerant varieties and enhance rice production in the salinity-affected rice areas of Myanmar.

Farmers choose their preferred varieties
Sixty farmers participated in evaluating new salinity-tolerant rice varieties in a farmer’s field in Meikhtilar District, Mandalay, in December 2015. Of the participants, 43 were males and 17 were females.

The participatory selection of varieties aimed to identify new high-yielding varieties that could adapt to the conditions in Mandalay, and to determine the role gender plays in choosing varieties. The activity was also conducted for the farmers themselves to select the best varieties, and become aware of the sustainable adoption of improved varieties in stress-prone environments.

The two highest-yielding varieties (IR11T 159 and Salinas 15) were more preferred by men than by women because these varieties produced more tillers and more spikelets per panicle, and had good plant height and higher grain yield. On the contrary, women liked IR77674-2B because of its long grains and higher yield.

Elite varieties perform well in different locations
One of the strategies used by CURE to promote cropping systems innovations and farmer-preferred varieties is demonstration activities with the help of local extension agents.

Six identified elite or farmer-preferred varieties were showcased through demonstration trials held in Yezin (with normal soil conditions), Myaung Mya (with salinity-affected soils), and Zalote and Kyaukse (with basic soil conditions) in June 2015. All tested varieties had 37.6–79.2% higher average yields than check variety Pokkali. Among the varieties, IR10 T102 had the highest average yield (5 t/ha), followed by IR10 T105 (4.7 t/ha) and Pyi Myanmar Sein (4.37 t/ha). Furthermore, these varieties not only had a higher yield but also adapted better than the other varieties in all locations.

IR10 T102 had the highest yield on Yezin and Zalote research farms, which had normal and basic soil conditions, respectively, and was 79% superior to Pokkali.

Among the five tested varieties, Pyi Myanmar Sein performed best and produced the highest yield (4.3 t/ ha). The farmer-preferred varieties had little to no yield. Many farmers from the village came to see the field demonstration and, upon seeing the successful results, asked U Chit Hlaing to share Pyi Myanmar Sein seeds for them to plant in the 2016 wet season. The farmers liked the new variety because of its tall height, higher yield, early maturity, and survival even in drought-prone conditions.

Because of the success of the demonstration trials, farmer U Chit Hlaing felt proud of and thankful for the strong partnership between CURE and DAR.

CURE-DAR team plans ahead
The team believes that, by doing a participatory varietal selection and seed multiplication each year, information on new elite varieties will be shared quickly with farmers, and their capacity will be developed. With the progress that they have achieved, the team plans to hold more participatory trials for farmers as well as a varietal improvement program to develop more salt-tolerant rice varieties. The team works tirelessly to develop and distribute new and improved rice varieties that will help Myanmar farmers in salinity-affected areas raise rice yields and quality, even in unfavorable conditions.