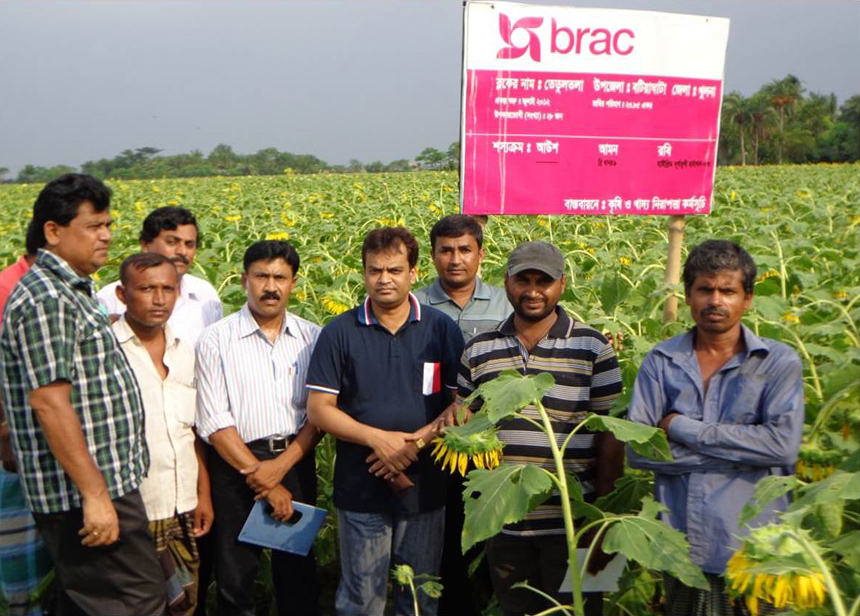 “BRAC has a long history of development work and commitment to food security and reduction of hunger and malnutrition through improved agricultural productivity,” said Sudhir Yadav, co-leader of the SIIL-Polder project that focuses on the coastal area of the country. “This makes the organization a good ally in improving the lives in polder communities in coastal Bangladesh.”

From ruins to hope
When the Bangladesh War of Independence broke out in 1971, many people fled to neighboring India. When they came back after the war, they found that their houses were decimated. With no livelihood, the people were helpless.

But, Sir Fazle Hasan Abed, a man from a wealthy family, had a vision of reaching out to his countrymen. He sold his house in London and he and his like-minded friends raised funds to buy building materials for their homeless countrymen. His work, which he started with his colleagues in a remote region of northeastern Bangladesh, led to the nongovernment organization known today as BRAC.

Although the building materials were intended for the poor, they eventually ended up in the hands of the rich as these were sold for food and other needs. Thus, BRAC (formerly known as the Bangladesh Rehabilitation Assistance Committee and then as the Bangladesh Rural Advancement Committee) saw the need for providing the poor with economic empowerment through livelihood activities. In terms of the scale and diversity of its interventions, BRAC is now the largest development organization in the world.

BRAC counts 45 years of fruitful existence. Dr. Abed never imagined that BRAC would be this big. The impact of the organization is so huge that Dr. Abed received the World Food Prize in 2015. 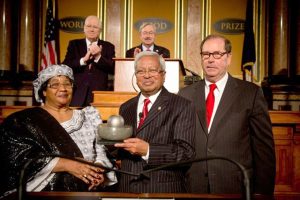 Sustainable giant
Because the country’s economy is agriculture-based, BRAC’s entry point of intervention came through the agricultural sector such as crop-based livelihood, fishery, poultry, and livestock. In each aspect of agriculture, the end goal has always been enterprise development.

“The strategy is to reach sustainability,” said Dr. Md. Sirajul Islam, head of the Agriculture and Food Security Program of BRAC. “Donors may not always be there to finance the organization.”

One example of its viable activities is in the seed industry. “At first, we produced seeds and gave them to the farmers,” said Dr. Islam. “Since this was not sustainable, we ended up marketing the seeds, which eventually helped the seed sector. As one of the largest producers of quality seeds, we control the market to some extent. As a result, private seed producers could not unjustifiably increase the price because we have the biggest share. The revenue earned is fed back to the organization’s development activities.”

BRAC-IRRI connection
Dr. Abed has been a formidable ally of agriculture, particularly the rice sector. He served as a member of the Board of Trustees of the International Rice Research Institute (IRRI) from 2005 to 2010.

Moreover, the connection between IRRI and BRAC does not end there. The late Dr. Mahabub Hossain, former head of IRRI’s Social Sciences Division, retired from the institute in 2007 to serve as the executive director of BRAC. He addressed the challenge of the reemergence of food insecurity in the country and established BRAC’s Agriculture and Food Security Program.

BRAC focuses on three components in attaining food security through agriculture, according to Dr. Islam. The first is research and development.

“Submergence-tolerant rice varieties such as BRRI dhan51 and BRRI dhan52 are some of the varieties for which BRAC helped fast-track the diffusion of the technology in coordination with the Department of Agriculture and Extension (DAE) of the country,” he added.

“Our third focus is on climate-vulnerable areas,” stated Dr. Islam. “Coastal zones are highly vulnerable to climate change. These areas have problems such as saline intrusion and flooding.”

Dr. Islam explained that fish is also a very big component in the south where the coastal zones are located. The country became the fourth-largest inland freshwater fish producer in the world, for which BRAC fisheries activities also significantly contributed along with the government and other partners. 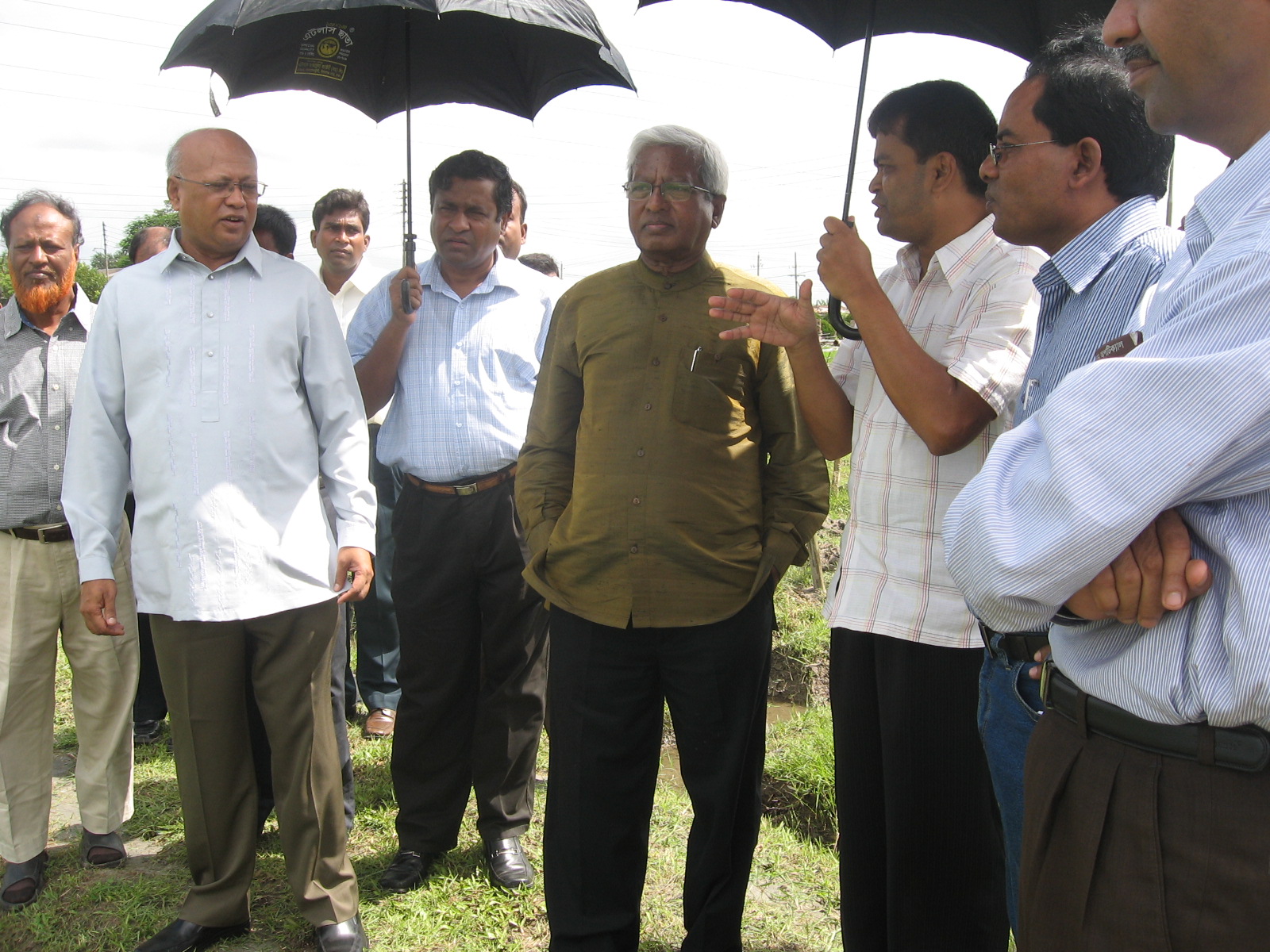 A worthy partnership
“BRAC is a worthy partner of the project, Unlocking the production potential of polder communities in coastal Bangladesh through improved resource use efficiency and diversified cropping systems, because of its expertise in technology dissemination,” Dr. Islam said. The project, also known as SIIL-Polder, was initiated under the flagship of USAID’s Feed the Future (FtF), the Sustainable Intensification Innovation Lab (SIIL) of Kansas State University (KSU), and IRRI in partnership with BRAC.

“Aside from IRRI, BRAC has been routinely partnering with other international institutions to improve the livelihood of the community in the south, particularly after the cyclones Sidr and Aila devastated the country,” Dr. Islam added.

Moreover, BRAC has a good infrastructure of 2,500 branch offices spread all over the country. Its infrastructural capacity makes it easy for the organization to implement project activities.

BRAC is not new to projects similar to SIIL-Polder. The organization was a partner under the CGIAR Challenge Program on Water and Food (CPWF), in which one of the components was led by IRRI. In fact, the SIIL-Polder project is the continuation of the CPWF and CGIAR Research Program on Water, Land, and Ecosystems when it comes to improving the productivity of the coastal zones of Bangladesh.

The SIIL-Polder project targets 600 households in Polder 30. Although this may not seem many, the real count starts “beyond the project.” BRAC will ultimately target 100,000 farmers in two years, according to Dr. Islam.

“This may sound ambitious,” stated Dr. Islam. “But, we will be promoting the technologies together with DAE, especially when the technologies are technically sound, economically viable, and socially acceptable.”

“With its success in its value chain approach to agricultural development, BRAC, as a strategic partner, will play a key role in attaining food security through improved agricultural productivity in coastal Bangladesh,” said Krishna Jagadish, leader of the SIIL-Polder project and associate professor at Kansas State University.