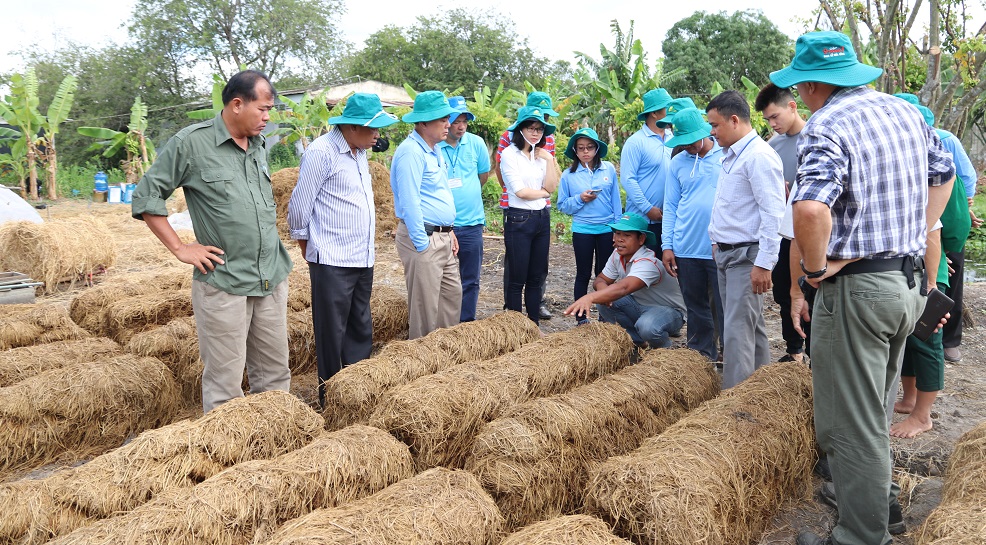 Participants from Cambodia and the Philippines study a technology developed by Can Tho University for using rice straw as a growing medium for mushroom. (Photo: IRRI)

CAN THO, Vietnam—Traditional rice straw management practices in most rice-growing countries like Vietnam involve burning the by-product of rice farming. However, this practice is not only insufficient given the country’s vast rice-farming lands where about 26 million tons of rice straw is produced every year. It is also hazardous to human health and the environment.

Recently, Can Tho University developed a breakthrough technology for using rice straw as a growing medium for mushroom as an option to burning. The technology has helped the mushroom industry grow significantly, making mushrooms one of the top crops in Vietnam.

“Can Tho University has conducted several kinds of research to optimally produce mushrooms using rice straw,” said Dr. Le Vinh Thuc, a lecturer from Can Tho University and served as a facilitator for a recent training on preparing rice straw as a growing medium for mushroom attended by about 20 participants from Cambodia and the Philippines. “We want to share our experience with other countries and hope that they can learn something from us and find some useful techniques that they can apply in their countries.”

Dr. Ngo Thi Thanh Truc, a lecturer on environmental economics, said that mushroom has become one of the main crops in Vietnam. Mushroom exports were valued at USD90 million in 2016, according to media reports. This led to more initiatives by the Vietnam government to improve its production and quality and pursue more rice straw management options. It also became one of the mitigation options to reduce methane emission in Vietnam.

“This hands-on training was organized to promote outscaling of the technology as an alternative to traditional rice straw management practice in other countries like Cambodia and the Philippines,” said Dr. Nguyen Van Hung, IRRI’s project scientist on rice straw management. “It is a way to promote cross-country learning among the three project countries.”

“The daunting task of growing mushrooms got me interested,” said Doan, a 22-year old student at Can Tho University. “I want to explore other options to improve the technology and practice
I plan to venture into a mushroom-growing business because there are a lot of opportunities for improving the situation and at the same time help farmers in my area who are burning rice straw in my village.”

Ms. Virginia Ompad, a science research specialist at the Philippine Rice Research Institute, shared her experience about the training. “I am amazed by the policy support and research efforts for improving the practices that would enable farmers to grow mushrooms optimally.”

“There is much to be done to improve the mushroom growing industry,” according to Truc. “We still need to improve the yield and shelf life of the mushroom, and improving the quality of rice straw as a growing medium. We can take it one step at a time.”

The training is part of the initiatives of the Rice Straw Management project of the International Rice Research Institute funded by the Federal Ministry for Economic Cooperation and Development (BMZ).