The high-diversity vegetation patches were designed for farmers as part of the “tool kit” of ecological engineering—a rapidly growing discipline that attempts to create managed ecosystems with benefits for both people and nature. 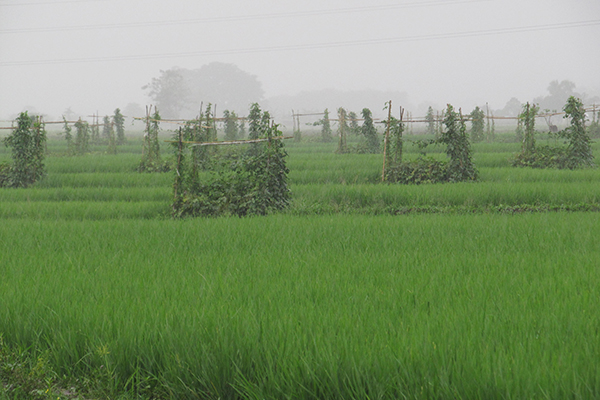 As our truck bounces down the narrow muddy track toward the Alubog family farm in Colonia, Bukidnon, Philippines, a huge irrigation canal, charged by the recent heavy rains, roars beside the road. The morning sun is heating up, clearing the low-lying mist to reveal a strange new landscape: a cluster of towering green pillars like the neatly arranged leafy temples of an abandoned jungle city is punctuated across the farm. The structures have attracted the attention of local farmers and are intensely monitored by scientists from the International Rice Research Institute (IRRI) and the Philippine Department of Agriculture (DA) that regularly visit this corner of Mindanao.

These new structures, which first appeared in late 2013, are part of an effort to promote ecological balance in rice fields. Technically referred to as high-diversity vegetation patches, they offer refuge to a range of beneficial insects, spiders, and birds that protect the neighboring rice from hungry pests. The patches also provide farmers with fruits and vegetables, including okra, string beans, and bitter gourds that are consumed by the farming household or sold in the local markets. 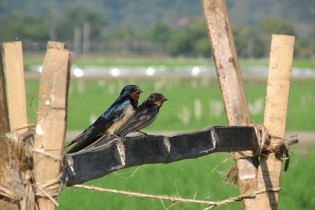 These patches were designed by IRRI and its partners at the DA. The initiative was funded by the DA-Bureau of Agricultural Research, with support from the Global Rice Science Partnership (GRiSP) and the German Ministry of Science and Education (LEGATO Project). The patches form part of the “tool kit” of ecological engineering—a rapidly growing discipline that attempts to create managed ecosystems with benefits for both people and nature.

The current patch design is the result of a series of trial-and-error experiments. Earlier work at IRRI had promoted the planting of flower strips on bunds to provide pollen and nectar for bees and parasitoid wasps, the latter being important enemies of formidable rice pests such as planthoppers and stem borers. With support from local governments, attractive rice landscapes with colorful flowered bunds have blossomed around Asia—particularly in Vietnam (see Vietnam turns back a tsunami of pesticides). However, unlike bees, some farmers were not attracted to the flower strips, preferring to grow food or medicinal plants on their bunds.

The high-diversity vegetation patches were designed for farmers to grow the vegetables they wanted using the best combinations of plants and best configurations of patches to enhance biodiversity while reducing potential problems with rats and maintaining the original functions of bunds as water levees and pathways. IRRI scientists pay careful attention to the timing of flowering and the abundance of flowers produced by the different vegetable plants. For example, bitter gourd and cucumber are particularly prolific flower producers and are highly suited for the patches. Furthermore, the candidate vegetables had to be robust and tolerate the extreme conditions of rice bunds, which have large gradients of moisture and nutrients from top to bottom.

Responses from farmers and wildlife 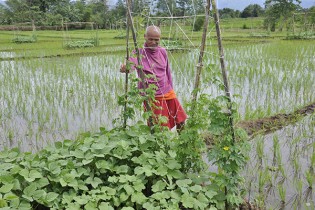 In 2014, high-diversity vegetation patches sprouted up at several sites in the Philippines. And, Filipino farmers and neighboring wildlife responded favorably. Results are surprising at the sites. Not only were the vegetable patches generally successful in attracting useful predators (such as spiders, lady beetles, and parasitoid wasps) and pollinators (such as bees and butterflies) but researchers also noted an increased abundance and activity of insectivorous birds.

Birds not often associated with rice fields, including barn swallows, pied trillers and long-tailed shrikes, could be seen actively searching among the rice plants for caterpillars and other insects. Three species of kingfisher used the patches as perching sites and one of these is the collared kingfisher, which actively consumed golden apple snails from the rice fields. Damage to rice from insects was generally low, and, where rice plants were attacked early in the season, pest populations were halted. The rice compensated well, giving good yields (3 to 6.7 tons per hectare in rainfed systems and 5.3 to 9 tons per hectare in irrigated systems during the dry season) by harvest time. 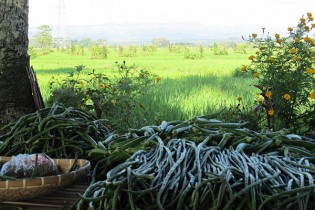 VEGETABLES PILED up on the table were produced in the high-diversity vegetation patches that can be seen interspersed among the ricefields in the background. The chemical-free vegetables and rice are highly sought after in local markets. (Photo: Finbarr Horgan)

All this was good news— rice fields without the use of any pesticides could achieve up to 9 tons per hectare at irrigated sites. But one added bonus made this intervention even more attractive. Where vegetable husbandry was best, the small vegetable patches could produce more than 100 kg of string bean and okra and about 10 kg of mungbean for every 100 meters of planted bund. These fruits not only became an added source of food for the farmer participants in the study but were sought after at the local markets because they were chemical-free. These experiences with ecologically engineered rice ecosystems indicate that balanced, healthy ecosystems can be productive and profitable. The little vegetable patches among the rice fields in Mindanao should remind observers that the most satisfying rice is produced in harmony with nature.

Dr. Horgan is a senior scientist and Ms. Ramal, Ms. Bernal, and Mr. Villegas are researchers in the Crop and Environmental Sciences Division of IRRI. Their research aims at restoring ecological balance in rice ecosystems and reducing pesticide use.

Dr. Jamoralin and Mr. Pasang are researchers at the Rizal Agricultural Station in Tanay, Rizal, Philippines.