India has come a long way in the past 5 decades from a country with a severe food deficit to being a major grain exporter. The frequent food shortages in the 1950s and 60s and large-scale U.S. food grain assistance, especially wheat through the PL-480 program, seem to be a distant memory now. Growing up in the eastern state of Odisha, I vividly remember women and children lining up in front of my grandfather’s house with a bowl in their hands to receive PL-480 wheat porridge for breakfast and lunch. 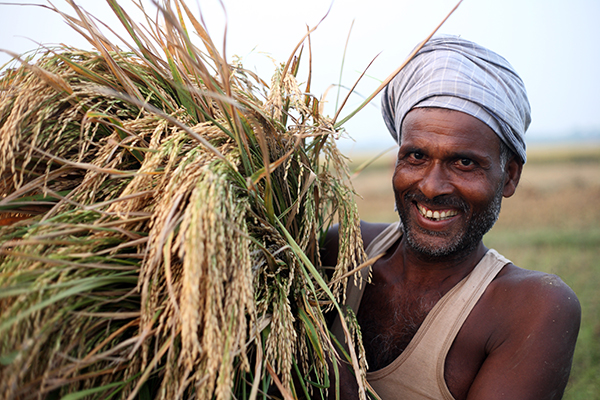 The Bihar famine in the mid-60s is regarded as a turning point for India’s food production. As described in The famine that India did not waste, an article published in Business & Economy, then Prime Minister Indira Gandhi realized the link between food sovereignty and independence in foreign affairs as the U.S. used its PL-480 food aid release to influence India’s stance on American policy toward Vietnam.

Lester Brown, cofounder and president of the Earth Policy Institute in Washington, D.C., has a different take of the event. In U.S.-India: Dealing with monsoon failure, he says the U.S. used the release of food aid during the Bihar famine to force the country to reform its food policy that served the urban population through a price ceiling to guarantee a floor price for farmers to encourage food production. The U.S. President at that time, Lyndon Johnson, was worried that India was neglecting its agriculture and becoming too dependent on U.S. food aid to overcome its deficit.

Whatever the motive was, the end result has been more than satisfactory. Indian rice and wheat production in the past 5 decades rose by more than three- and eightfold, respectively. During this period, per capita availability increased by more than 10 kilograms for rice and 50 kilograms for wheat. The rise in grain production eventually transformed India from a grain importer to an exporter in the mid-90s (Fig. 1). Since then, grain exports (rice, wheat, and maize) have steadily increased, reaching 24 million tons by 2012-13. The transformation of the rice sector was even more startling, with India dethroning Thailand to become the largest exporter of rice in 2012. The Thai rice pledging scheme implemented in late 2011 definitely boosted India’s rise to the top of the export chart, but India has continued to export in excess of 10 million tons even after the pledging scheme was removed in early 2014. Thailand edged past India in 2014 by exporting 10.97 million tons of rice after stopping the pledging scheme in 2014 as compared to 10.9 million tons for India (source: PSD, USDA).

Within rice, the biggest success has been the transformation of the basmati industry. Up until the early 1990s, Pakistan dominated the basmati market, but the rapid development of milling, processing, and packaging in the Indian basmati industry has made it the market leader today. In 2013-14, India exported around 3.76 million tons of basmati compared with 0.75 million tons of exports by Pakistan and earned a foreign exchange of nearly USD4.8 billion (source: Agricultural and Processed Food Products Export Development Authority or APEDA). During the same period, India exported 7.13 million tons of nonbasmati rice, primarily broken and parboiled rice, earning an additional foreign exchange of USD2.9 billion (source: APEDA).

The rising cost of success

There is no such thing as a free lunch. India spends billions of dollars on supporting its agricultural sector. The suite of policies it started in the mid- 60s, that is, a minimum support price and input subsidies (for fertilizer, seed, water, electricity, machinery, among other inputs) for farmers and a food subsidy for the poor remain in place. These policies, without any doubt, played a key role in improving India’s food security both nationally and at the household level but, at the same time, these policies have become a serious burden to the Indian exchequer. For the fiscal year 2015-16 (April-March), the central budget earmarked around USD20 billion for food subsidy and USD12 billion for fertilizer subsidy. On top of that, a few additional billions are spent on subsidizing credit, machinery, irrigation, power, and seed. These subsidies will continue to grow in the future if continued in its present form.

Another serious problem facing Indian rice production is the declining groundwater in its many rice-growing belts. In rice-growing states such as Punjab, Haryana, and Tamil Nadu, the free electricity and the diesel subsidy have made the excessive withdrawal of groundwater worse. An article in National Geographic stated that the water table in India is dropping at an average of 1.4 meter per year. If this trend continues, India’s food security will be seriously affected in the future. Given the growing water problem in the country, Indian exports of 40 trillion liters of precious water annually—in the form of 10 to 11 million tons of rice—raises an important question of overproduction of rice in the country. On top of that, the 7 million tons of nonbasmati rice are normally exported at a price that hardly covers the true cost of production if you take into account the input subsidies (for fertilizer, electricity, seed, machinery, etc.) provided to the farmers.

What needs to be done?

The reform of these subsidies, particularly for fertilizer and food, is long overdue. The current government clearly intends to tackle this “800-pound gorilla” that is so deeply rooted in the system. The government is seriously considering the recommendations of the Shanta Kumar Panel to deregulate the fertilizer sector and provide a cash subsidy of INR7,000 (around USD110) per hectare to farmers. Similarly, the government is also looking into the panel recommendation to reform the grain subsidy program by implementing cash transfers in cities with a population of more than 1 million in grain-surplus states and an option for cash or physical grains in grain-deficit states.

In an attempt to reverse the increasing ground water depletion in major rice-surplus states such as Punjab and Haryana, and reduce pressure on these states to meet the country’s food need, the government rolled out programs such as the National Food Security Mission and Bringing Green Revolution to Eastern India to improve the productivity of rice in eastern India. These efforts have resulted in some sizable increases in rice production in the eastern states in the past decade. The average yield of seven eastern states increased by more than 40% between 2004-05 and 2012-13 and production increased by 16 million tons (Fig. 2). During that same period, the rice area in Punjab and Haryana also increased slightly from 3.68 million hectares in 2004-05 to 3.87 million hectares in 2012-13, with production increasing by one million tons.

The recent trend suggests that the paddy yields in the eastern states will continue to rise in the future with greater use of quality seeds, flood- and drought-tolerant varieties, and improved production practices. There are no indications of shifting from rice in Punjab and Haryana into less water-intensive crops. The shift will not happen unless the government removes the minimum support price for rice or provides an assured price for alternate crops that will be equally or more profitable than rice in the region.

No one can deny India’s success in food grain production and its transformation from a food-deficit country to a major grain exporter in the world. What India did to achieve this milestone was to meet the need of the hour to spare millions from starvation and poverty. But, the time has come to think beyond just the quantity of grain production and more along the line of sustainability of the production system, including the cost of subsidies. Reforms of food and input subsidies will not be easy but this needs to be done at the earliest. As eastern India expands its rice production to take care of the country’s food needs, the state governments in Punjab and Haryana, with the help of the central government, should devise a strategy to reduce their area under rice, particularly nonbasmati rice, to relieve the pressure on groundwater.

Dr. Mohanty is the head of the Social Sciences Division and program leader (Targetting and policy) at the International Rice Research Institute.