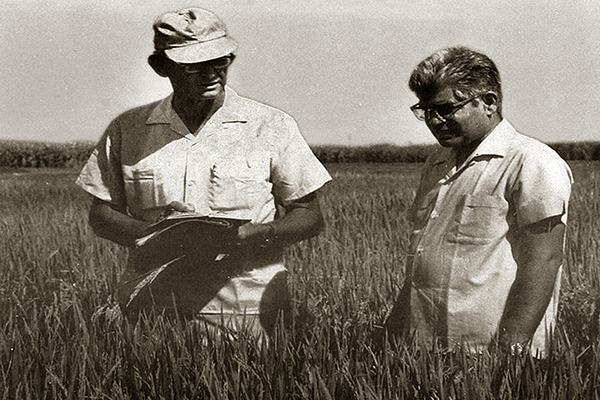 In 1965, the Indian Council of Agricultural Research (ICAR) appointed S.V.S. Shastry, a distinguished breeder and geneticist, as its first coordinator and project leader while the Rockefeller Foundation designated Wayne Freeman as the joint coordinator. Dr. Freeman also later served with distinction as IRRI’s first representative in India. (Photo: DRR)

At the time of establishing the International Rice Research Institute (IRRI) in 1960, Dr. Sterling Wortman of the Rockefeller Foundation seriously considered India as a potential location for IRRI. However, Los Baños in Laguna, Philippines, was chosen as the main location for IRRI based on many factors.

Jose Drilon, IRRI’s first executive officer, and Arturo Tanco, Philippine Agriculture Secretary, played key roles in getting IRRI established in the Philippines. This has been fortunate since the Philippines has been an excellent host and has also provided high-quality human resources for the Institute, apart from land and other facilities.

I visited IRRI for the first time in 1964. I was greatly impressed with the germplasm in the field, with emphasis on a new plant architecture, which could make use of soil nutrients and water most effectively. There was also great emphasis on breeding varieties resistant to major pests and diseases. Therefore, I strongly recommended to the Government of India to enter into a mutually beneficial partnership with IRRI. The Institute also invited Indian visionaries such as K.R. Damle, then Secretary of Agriculture, to serve on its first Board of Trustees in 1960.

During the International Rice Year 1966, the Government of India honored Robert Chandler, the founding director general of IRRI, with the International Rice Prize. Since then, the relationship between the Indian Council of Agricultural Research (ICAR) and IRRI has been strong, mutually beneficial, and a proven model for symbiotic partnerships among research institutions.

ICAR and IRRI started developing memoranda of understanding and annual work plans in order to provide structure and purpose to the partnership. In association with the Rockefeller Foundation, ICAR also established an All India Coordinated Rice Improvement Project (AICRIP) with headquarters in Hyderabad in 1965. This provided an opportunity for a more targeted relationship with IRRI. In 1966, AICRIP received from IRRI a set of 300 strains of rice containing genes for resistance to pests and diseases and possessing a nonlodging plant architecture. Varieties developed at IRRI have been used in the hybridization program in AICRIP.

Another important contribution of IRRI has been in human resource development. A wide range of researchers, including senior scientists and postdoctoral fellows, were given opportunities to visit IRRI and work at the Institute for some time with appropriate counterparts. Several PhD scholars completed their course work at the Indian Agricultural Research Institute (IARI) and other institutions in India and conducted their research work at IRRI.

The exchange of genetic material between IRRI and AICRIP was also intensified. In 1981, IRRI delivered cytoplasmic-genetic male sterile (CMS) rice lines to India. CMS is a condition of inablity of a plant to produce functional pollen. It is an important tool in hybrid seed production. Hybrids often exhibit heterosis or hybrid vigor, whereby the traits of a hybrid progeny are enhanced as a result of the genetic combination of its parents. IRRI converted Pusa 167-120-3-2 into a CMS line (IR58025 A). This became an important source for hybrid rice breeding. India also used highyielding and disease- and pestresistant IRRI varieties such as IR20, IR22, IR26, and IR72, among other varieties, in the Indian rice breeding program. IR36 and IR64 are still very popular among Indian farmers. IRRI also identified the Xa21 gene for bacterial blight resistance in wild rice (Oryza longistaminata), which was sourced from India. Also, IRRI and India saw potential in FR13A, a flood-tolerant rice variety grown in limited areas of eastern India from which the famous SUB1 gene was ultimately identified. Scientists from IRRI and India have published several joint papers.

The IRRI-India partnership has been an outstanding exercise in promoting collaboration, which advances global rice science and development on the one hand and India’s rice production on the other. Because of its symbiotic nature, this partnership has not only endured, but has been enriched over the past half century. I am pleased that this issue of Rice Today is chronicling a remarkable example of the power and value of partnership between CGIAR institutions and national agricultural research and extension systems.

Dr. Swaminathan is the founding chairman of the M.S. Swaminathan Research Foundation. He is a former IRRI director general (1982-88) and is known as the father of the Green Revolution in India.