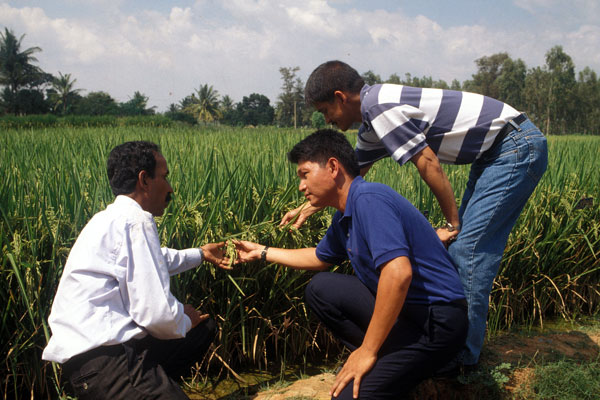 The Indian Council of Agricultural Research (ICAR) and the International Rice Research Institute (IRRI) are delighted to jointly observe 50 years of successful rice research in India. During 12-15 April 2015, around 400 Indian researchers will be holding the 50th Annual Rice Group Meeting of the All India Coordinated Rice Improvement Project in Hyderabad.

ICAR’s Hyderabad-based Directorate of Rice Research (DRR), recently named the Indian Institute of Rice Research (IIRR), is also planning special events later this year to celebrate its half century of significant contributions toward ensuring food security for all Indians.

The India-IRRI partnership has been a fruitful synergistic relationship. IRRI has had a long tradition—since the 1960s—of tapping into the unique expertise of many prominent Indian scientists to guide its research, governance, and management. Over the years, more than 50 Indians have distinguishingly served—or are serving—IRRI as globally recruited staff and 17 have been decision makers as members of the Board of Trustees. Since 1964, many Indian scholars have studied at IRRI to earn advanced degrees or participate in other educational programs.

Indian scientists at IRRI have contributed significantly to IRRI’s success in using cutting-edge science to help bring food security, economic growth, and environmental protection to the world through their dedicated research and administrative efforts. G.S. Khush, the celebrated rice breeder and 1996 World Food Prize Laureate, worked for 34 years at IRRI and made countless contributions to keep the Green Revolution in rice production on the right path, especially with his breeding team’s development of landmark varieties IR36 and IR64. Other prominent Indian researchers, as international staff members at IRRI, have helped the Institute become what it is today. They are listed on the IRRI-India website.

ICAR and IIRR especially appreciate IRRI’s initiative in setting up, in 2012, the South Asia Rice Breeding Research and Training Hub at the International Crops Research Institute for the Semi-Arid Tropics in Hyderabad. The hub is already providing targeted breeding and training in India with a spillover benefit to other countries in the region.

ICAR and IRRI are seeking new opportunities to increase India’s focus on upstream and innovative research and to catalyze the transfer of the new technologies to the region’s farmers and others in the value chain. In addition, the partnership is playing a major role in further developing the rice sector, particularly in eastern and southern India.

In this issue, on Grains of truth, you can read more about the historic India-IRRI partnership from the perspectives of Dr. Swaminathan and J.K. Ladha, principal scientist and IRRI representative for India and Nepal. Also, find out on pages 10-11 why progressive Indian farmer-researcher Nekkanti Subba Rao, standing in the same field on his Andhra Pradesh farm, is featured on a second Rice Today cover.

Indian rice breeder extraordinaire E.A. Siddiq talks about his life’s work in an exclusive IRRI pioneer interview. Dr. Siddiq developed semidwarf basmati varieties for the country’s agricultural export trade and stiff-strawed varieties for India’s now-thriving rice-wheat rotation. While on the IRRI Board of Trustees during the early 2000s, he fought for the continuation of the International Network for the Genetic Evaluation of Rice as well as hybrid rice research, which were on the budget-cut chopping block at the time.

Late last year, a cadre of renowned Indian rice scientists and administrators was asked to give testimonials on behalf of the thriving India-IRRI relationship. There was an enthusiastic response. Topics ranged from achievements in hybrid rice and building India’s scientific capacity to addressing climate change. Read selected highlights of these tributes and see the full set here.

The centerfold features the panoramic mural of Indian rice farming mounted on the wall of the DRR’s Rice Museum in Hyderabad. Commentary on what it signifies comes from B. Mishra, former DRR project director, who commissioned the work in 2005. This issue’s map section provides an interesting assessment of the rice preferences of urban consumers in India and Bangladesh.

So, while reflecting on the last 50 years, read and enjoy these features and others in this special India-focused issue of Rice Today!

In the meantime, as the directors general of our respective organizations, we pledge that ICAR-IRRI will continue the partnering spirit of the last five decades to involve our scientists in enhancing food security in not only India but in all of South Asia.