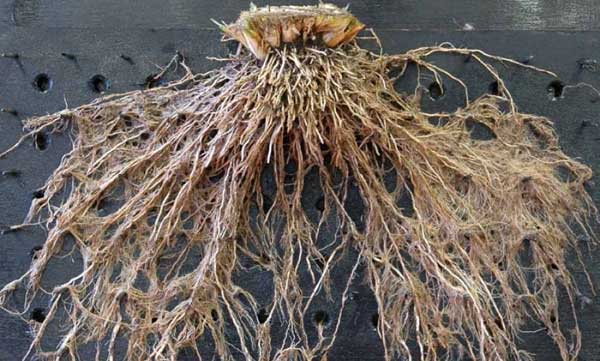 An international team led by the National Institute of Agrobiological Sciences (NIAS) in Japan, which includes scientists from the International Center for Tropical Agriculture (CIAT), has discovered the DEEPER ROOTING 1 (DRO1) gene that makes the roots of rice plants grow downward instead of outward. This allows the plants to reach water held deeper in the soil. Plants with DRO1 can continue to grow and produce grain even under extreme water stress.

The researchers also found that the DRO1 gene appears to change only the angle of root growth and slightly increase the length of the root tips, rather than the overall root density, meaning that energy is not diverted away from the production of grain.

“It’s a very exciting discovery,” said CIAT’s Manabu Ishitani, who was part of the research team. “We’ve known for some time that deeper roots can buy farmers extra time during drought, but, until now, we haven’t known which gene in rice is responsible for root architecture, or how to control it.”

Dr. Masa Iwanaga, president of the Japan International Research Center for Agricultural Sciences, welcomed the findings. “The Green Revolution in the 1960s and ‘70s was made possible by the introduction of short-stature, shallow-rooted cereals capable of producing high yields,” he said.

“The DRO1 gene confers deeper root system architecture to crops, which will surely mark the start of an ‘underground revolution’ in crop improvement, which will be essential for meeting the increasing worldwide demand for food,” he added.

Rice feeds around half of the world and production needs to increase by around 40% in order to meet the demand of more than 9 billion people by 2050. But, each year, drought affects some 23 million hectares of rainfed rice in South and Southeast Asia alone. In parts of India, water scarcity can cut rice yields by more than a third, equal to losses of US$800 million annually. Water scarcity is also expected to increase because of climate change and increased demand for water for industrial and urban use.

“Water availability will soon become the most limiting factor in rice production around the world,” Dr. Ishitani said. “Improving the water-use efficiency of rice is essential if the crop is going to continue to be relied upon as a staple food for half of the world.”

He hopes that deeper roots might also be able to gain access to additional nutrients deep in the soil, meaning farmers could use fertilizer more efficiently.

Since its release in 1985, IR64 has been widely grown in South and Southeast Asia. Its positive traits such as high yield potential, good grain quality, wide adaptability, and good disease resistance have made IR64 very popular among farmers. But, this commercial variety has short roots and is drought-prone. Although IR64 already has the DRO1 gene, the plant cannot produce the necessary proteins that enable the gene to function effectively.

The scientists crossbred the high-yielding IR64 with Kinandang Patong, a deep-rooting upland rice variety from the Philippines. Through conventional breeding techniques, the scientists combined the high yield of IR64 with the fully functional DRO1 gene in Kinandang Patong. NIAS evaluated the resulting plants grown in rainfed lowland trial fields with scientists at the International Rice Research Institute in the Philippines.

The roots of the resulting plants were able to reach more than twice as deep as those of IR64. When tested under simulated conditions of moderate drought, IR64 yields decreased by almost 60%, while the crossbreeds suffered only a 10% yield loss. Under extreme drought, IR64 failed completely, but the new rice plants continued to produce grain— about 30% of the yield of unstressed rice plants growing under normal conditions. “The discovery of the DRO1 gene is a significant breakthrough in research to adapt food crops to water stress, especially as farmers around the world begin to feel the pressure of climate change on water availability,” said Joe Tohme, director of CIAT’s Agrobiodiversity Research Area. “Technologies like this can help boost production of one of the world’s most important crops.”

Neil Palmer was formerly the public awareness coordinator at CIAT.