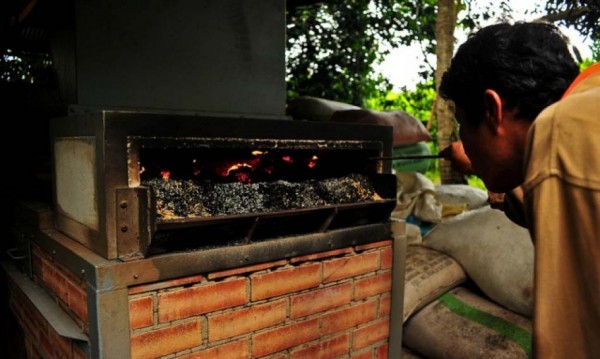 If the searing heat wasn’t enough, the thick, dark smoke that engulfed the area surrounding the furnace made the workers want to give up. The smoke wasn’t confined only to the immediate vicinity, but it affected neighboring areas as well. This “smoke machine” was the inclined-grate design of a rice hull furnace used to provide heat to a flatbed dryer that is used to dry rice.

“The workers couldn’t stay long near the furnace because it was too hot,” says Jose Gagelonia, a flatbed dryer operator in the province of Nueva Ecija, Philippines, about the old furnace of his dryer. “The smoke and ash coming from it irritated our neighbors, who said that they ended up smelling like smoked fish.”

The furnace, a key component in flatbed dryers, greatly affects the quality of the seeds and grains dried in it. Rice farmers and seed producers who came to Mr. Gagelonia to have their produce dried often ended up with grains that were unevenly dried and reeked of smoke. Because of this, they opted to have their grains sun dried.

Cleaner heat
Now, thanks to the new semi-automated downdraft rice furnace (dRHF) designed by experts at the International Rice Research Institute (IRRI), farmers and seed producers have a better choice.

In the old updraft furnaces, ashes were sucked from the top of the burning husk, especially when the grill bed was stirred or fed with rice hull. The new dRHF allows hot air to go down into the chamber and blower (“downdraft”) instead of being blown upward and outward. This produces clean hot air because the burning husk on the combustion grill filters the ashes.

The dRHF has an automatic feeding mechanism that controls the amount and frequency of the rice hulls fed into the combustion grill using a programmable electronic timer connected to a motor. This produces a clean and steady combustion, resulting in a constant drying air temperature.

The cleaner combustion greatly reduces machine operators’ exposure to heat and smoke because they need to check on the new furnace only every half hour (instead of the old practice of every 5 minutes) during an 8-hour operation.

Perseverance and perfection
The dRHF was first developed through collaboration between IRRI and Hohenheim University in Germany, in the 1990s. It was intended to be used for drying systems with small energy requirements. However, the concept was not successfully introduced to its target market in Southeast Asia, setting back the testing of the furnace’s design.

Fortunately, Nong Lam University in Ho Chi Minh City, Vietnam, an IRRI collaborator, continued working on the design of the dRHF. Its improved design was tested for commercial use in three 4-ton-capacity flatbed dryers in Vietnam before IRRI adapted it for further testing at Philippine pilot sites.

Although the development of the dRHF was partly supported by the Irrigated Rice Research Consortium— through the IRRI Postharvest Unit—a lack of funds and ideal test sites for adaptive research in the Philippines proved to be a challenge. The solution arrived in 2010 when Generoso Bautista, an agricultural engineer by education and a commercial airline pilot by profession who had just acquired a rice farm in the province of Batangas, became interested in flatbed dryers.

“I wanted to build a more efficient flatbed dryer for my own rice farm,” explains Capt. Bautista. “Then I came across an online Rice Today article, Machines of progress, which featured IRRI’s postharvest technology package and its impact on the lives of farmers. He contacted Martin Gummert, head of IRRI’s Postharvest Unit, who referred him to Pat Borlagdan, the engineer in charge of the testing of the dRHF in the Philippines.

On his farm in Batangas, Capt. Bautista and Engr. Borlagdan spent hours going over the design and discussing the parts that needed tweaking. “I financed the construction of the furnace, while Pat provided technical assistance,” says Capt. Bautista.

After 2 years of hard work, Capt. Bautista is now the proud owner of a rice hull furnace with aerodynamic fan blades.

“We could safely work around the new furnace without worrying about the heat and smoke,” says farm manager Luis Soliban, Jr.

Other beneficiaries
In Kidapawan, North Cotabato, the National Food Authority, one of the first recipients of the dRHF, suffered from high costs of drying and grain quality losses until the new furnace was installed in its warehouse.

In Peñablanca, Cagayan Valley, Don Lister, an entrepreneur, wanted to learn more about rice postharvest losses. While searching the Internet, he read a story about mechanical dryers using rice husk furnaces. He wasted no time in contacting Engr. Borlagdan, who sent him diagrams of the flatbed dryer, blower, and dRHF. After months of coordination, the 6-ton-capacity flatbed dryer with the dRHF was finally launched in March 2012.

“If the family can harvest rice, that’s good,” says Mr. Lister. “But, if we can help other farmers save their harvest, that’s even better.”

Interest in the furnace has continued to spread. Early technology adopters believe that the dRHF is a simple technology that the government should support and disseminate.

Marketable technology
Mr. Gagelonia runs a semi-automated dRHF and he manufactures made-to-order furnaces after he and 19 others attended training provided by IRRI on rice husk furnace manufacturing.

All materials used for fabrication are sourced locally, making them more affordable. He has already sold 12 rice hull furnaces to farmer groups and seed growers from all over the Philippines. He has also made smaller furnaces to fit dryers with lower capacity.

Capt. Bautista, on the other hand, still wants to continue improving the machine and he is now in the process of developing another type of furnace. In fact, an all-steel furnace sits in a shed on his farm, waiting to be taken to another farm for further testing.

Other training participants have also started making and marketing their own machines. Mr. Eugene Manalo from Laguna and Mr. Antonio Caspillo from North Cotabato have manufactured and sold the dRHF in their respective provinces.

Partnership forged in heat
Engr. Borlagdan, though no longer with IRRI, still provides technical assistance and shares his experiences to help improve the operation and maintenance of the furnace. He credits the public-private partnerships that had been formed for the successful adoption of the dRHF technology.

“Partnering with the private sector during the early testing stages became a valuable reference point when technological trials by government agencies failed,” Engr. Borlagdan explains. “It was easier to show that the dRHF works, and  is actually being used by the private sector.”

The IRRI postharvest team, in collaboration with the Asian Development Bank, has now taken steps to transfer the dRHF technology to other countries such as Cambodia and Indonesia.

“Farmers should be aware that the technology is available to them,” adds Capt. Bautista. “With support from both the private and public sector, technologies such as the dRHF could go a long way in improving the quality of rice— and life—of farmers.”
__________________
Ms. Rona Niña Mae Rojas-Azucena is a communication specialist at IRRI.