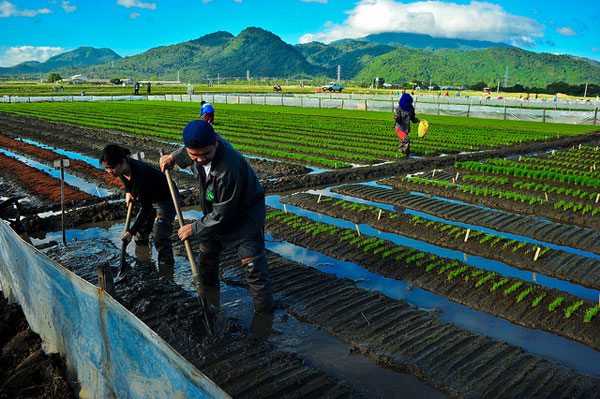 IRRI scientists getting down and dirty for Rice Survivor.

There was a time in recent years when it was apparent that an agronomist was a threatened species.

Government funding focused on infrastructure, industry, health, and education—not quite on agriculture. The private agricultural sector in developing countries was in its infancy, and NGOs were more concerned with microfinance than technical assistance that may give farmers new economic opportunities. The IT industry, banking, engineering, and medicine were the professions for those with top scores in high school.

This was not just a developing country trend. Actually, the agricultural profession has been getting less and less attractive to bright young people around the world. Traditional agricultural schools, in Australia for example, saw reduced enrollments. And, with pressure on university funding, some agricultural schools were merged with the environmental sciences. The status of being a farmer in society overall was low. This has not always been the case, though. I am the son of a farmer; for me, it was a source of pride.

In the early 2000s, I became aware of these changes. As a result, the status of agronomy as a profession also became less popular.

Agriculture had become a neglected industry, with declining funds since the late 1980s. Since then, research, public extension services, and infrastructure for agriculture had been in decline.

Come the 21st century, agriculture and agronomy saw more problems. Aside from the 2008 global food crisis and pest outbreaks, climate change made food security more uncertain. Add to this the challenges of a steadily rising population and scarcities of water, land, and a productive agricultural system. All these serve as a wake up call and represent a turning point in seeing the importance of an agronomist.

What needs to be revived

Agronomy is about crop production. Although a researcher may specialize in weed science or soil science, he/she must become comfortable with all aspects of crop production, including postharvest and the value chain up to the market.

A good turning point for the story of agronomists is how some organizations work to sustain their value.

At the International Rice Research Institute (IRRI), a new training course on agronomy is beginning during the 2013 dry season. It is called “Rice Survivor.” In this program, young scientists and extension agents are following the rice crop over the season for half a day per week.

Classes are not formal and the IRRI Rice Knowledge Bank is a reference source and will support production decisions. As much as possible, the trainees are doing most of the operations themselves. They are keeping a journal of all production decisions and discussions. For the dry season this year, four teams are deciding on all aspects of crop management. The practices to be chosen are direct-seeded rice, machine-transplanted rice and traditional cultivation, and manual transplanting. This emphasizes rice management, decision-making, and discovery learning as a team.

This, itself, is not enough. To meet the challenge of building confidence at the farm level, researchers should have a parallel village experiment for each station experiment as well as an opportunity for farmer focus group discussions. Issues such as land preparation, crop establishment, crop management, and, most importantly, the profitability of growing rice require such an interface.

We also need to look at the attractiveness of a career path, in which a young agronomist can be fast-tracked. In their first five years, a research agronomist should engage 20% of his/her time in extension. The United States land-grant system suggests that this should be the norm for his/her whole career. Also, during the first five years, both research and extension agronomists need a defined project to manage. If a young professional develops a competency early for an extension domain (for example, a rainfed two rice crop system) and the nuances across that domain, he/she will then develop confidence to work in any ecosystem.

Gone are the days when a department head directed all activities. Young professionals need space and opportunity to develop their own creativity around issues. This will help them see farmers as sources of innovations, and be able to take more leadership roles in research and extension.

Agronomy has been neglected, but the pressure for raising yield ceilings for food security in an environmentally sustainable way requires a new generation of agronomists to take up the challenge.

Dr. Noel Magor is the head of IRRI’s Training Center and program leader for Growth of the Rice Sector.