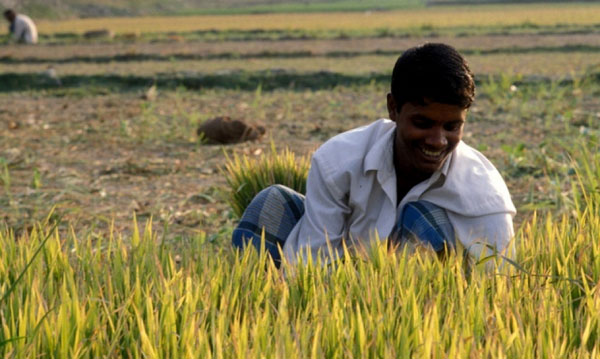 Rice is a staple for nearly half of the world’s seven billion people. However, more than 90% of this rice is consumed in Asia, where it is a staple for a majority of the population, including the region’s 560 million hungry people.
The success of the Green Revolution in the early 1960s witnessed a steady rise in Asia’s per capita rice consumption from 85 kilograms per year in the early ’60s to nearly 103 kilograms in the early ’90s. On the other hand, global per capita consumption rose from 50 to 65 kilograms per annum during the same period (Fig. 1, click to view). The rising per capita consumption plus the growing population more than doubled global rice consumption during this period from 150 to 350 million tons (Fig. 2, click to view).

However, since the early 1990s, strong economic growth in many Asian countries, particularly in China and India, halted the upward trend in global per capita rice consumption as consumers diversified their diet from rice to high-value products such as meat, dairy products, fruits, and vegetables. For the past two decades, global per capita consumption has been flat at around 65 kilograms, with a dip between 2001 and 2004 due to severe drought in China and India. As a result, this lowered global availability by more than 35 million tons, with a subsequent rise in per capita consumption back to 65 kilograms in recent years. The reversal in the declining trend in per capita rice consumption in heavyweights such as China, India, and Indonesia (Fig. 3, click to view) contributed to the recent rise in total global consumption: 50 millon tons in 7 years (Fig. 2, click to view).

Household consumer expenditure data collected by India’s National Sample Survey Organization (NSSO) also confirm the flattening in per capita consumption in recent years from the declining trend in the ’90s in all four regions in India.

In other countries such as Bangladesh and the Philippines, per capita consumption continues to rise across income groups in both urban and rural areas. National representative household consumption survey data collected between 2000 and 2010 from both the Philippines (Family Income and Expenditure Survey) and Bangladesh (Household Income and Expenditure Survey) confirm the trend.

Even high-income groups in both rural and urban areas are found to consume more rice with a rise in income. Unlike the Philippines and Bangladesh, per capita rice consumption is on a downward trend in Thailand, Vietnam, and Malaysia.

As we look ahead, income growth, urbanization, and other long-term social and economic transformations are likely to influence the composition of the food basket.

Normally, one would expect diversification away from rice to more high-value products such as meat, dairy products, fruits, and vegetables in the diet as income rises. But, the diversification rate in many Asian countries will also be influenced by the extent of government interventions in price control and subsidized food grain distribution.

India is a good example where the government has rolled out an elaborate food subsidy program to provide highly subsidized food grains (rice and wheat) for 65 million below poverty- line households, including nearly free food grains to 20 million Antyodaya Anna Yojana households, the poorest of the poor households.

Thus, it would be a mistake to bundle all Asian countries together and project them to behave like Japan and South Korea as they become wealthier. Each Asian country will be unique in the way it diversifies its consumption pattern as income rises. It may be reasonable to assume that diversification away from rice will be slow in many Asian countries and the minimum threshold of rice consumption for each country will be different.

Outside Asia, the current upward trend in rice consumption will continue in the future, with SSA leading the pack. The growth in rice consumption in SSA so far has primarily come from growing preference for rice among urban consumers with rising income. The preference for rice will inevitably begin to grow among the rural population as it becomes wealthier. If this happens, consumption growth for rice will be even stronger in the future than what has been witnessed in the past two decades.

Moreover, an additional 2 billion mouths will have to be fed around mid-century, when the world reaches the 9 billion mark, and this is projected to exceed 10 billion by the end of the century. If global per capita rice consumption follows the trend in the past two decades, then total consumption will grow at the rate of population growth.

Total consumption growth may even exceed population growth if the recent uptrend in per capita consumption in the “big three” countries (China, India, and Indonesia) continues.

Dr. Mohanty is the head of the Social Sciences Division at IRRI.