The SFLF pilot model seems to be a very attractive option for small farmers who can significantly increase their income by harmonizing and synchronizing selected operations to achieve scale and gain bargaining power in input purchase and output sales.

Rice farming in Asia is changing because of rural outmigration and growing nonfarm opportunities. The consequential increase in labor scarcity has led to a rapid rise in wage rates in all rice-growing countries in Asia. Since rice farming is traditionally labor-intensive, and with labor costs accounting for nearly half of the total cost of production, farmers have been quick to explore the possibility of replacing labor-intensive activities such as land preparation, crop establishment, harvesting, and threshing with appropriate mechanization to lower the cost of production. Small-scale farm mechanization and custom-hiring arrangements with machines are quickly evolving as viable solutions for smallholder rice farmers in the region. To further counter the infeasibility of mechanization for small farmers, several models of virtual land consolidation have started to emerge in different parts of Asia. The “Small Farmers, Large Field” (SFLF) model in Vietnam, which allows small farmers to benefit from economies of scale by pooling their small farms into large fields of 50−500 hectares to lower the per unit cost of using farm machinery, such as combine harvesters, is becoming popular. In four years, the area under the SFLF model skyrocketed in Vietnam from 8 hectares in 2011 to 196,000 hectares in 2015, with an increase in farmers’ profit of USD 110‒180 per hectare.

Similarly, in Thailand, an industrial rice farming scheme introduced by the Suphanburi Rice Millers’ Association, in collaboration with Suphanburi Rice Research Center, has convinced the farmers to grow one rice variety with synchronized planting and harvesting time on around 400 hectares. The idea is to lower the harvesting cost by 20−30% by providing service providers with a bigger contract for custom harvesting. 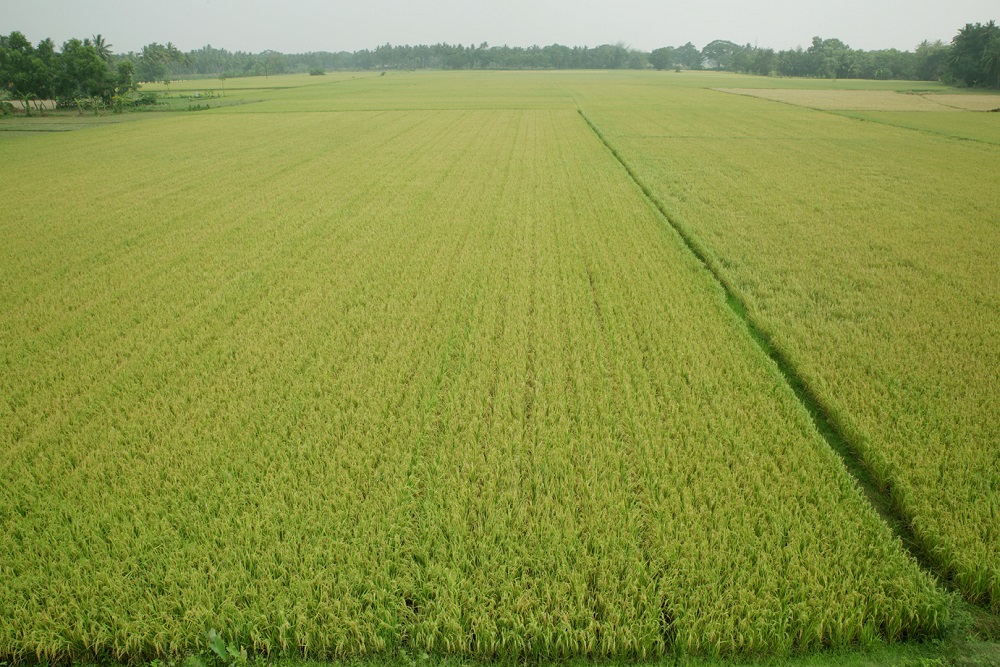 SFLF pilot experiment in Odisha
For the 2016-17 dry-season crop, we piloted a customized version of the SFLF model in Taraboisasan Hamlet near Bhubaneswar, the capital of the eastern state of Odisha in India. A total of 54 farmers with about 36 hectares participated in our pilot exercise. The participating farmers selected an eight-member committee to take on the role of facilitator between the farmers and implementing agencies. The participating farmers harmonized and synchronized selected activities and operations to achieve a scale effect and bargaining power. (A more detailed description of this experiment can be found in Piloting the Vietnamese “Small Farmers, Large Field” scheme in eastern India.)

The participating farmers decided to grow a single variety (BINA 11) using seed purchased from a certified seed producer facilitated by seed producers. In the previous dry season (2015-16), these farmers primarily grew five different varieties (BINA 11, Samalai, Samrat, Lalat, and Rangabati) using seeds from different sources (their own, other farmers, government agencies, and research institutes). In the next step, the farmers set up a mat nursery in nine patches, with the largest patch serving 12 adjacent hectares.

“It used to be extremely difficult for a tractor to move around within a small piece of land and it consumed additional fuel,” said Bimbadhar Biswal, the secretary of the Laxminrusingha SFLF Committee. “It took time to visit different field locations at different times and the group nursery saved time, energy, labor, water, and money for the farmers.”

We worked with the SFLF committee throughout the season in lining up input suppliers and service providers and negotiated cheaper prices for the farmers. The group identified the fertilizer requirement of each farmer and placed a single order with the Indian Farmers’ Fertilizer Cooperative Limited (IFFCO) by pooling funds. IFFCO supplied the fertilizer at the farmers’ doorstep at 15% lower than the retail price. IFFCO also conducted free soil testing for participating farmers but we let the farmers decide whether to follow the IFFCO recommendation on fertilizer application. Our observation is that none of the participating farmers followed the recommendation but instead made their own decision.

At the beginning of the season, we invited a few local millers to visit our site and explained our pilot project to them. The response was quite positive and they showed a keen interest in purchasing the paddy at a premium price because of the single variety. We facilitated a meeting between a combine harvest service provider and the village SFLF committee. The service provider readily agreed to charge USD 77 per hectare vis-à-vis the USD 31 per hectare paid by the SFLF farmers in the previous season. The farmers also spent less for land preparation, crop establishment, and herbicide and pesticide purchase. Before the harvest, the SFLF committee picked a miller based on offering price and reputation. The price received by SFLF farmers for their paddy was USD 16 per ton higher than the prevailing market price at that time. Based on the data collected from each participating farmer at the end of the season, the average per hectare profit was estimated to be USD 390 vis-à-vis USD 191 in the 2015-16 dry season.

Apart from the monetary benefits, the farmers saved time and energy in each of the farming activities done together. The farmers at our pilot site now mostly talk about the time they saved by having a group seedbed nursery and synchronized transplanting. The participating farmers also mentioned the time and money they saved because the fertilizer was delivered to them. Organizing themselves into a group also helped the participating farmers to obtain interest-free credit from each other under group solidarity rather than from micro-finance loans at an average 26% interest rate.

A miller’s truck picks up the harvested paddy purchased from an SFLF village at the farmers’ doorsteps. (Photo IRRI).

Going forward
In the 2017-18 wet season, the number of participating farmers increased from 54 to 77 with a total of 69 hectares. Many farmers from the nearby hamlet (part of the same revenue village) joined the group this season. The eight-member committee has expanded to represent the new farmers. Our role this season has been significantly reduced because the expanded committee is making most of the decisions in consultation with participating farmers. In addition, we are piloting this SFLF farming model in Khanijpur Village in Puri District. All 35 participating farmers in this village are women who are primarily sharecroppers.

The SFLF pilot model seems to be a very attractive option for small farmers who can significantly increase their income by harmonizing and synchronizing selected operations to achieve scale and gain bargaining power in input purchase and output sales. But, our experience suggests that the scalability of this model is not guaranteed. The SFLF model can spread but each new group will require handholding, facilitation, and technical support for one or two seasons to streamline the process and gain each other’s trust. Initial facilitation and local capacity building are crucial for the successful implementation of the model. It is also very clear that, once the process is in place, it is likely to be sustained for a longer time.

Over time, each group will customize the model based on its needs and requirements. Some will be very formal and fully integrated from end to end whereas others may be more informal and selective in their integration.
________________
Dr. Mohanty is the former head of the Social Sciences Division at the International Rice Research Institute (IRRI) and currently the regional director for Asia at the International Potato Center. Ms. Baruah is a PhD scholar at IRRI. Mr. Mohapatra is an assistant scientist in IRRI-India’s Applied Socioeconomics Unit, and Dr. Veettil is a scientist in IRRI-India’s Agri-Food Policy Unit.