Water use in rice farming needs to be optimized to improve water availability for urban needs. 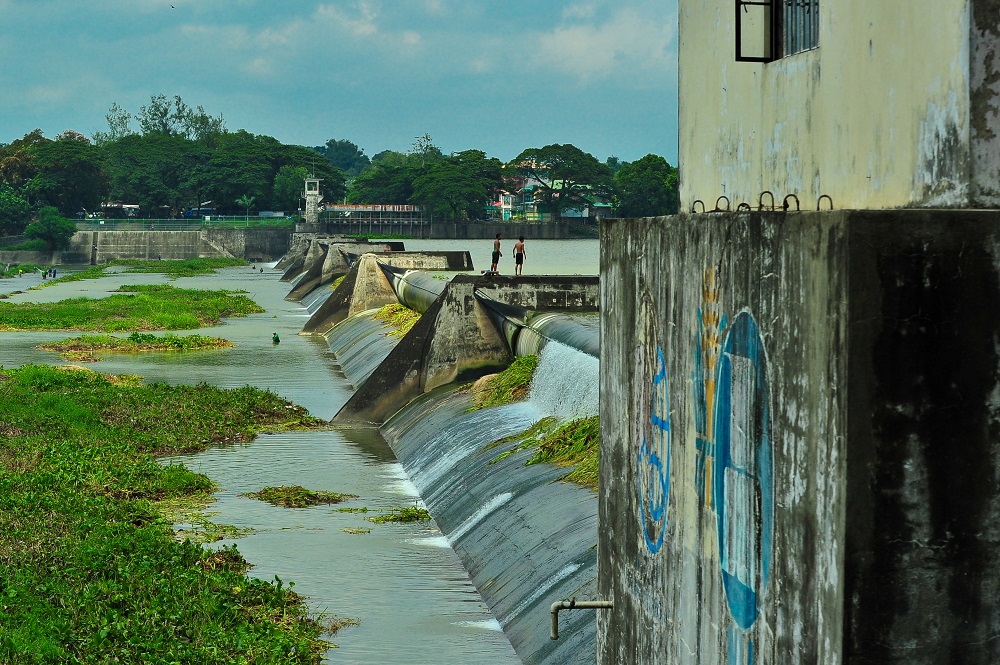 The Angat Dam in Central Luzon, Philippines supplies about 90% of raw water requirements for Metro Manila, one of the largest and most densely populated cities in the world. It also irrigates about 28,000 hectares of farmland in the provinces of Bulacan and Pampanga. (Photo by Isagani Serrano, IRRI)

Expansion of irrigated agriculture over the past half century, as well as the recent urbanization and rapid economic growth of Asia, have dramatically affected water use in the region. The increasing water demand for domestic, industrial, and instream uses is unbalancing the sectoral share of water, which not only harms the agricultural sector but also has an impact on the environment.

Whenever a region faces water scarcity, the water is generally diverted away from irrigation schemes into urban water systems such as those in Manila (Philippines), Bandung (Indonesia), Bangkok and Chiang Mai (Thailand), and Hanoi (Vietnam).

The complicated business of sharing water
Rice farming is by far the biggest user of developed freshwater resources globally, especially in Asia, where 90% of the world’s rice is grown. The way the tensions among users of agricultural, urban, and industrial water play out largely depends on how much water is allocated for rice. The water allocation for agriculture is often seen as economically inefficient and having low return compared with the nonagricultural sector. Reallocation of water for cities and industrial use at the expense of agriculture is seen as a common option. As the share of water surface decreases and as irrigated area expands, farmers start to exploit groundwater to meet the additional need for water.

Withdrawal of water from rivers for irrigation has reduced flows during the dry season. This allows seawater intrusion into lands that were formerly suitable for rice paddies in the Asian deltas. The overexploitation of groundwater, particularly in coastal regions where megacities are commonly located, causes saline groundwater to intrude into freshwater aquifers.

But, substantially reducing irrigated rice farming areas to lessen their share of water is not an option because rice production needs to increase in order to keep up with population growth. In many areas, shortages of irrigation water to ensure future rice harvests in Asia are of growing concern. In Southeast Asia alone, it is estimated that most of the 21 million hectares of dry-season irrigated rice areas will face economic or physical water scarcity by 2025. Thus, there is a nagging concern: to grow more rice with less water.

Making every drop count
Efficiency has always been the watchword for scientists at the International Rice Research Institute (IRRI) and its partner research institutes. When it comes to agriculture, particularly in rice production, water-use efficiency is a must for water to be also available for urban use.

“Spending on efficient use of fresh water for rice production, which feeds more than 4 billion people and whose food security depends on it, is undoubtedly a good investment,” said Bas Bouman, director of the Global Rice Science Partnership. “And, the good news is that IRRI scientists and their partners are thinking of ways to increase water productivity and efficiency.

“If we can increase water-use efficiency in rice production, it will be huge,” added Dr. Bouman. “Rice is grown by 144 million farm families, which is equivalent to 25% of world farmers, and receives 880 cubic kilometers of irrigation water or 35% of the world’s total. If we can save 15% of the water from that amount, we can free up more than 130 cubic kilometers. That is equivalent to more than 50 million Olympic-sized swimming pools. This is enough to provide a quarter to half of the world’s population with domestic water in a year.” 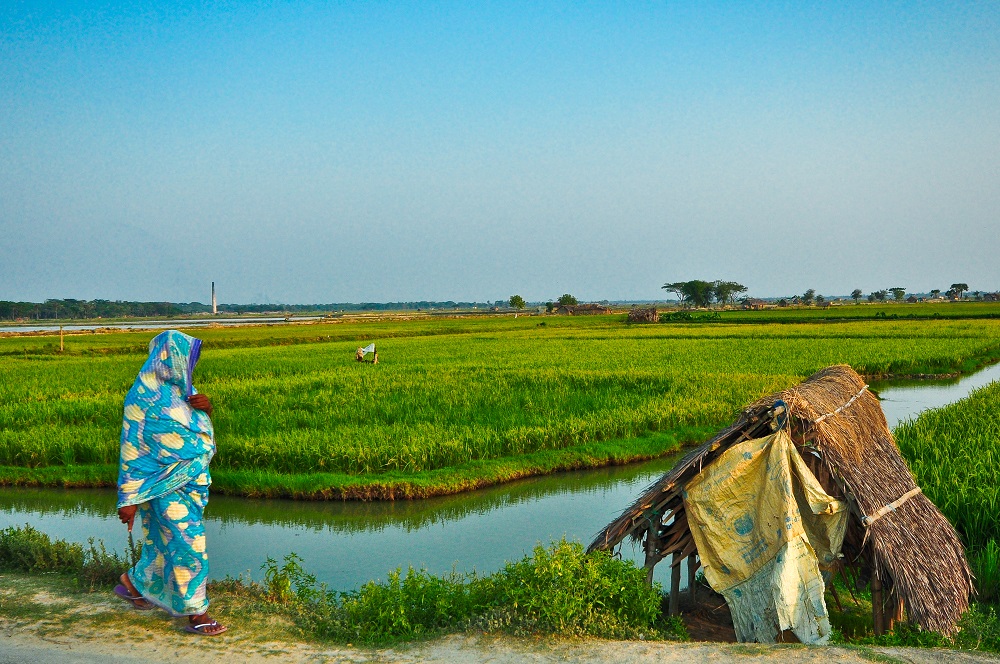 OPTIMIZING WATER use in rice farming aims to reduce the irrigation cost and increase the profits of farmers. (Photo by Isagani Serrano, IRRI)

These numbers inspire scientists to come up with improved water management strategies, with a vision of delivering them to millions of rice farmers threatened by water scarcity. What can be done? Identify hotspots to improve water-use efficiency. It is said that halfway to a solution is pinpointing where the problem lies. The institute sees the need to identify specifically the “hotspots,” or areas that have a high potential for improving water-use efficiency. To map, determine, and characterize these major hotspots, existing data and local expert knowledge, combined with detailed satellite imagery and ground verification, are the steps in this direction. Thus, policymakers and decision makers could easily identify and estimate the potential of water savings as well as the key factors affecting water availability. In this way, rice research and development can be invested where they are most needed.

Another step forward for water-use efficiency is having blueprints of water management strategies by location instead of a wider regional or national scope. The technological need of one specific location could be starkly different from that of another.

This is a simple device for farmers to determine whether or not it is necessary to flood a rice field. AWD can help farmers save up to 30% of the water with no yield loss and could even attain a small yield increase. The AWD technology is the dominant water management practice in China, and it’s spreading in Bangladesh, Vietnam, India, and the Philippines.

Not resting on their laurels, IRRI scientists are looking further into the complexity of water management, especially in Asia, where the problem is linked to poor irrigation system efficiency. More often than not, water is managed by an irrigation association. However, the lack of interface between the irrigation manager and farmers makes it difficult to use water efficiently.

To fill this interface gap, IRRI is working with its partners on automating irrigation scheduling and upgrading the AWD technology with support from the Bureau of Agricultural Research under the Philippine Department of Agriculture. AWD will have a cheap but accurate sensor that not only measures the water level inside the field tube but also improves the decision-making process on irrigation scheduling by transmitting the information via SMS to the farmer and irrigation manager. 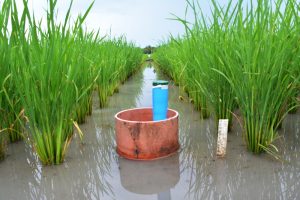 WITH ITS partners, IRRI is working on upgrading the AWD technology. (Photo: IRRI)

Automated AWD can make a farmer’s task of monitoring PVC tubes easier. Farmers need not go to their fields every other day just to check the water level in their PVC pipes. The farmers will appreciate this improvement because their fields are usually located at a distance from their homes. This improvement will bring ease to the irrigation manager, who will now have an idea of the water demand scenario of a group of farmers that varies from 3 to 50 members. Thus, automated AWD will link the decision maker (on irrigation) with the water user (farmers).

Improving decision making on water demand and precision farming. The institute is currently working on creating a system to obtain precise information on water demand and schedule, which will result in improving other aspects of crop management such as nutrient application and weed management. One of the ways to achieve this is to use unmanned aerial vehicles or drones for water management. The widespread availability of low-cost drones offers agricultural professionals a more cost-effective way of gathering information at the desired time interval. The use of a plant-based, real-time water demand indicator along with weather forecasting and growth simulation model can help in predicting water demand at different scales.

Reporting reduced carbon footprint
Interest in climate change and water conservation greatly increased after the 21st session of the UN Framework Convention on Climate Change (UNFCCC) Conference of the Parties (COP 21) in Paris in 2015 as well as the Water Summit in Doha in 2016. It was agreed during the COP 21 for all countries to report regularly on their emissions and their progress made in implementing and achieving their nationally determined contributions (NDCs), and to submit new NDCs every 5 years. The agricultural sector features prominently in the intended NDCs. Most countries (94%) include the agricultural sector in their mitigation and/or adaptation contributions, and many countries are targeting improved water management in rice to achieve the mitigation contributions.

With AWD’s proven track record in carbon footprint reduction of up to 35%, automated AWD will help gather precise large-scale information on water management and measure how much carbon footprint was reduced nationwide. What it takes to achieve the goal Knowing where the water scarcity problem lies, having evidence-based and appropriate water-saving technologies, along with a comprehensive water management plan that is tailor-made to specific areas, the institute can surely contribute to the food security and improvement of livelihood of rice farmers. From an economic point of view, it is hoped that farmers will reduce their irrigation input and cost while increasing their profits. When it comes to irrigation schemes, it is also a goal to make the distribution of water more equitable within the community.

“For policymakers and decision makers, these strategies will result in better water-investment planning that could result in model projects, on which a program and project developer can build, not only countrywide but in the whole of Southeast and South Asia,” said Dr. Bouman.

For Asia to sustain its economic growth, quality of life, and the social stability of its increasingly urban population, it will need to anchor its strategies for food security and a reliable supply of fresh water in the face of an increasing population and the changing climate. Surely, it will be easy to gain support for a research and development agenda that addresses three key factors to sustainability: the economic, environmental, and social aspects of water use efficiency in rice production.