Emmanuel Piñol, the new secretary of the Department of Agriculture, aims to achieve food security through the rapid and effective transfer of technologies to farmers, easy credit schemes for farmers, and efficient marketing of farm products. 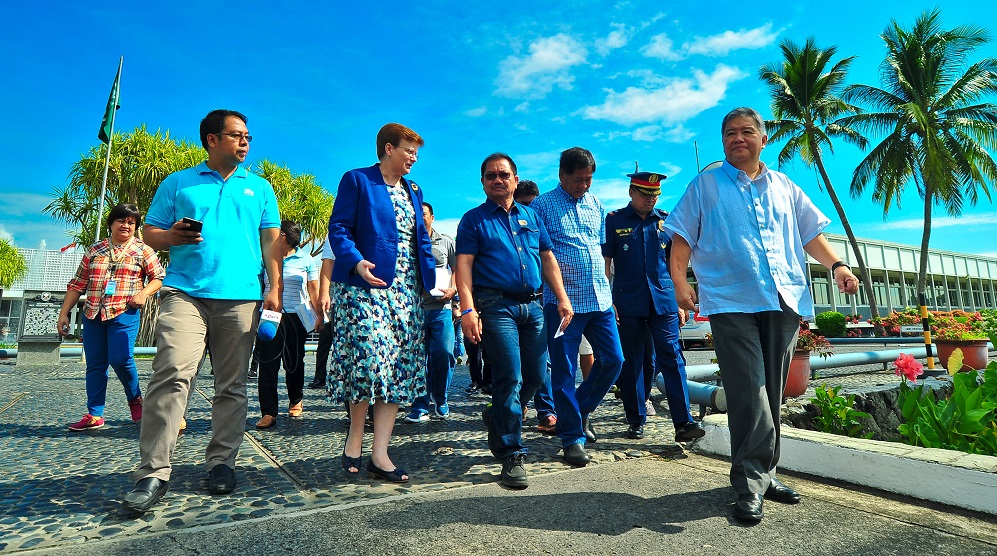 DR. Jacqueline Hughes (in blue blazer), IRRI’s deputy director general for research, briefs Secretary Piñol (center), on the institute’s research, technologies, rice varieties, and other products during his visit in May. Also in photo is Dr. Tolentino (extreme right).

In May, the Filipino people elected Rodrigo Duterte as the 16th president of the Philippines. Wildly popular, and often controversial, the tough-talking President ran on the campaign promise of “change is coming” to all aspects of the country’s affairs, including the agricultural sector.

Providing support services to small farmers to improve their productivity is part of the Duterte administration’s national economic plan to develop the rural areas. The new government aims to achieve rice self-sufficiency “within one to two years” by intensifying domestic production, according to statements made by Peter Laviña, the president’s spokesman, to Reuters.

The man President Duterte appointed to do the job is Emmanuel Piñol, the new secretary of the Department of Agriculture (DA). Secretary Piñol, a former provincial governor of Cotabato in Mindanao, calls himself a “hands-on farmer.”

“I know how to plow the field using a carabao, how to plant rice, and I breed chicken and goats,” he said in a DA media release. “I’ve been a local government official, I’ve been aware of the dreams and aspirations of the Filipino farmer.

The secretary believes that Filipino farmers could easily fill the 1.18 million tons of rice deficiency if all farms in the country increased their production by 1 ton per cropping season.

To achieve food security, part of Piñol’s strategy includes the rapid and effective transfer of technologies to farmers, easy credit schemes for farmers, and efficient marketing of farm products. He stressed that it would be the farmers themselves to decide what they need to improve their production.

“It will always be the farmers’ choice,” the secretary said. “What variety they want to plant, what fertilizers to use, and what equipment. We are just here to suggest and provide the assistance they need, following a sound assessment and validation.”

In July, Secretary Piñol visited the International Rice Research Institute (IRRI) for an overview of its research, technologies, rice varieties, and other products that could help make food available and affordable to all Filipinos and improve the lives of farmers. 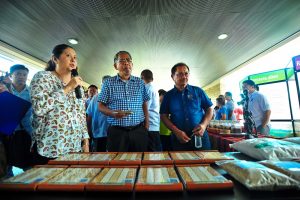 Dr.Georgina Vergara, Next-Gen Project lead, presents some of the modern varieties developed for the major rice ecosystems in the Philippines.

Feeding more Filipinos
With a new government in place, the Philippines seeks to ensure that food becomes more widely available and affordable to many families.

No country can realize its full potential—with its citizens being responsible and productive members of society—without having enough affordable and nutritious food. To make food more widely available and affordable, Secretary Piñol laid out his blueprint for achieving food security. The strategy came into fruition after realizing that many Filipino families still struggle to meet their day-to-day food needs.

Filipinos eat rice three times a day. A sharp increase in its price usually leaves most low-income families with little or no money left for meat, fish, or vegetables necessary for a healthy diet. Even with a modest population growth rate of 1.61% in 2015, the mission of feeding millions in the country is not without its challenges, especially considering its limited land area compared with its Asian neighbors.

Focus on farmer
Filipino farmers are not as globally competitive as farmers in other Asian countries because of higher production costs and having longer periods for transplanting and harvesting. But, they have an important role to play in ensuring that food becomes more widely available and affordable to most middle-income and low-income families.

During his visit to IRRI, Secretary Piñol was interested in bringing advances in rice production developed through IRRI’s research to the farmers “so we can focus on food production and poverty alleviation,” which is a cornerstone of President Rodrigo Duterte’s administration. (See Technology on display: A glimpse of Philippine agriculture’s future.)

“Technologies are useless unless they are in the hands of farmers,” said Secretary Piñol. 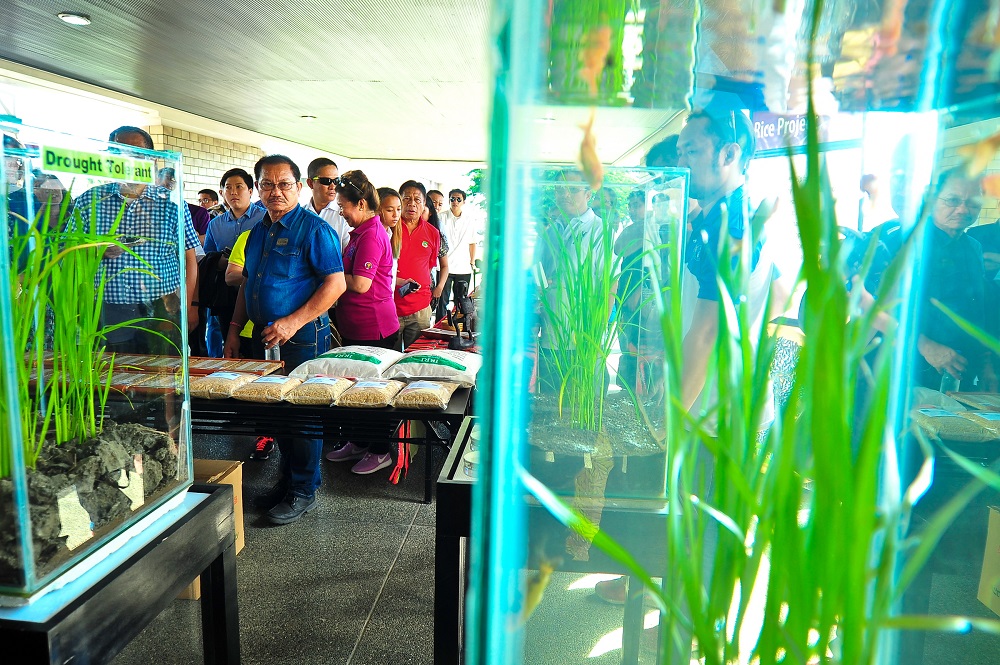 IRRI Deputy Director General for Communication and Partnerships Bruce Tolentino emphasized this as the reason why other Asian countries such as Thailand and Vietnam have made so much progress in rice production. Although IRRI and the University of the Philippines Los Baños—historically the most advanced agricultural institutions in Asia—are located in the country, the technologies being developed here are either not being used or are used by only a few.

“I can assure our partners in IRRI that your work will not go to waste,” said Secretary Piñol. “I would like to make sure that each advancement in technology would be translated into a better life for the Filipino farmer.”

New hope from heirloom rice
Among other things, Secretary Piñol is zooming in on the problems affecting the country’s upland areas. His experience as former governor of North Cotabato, one of the food baskets in Mindanao, brought him to the mountainous areas in his province, “where poverty is,” according to Secretary Piñol.

Most of the country’s uplands suffer from high incidence of poverty. Indigenous people that inhabit the uplands are among the poorest in the country, according to the International Fund for Agricultural Development (IFAD).

The roots of poverty in the uplands are complex. Subsistence-oriented agriculture with low productivity and profitability contributes to the situation. Small farm areas combined with unsustainable practices have led to the degradation of the highly fragile and vulnerable ecosystems of the uplands. IFAD reported that rural areas lag behind in economic growth and they have higher underemployment, partly because of less access to productive assets and business opportunities, and a lack of nonfarm income-generating activities and access to microfinance services and affordable credit. High illiteracy rates among the indigenous people and the encroachment of modern technology and cultures onto their traditional norms and practices aggravate the situation. 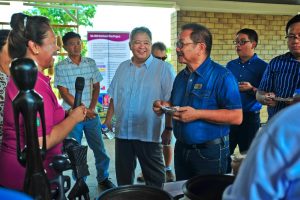 Dr. Casiana Vera Cruz , Dr. Tolentino, and Secretary Piñol discuss the role of traditional varieties in easing the poverty in the country’s highlands.

Traditional rice returns
In recent years, heirloom rice varieties have made a resurgence in the market. Under the Food Staples Sufficiency Program of the DA, IRRI works with the Philippine Rice Research Institute, the department’s regional field offices and local government units in the Cordilleras in northern Luzon and Region XII in Mindanao to help upland farmers conserve traditional rice varieties and link them with local and foreign markets.

“The Heirloom Rice Project not only helps preserve and promote Filipino cultural identity,” said Casiana Vera Cruz, the project leader. “It also aims to improve the quality of life of Filipino farmers economically and socially.”

The new agriculture chief, a farmer himself, sees the role of traditional rice varieties in helping improve the plight of upland farmers.

“Heirloom rice should be considered as a high-value crop.” Secretary Piñol said. “Tinawon is very saleable. They are selling it at four times the price of ordinary rice. If they could produce only a quarter of the production in the lowlands, they would be earning the same. What we intend to do is to develop these (traditional rice varieties) in the upland areas where the beneficiaries would be the indigenous peoples so that they could make more money.

Ms. Ferrer is science communication specialist and Mr. Serrano is a photographer at IRRI. Mr. Santiaguel is managing editor of Rice Today.