In spite of the significance of women as unpaid labor or as agricultural wage workers in rice production, postharvest, and processing, their contributions are often under-reported and have remained invisible in agricultural statistics. 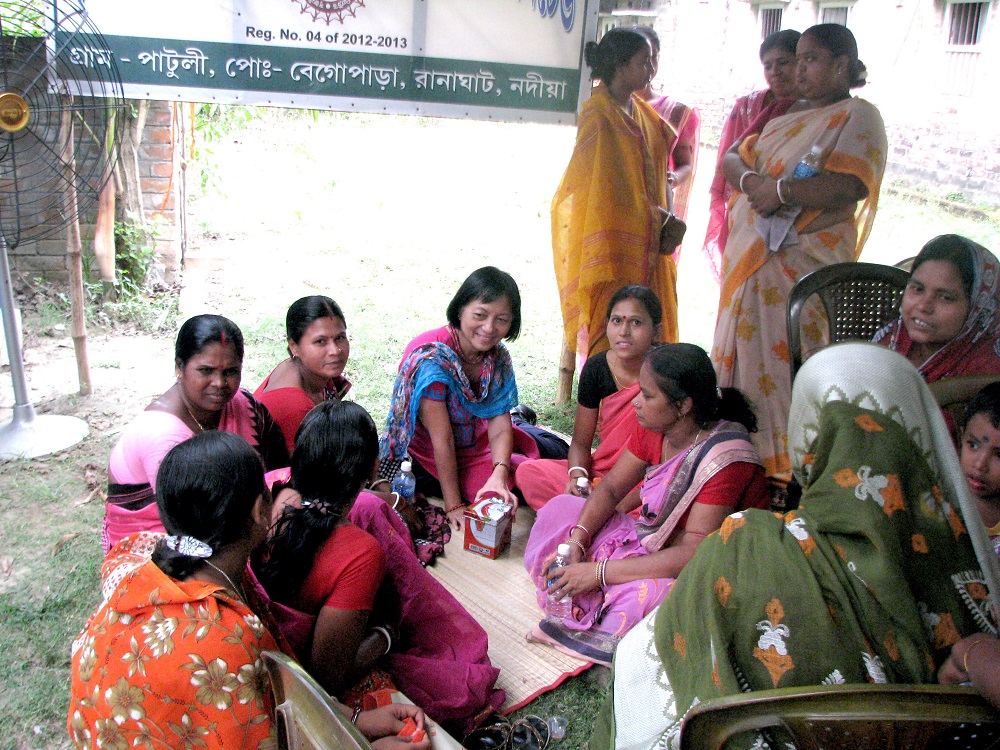 Rice is intertwined in the fabric of the lives of hundreds of millions of people living in rural areas in Asia and sub-Saharan Africa. Rice production provides staple food, livelihood, and income for poor rice-farming communities. Among poor rice-farming households, labor requirements are met by family members, male and female, and hired workers.

Gender relations and division of labor by gender vary by country, agroecosystem, socioeconomic status, cultural norms, degree of mechanization, market orientation (subsistence and commercialized), and availability of male labor. Women contribute at least half of total labor inputs in rice production in Asia and sub-Saharan Africa.

In spite of the significance of women as unpaid labor or as agricultural wage workers in rice production, postharvest, and processing, their contributions are often under-reported and have remained invisible in agricultural statistics. Consequently, the perception that “women are not farmers” has led to the exclusion of women in agricultural research-for- development programs. The “invisible” economic contributions of women as producers, farm managers, and income earners have been made visible through the collection of gender-disaggregated data in production and postharvest operations from baseline household surveys.

Identifying gender roles in specific operations and recognizing women-specific constraints, needs, and opportunities in rice value chains and in livestock management have revealed that women constitute a distinct category of consumers and potential beneficiaries of technologies. Therefore, rice and rice-related technologies will have an effect on their labor and income. In turn, the women can strongly influence the development and adoption of technologies, which affect their traditional roles and responsibilities.

In integrating women farmers in rice research and technology development, we should not exclude the men. Most of the leaders and research managers are men. Thus, it is only through the political will of these leaders that the traditional ways of conducting research will change so that support and opportunities can be provided for women in agricultural research-for-development programs.

We need to have more women in leadership positions and they should be represented more in research teams. Through the Global Rice Science Partnership (GRiSP), the Gender Research Team, in collaboration with the IRRI Training Center, has established the Leadership course for Asian and African women in rice research, development, and extension. Aside from this women-exclusive leadership course, IRRI is also organizing workshops and training activities for both male and female researchers to ensure that gender inequalities in access to technologies, resources, training, and agricultural information are addressed in each stage of research-for-development processes.

Promoting technologies through strong partnerships with national agricultural research and extension systems (NARES) and nongovernment organizations (NGOs)—particularly those that work with women self-help groups engaged in agriculture and in microcredit programs—have been found to be effective. This model will be expanded through ongoing country projects.

GRiSP partners have catalyzed the development and dissemination of rice technologies through several projects, including Stress-Tolerant Rice for Africa and South Asia (STRASA) and, more broadly, across these other major projects: Cereal Systems Initiative for South Asia, Consortium for Unfavorable Rice Environments, Irrigated Rice Research Consortium, and the CGIAR Research Program on Climate Change, Agriculture, and Food Security.

Despite these efforts, social and cultural barriers and traditional mindsets must change to better support women in rice production without causing disharmony within families. The stories in this report describe several strategies for weaving a gender dimension into current sociocultural environments. For example, sociocultural norms in Bangladesh and some parts of eastern India limit the mobility of women farmers to the confines of their homesteads. They are seldom allowed by their male “guardians” (i.e., husbands and senior relatives) to be consulted or interviewed. These norms restrict the women from achieving their potential economic contributions, which would benefit their families.

The Ashroy Foundation in Bangladesh, however, took an approach to convince men to allow women to participate in research-for-development projects. The Ashroy team conducted a series of meetings and personal consultations with husbands, religious leaders, and other influential people in the local community so that the women may be allowed for interviews and involvement in livelihood activities. This paved the way for development workers to train the women on production of high-quality grain and seed, other income generating activities, and improved postharvest practices.

In eastern India, the involvement of a female farmer in demonstration trials of Swarna-Sub1 inspired her to mobilize 200 female farmers to use the submergence-tolerant rice variety. Women’s roles as housewives also change to de facto farm managers when their husbands migrate elsewhere for long periods.

A woman in Bangladesh, after receiving training on postharvest management, began to grow the rice variety BINA dhan7 and influenced other farmers to grow the variety. Since the short-duration and high-yielding rice variety was introduced, farmers have been able to grow non-rice crops, such as mustard, between the aman- and boro-season rice crops, thus increasing their productivity and family income.

These examples show us that providing technologies alongside technical knowledge, through training programs, can empower women as leaders in disseminating technologies or as capacity builders for grassroots women.

Traditional seed distribution schemes are often aimed at men only. However, experience from tribal areas at Mayurbhanj in Odisha, India, reveal that the introduction of Sahbhagi dhan, a drought-tolerant and short-duration rice variety, convinced men and women to do seed trials and become seed growers. Because they needed to conserve seeds for the next season, the women established community seed banks. Growing Sahbhagi dhan allowed women to grow other vegetables after harvesting the rice.

Providing women direct access to stress-tolerant rice varieties and training on production of high-quality seeds, including storage techniques, are helping build their own resilience in adapting to extreme climate events such as drought, floods, and intrusion of seawater into farm lands. Similarly, the formation of women’s groups in Nepal has led to the successful establishment of women-managed community seed banks.

Women are gradually breaking their social and cultural confines. Under the STRASA project, women in India, Bangladesh, and Nepal have been participants in activities such as preference analysis, sensory evaluation, and farmer managed trials in participatory varietal selection. They are now empowered to select new varieties that meet their criteria. They are now also more confident in expressing their opinions on both good and bad traits of new varieties, based on their knowledge gains from participatory varietal selection. Having access to seeds also ensures that their storage bins are full until the next harvest season. Adoption of submergence-tolerant rice varieties, such as Swarna-Sub1, means they spend less time and effort in replanting seedlings. They use their freed time to take care of household chores, child care, and income-generating activities such as livestock-raising. Gender-inclusive participatory varietal selection is now replicated in rice varietal improvement projects for stress-prone rice environments.

In South Vietnam, women farmers are involved in spraying chemicals to control pests. Excessive use of pesticides can harm human health, including that of women and young children, and it can reduce profit and contribute to pest outbreaks. Involving women was one strategy identified to break the reliance on pesticides. Women farmers underwent training in ecological engineering, which encouraged them to grow nectar-producing flowers around paddy fields to attract bees and other beneficial insects that prey on insects that attack rice plants. The women reported a significant change in their beliefs and practices as a result.

In Nepal, the drudgery of weeding is mainly a woman’s concern. The women thus welcomed the introduction of labor-saving implements, equipment, and improved agronomic practices that lighten their labor and lessen the time they spend weeding. 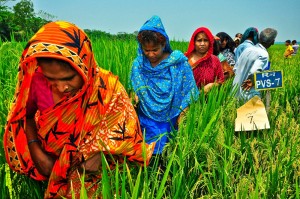 Working with women farmers’ groups has proven more effective than working with individual women farmers. In Burundi, IRRI started to work with 10 groups of ex-combatant women from the civil war by getting each group one hectare of the best-irrigated land in the country and showing them how to grow rice. These women received unprecedented access to farm land, farm inputs, and training to produce rice and are now building better livelihoods for themselves, their families, and communities. IRRI researchers taught the women to produce rice while NGOs provided vocational training and psychosocial support to help the women reintegrate into society. In Senegal, packaging and branding of rice helped a women’s group increase the competitiveness of local rice in the domestic rice market.

These are but a few stories from experiences on the ground that demonstrate how targeting women in rice research for development can reduce gender disparities in access to technology and training and, eventually, improve the lives of poor women farmers. These stories show us that women, as farmers, can contribute as well as benefit from GRiSP products (e.g., stress-tolerant rice varieties and improved crop management practices, including seed production, postharvest, and processing technologies) and capacity enhancement projects.

Under GRiSP, these mainstreaming strategies are being replicated and expanded in similar environments in collaboration with various partners. Understanding gender roles in the rice value chains and recognizing women’s perspectives in technology and dissemination processes matter. This understanding will be crucial in achieving the goals of reducing poverty and ensuring food and nutrition security, while protecting the environment, for thousands of poor rice-farming households living in unfavorable rice environments.