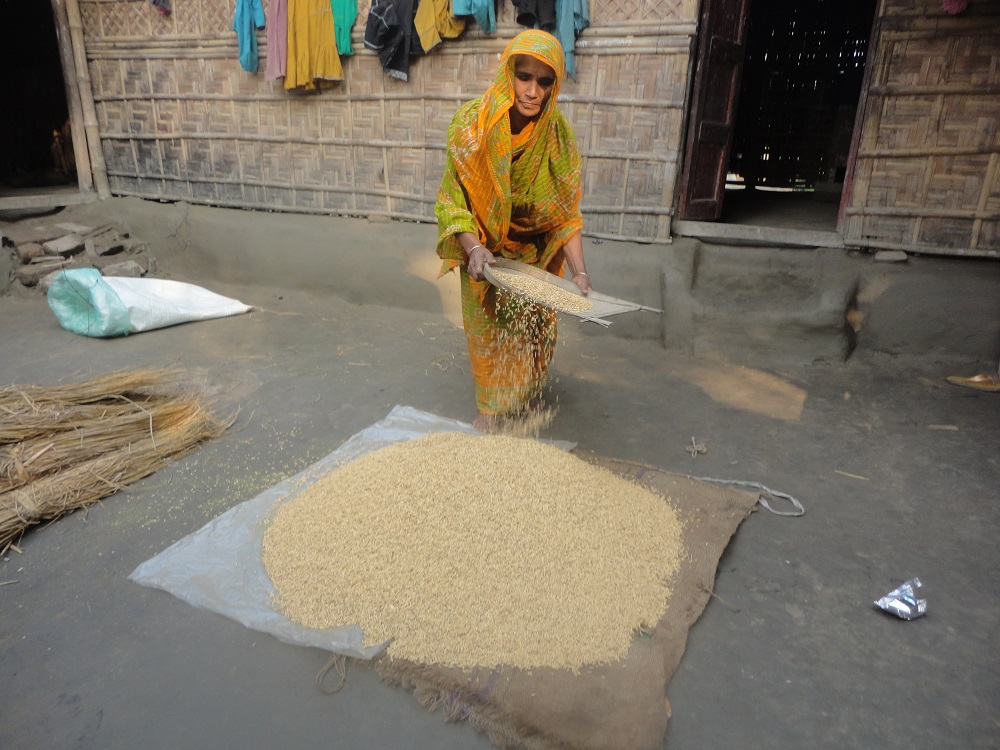 Across a wide range of cultures, widows and unmarried women often make up the most marginalized group. Despite the loss of her social status and her reduced economic circumstances, one widow gains empowerment through modern farming technologies. (Photo: GRiSP)

Fatema Begum is a 55-year-old widow who lives in a rural village in Bangladesh. In South Asian culture, the social stigma attached to widowhood makes women “invisible.” Without a man, it is not unusual for a woman to have little to no recognition or standing in the community.

Challenging fate
But Fatema chose to change the fate that awaited her after her husband’s death.

“I became actively involved in managing my farm land since my son migrated to Dhaka to find work,” she said. Fatema’s farm is a small piece of land, about a quarter of a hectare, on which she cultivated only rice and tobacco.

Fatema joined the rice production training offered by the Cereal Systems Initiative for South Asia (CSISA) in Bangladesh. Through Research Initiatives Bangladesh (one of CSISA’s nonprofit partners), Fatema gained access to modern varieties of rice and other crops and learned how to maximize the returns from her land through various cropping systems.

From surviving to thriving
During the 2011 wet season, after her training, she planted BINA dhan7, a high-yielding and early-maturing rice variety that can be harvested in only about 115 days, from seeds provided by CSISA. She direct-seeded rice using a tiller-operated seeder, which greatly minimizes the labor requirement for producing rice.

Although it was the first time she tested her new know-how, her efforts paid off. “With BINA dhan7 seeds and improved crop management practices, I increased my rice production,” she said.

She harvested 1,040 kilograms of rice from her field. What’s more impressive is that her bumper harvest came during monga, the period when other rice varieties are still maturing in the field, leaving farmers with no income and vulnerable to food shortage.

By planting early-maturing rice, Fatima not only improved her food security, but she had enough rice to give to her neighbors and relatives during monga. This enterprising widow also makes extra income from selling rice straw as fodder. 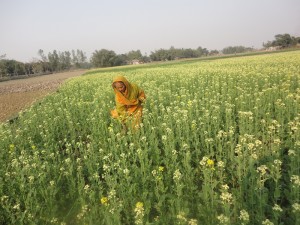 Women like Fatema Begum, a widow from a rural village in Bangladesh, now have access to new rice varieties and other crops. (Photo: GRiSP)

Diversifying her stock
“I also cultivated other crops like wheat, mustard, maize, and jute, which improved my family’s livelihood,” said Fatema.

Seed of change
“I also received training on seed production and improved storage techniques, like IRRI Super Bags,” she added. “I learned the best technique for producing high-quality seeds. I kept my own seeds, and the extra seeds I sold or lent to neighboring farmers.”

In 2012, Fatema was named best farmer from the Rangpur hub by IRRI and CSISA at the International Women’s Day for her extraordinary achievements. But perhaps her most inspiring feat was becoming a pioneer farmer and an agent of change in her village. Her success captured the attention of many farmers, and she provided productivity training to 25 of them.

“A number of farmers came to me for good-quality seeds and also asked for my advice,” Fatema said. “I am now transferring these techniques and skills to my neighbors.”

Widow with a future
Thousands of women in South Asia fear widowhood perhaps as much as their own mortality. Apart from dealing with the loss of a husband, it often means facing a bleak future burdened with many disadvantages and stigmas. But, Fatema proved that widows can own their future.

Fatema Begum refused to be swept under the rug and be forgotten. She knows her fate is tied to the ownership and productivity of her land and she has taken steps to protect it. She is proof that there is life in widowhood.