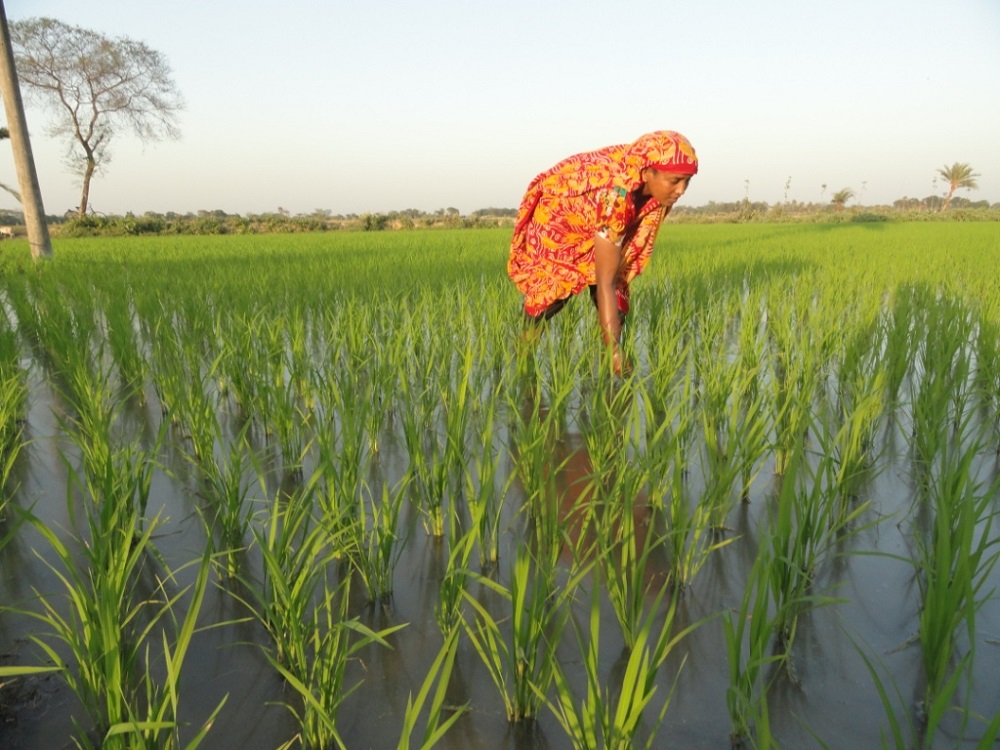 Rural women in Bangladesh are responsible for most of the hard work in and around the homestead, yet their work is seldom recognized as part of agriculture. But a woman from a small village in Bangladesh is proving that she is capable of contributing to household food security through improved farming practices. (Photo: GRiSP)

Selina Akter lives in Sajiali Village of Jessore Sadar in Bangladesh. Like most women in her village, she was involved in some agricultural production activities— from seed selection to harvesting and storage—and in managing livestock. Despite their contributions, local women depend heavily on their husbands (or other adult male family members) because the men make all the decisions in any income-generating activity. In 2011, however, Selina’s role changed.

Early that year, Selina’s husband, Mohammad Yarab Ali, decided to migrate to a nearby town to work as a laborer. Her husband’s decision, although not easy, was necessary. The income from their small farm was so scant they could hardly afford to eat three meals a day. The couple has a son who is in college, and they were determined to see him graduate despite the high cost of education. When her husband left their family farm to work, Selina stepped up to responsibilities that were new to women like her. She became the sole decision-maker in agriculture matters.

A season for change
Every year, Yarab planted the Swarna rice variety during the aman, or wet, season (July to October) on the land they owned, which was a fifth of a hectare in size. He harvested 1.1 tons (or 5.5 tons/hectare) on average, which is a good yield, but Swarna is a late-maturing rice variety that takes 150 days before the grains can be harvested, thus allowing only two rice crops a year. Using the late-maturing Swarna not only limited their production, but it also meant they had no source of additional income between the aman and boro (dry) seasons.

A few months after Yarab left, Selina signed up for a rice-based farming system training program conducted by the Cereal Systems Initiative for South Asia (CSISA) and the International Rice Research Institute (IRRI), upon the advice of Joti, a nongovernment organization and CSISA partner.

From her new knowledge, Selina decided to grow BINA dhan7, a short-duration rice variety that took only 109 days from sowing to harvest, on a portion of their land, in addition to the Swarna during the 2011 aman season. While waiting for her main crop of Swarna to ripen, she harvested BINA dhan7 and sold more than 75% of it for a price higher than that of Swarna paddy because of better grain quality and early (off-season) availability.

More than a rice farmer
After harvesting BINA dhan7, Selina cultivated mustard (BARI Sarisha15) on that portion of the land and harvested 40 kilograms of mustard seed, some of which she sold. In the following boro season (December to May), she planted BRRI dhan28, another early-maturing rice variety that can potentially yield 6 tons per hectare. She also used rice straw and mustard residue to feed their cattle, which meant more savings for her household.

Selina also underwent training on postharvest management and learned about proper storage of rice seeds. From her first harvest of BINA dhan7, she stored 50 kilograms of seeds using an IRRI Super Bag provided by CSISA. This protected the seeds from moisture, mold, and pests and kept the seeds viable for up to a year. 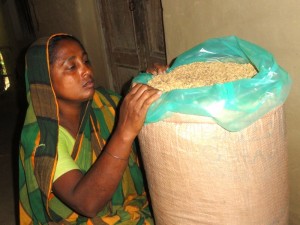 Sowing her seeds
In the aman season of 2012, Selina planted BINA dhan7 again, this time on her entire farmland—one-fifth of a hectare—using her saved seeds. Because she practiced proper seed storage, the germination rate from her rice seeds was more than 80%, indicating good seed vigor and healthier seedlings. Robust seedlings grow faster, have better root growth to absorb nutrients more efficiently from the soil, and produce higher yields.

Selina was very happy to have joined CSISA’s rice production program. Since adopting new rice varieties and technologies, her farm has become more productive. And, like the vigorous BINA dhan7 rice seeds that she grew from her land, her success as a farmer took root in the consciousness of other farmers in her village.

Twenty farmers took Selina’s advice and shifted to short-duration rice varieties. To increase their income, they also planted non-rice crops, such as mustard, between the aman and boro rice crops. In the next aman season, she hopes that the number of farmers to adopt short-duration rice will double in the neighboring village so that they, too, can increase their productivity and family income.

Family and financial circumstances gave Selina Akter an opportunity to step out of her traditional housewife role. With the right training, she demonstrated the extent of what a woman can potentially contribute to others in her village. She is now a successful farmer who helps lead other farmers to a better future.