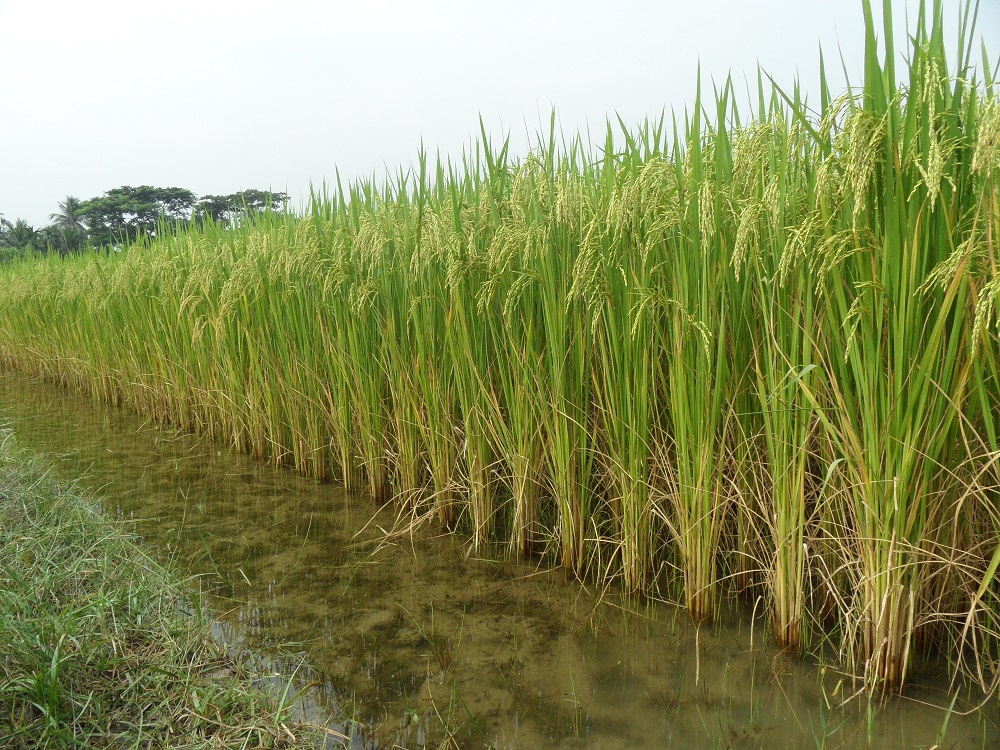 Swarna-Sub1 not only helps farmers in the low-lying areas of South Asia cope with floods. For women farmers, the flood-tolerant rice variety reduces their work burden and gives them more time for other activities. (Photo: GRiSP)

Swarna-Sub1—also called “scuba rice” because of its ability to survive underwater for up to two weeks—has been a dramatic success story in the flood-prone areas of South Asia. While yield levels of other varieties are drastically reduced by flooding, Swarna-Sub1 is able to produce up to 6 tons per hectare.

Fields of sorrow
Indrawati Yadav, from Dubripur Village of Siddharthnagar in eastern Uttar Pradesh, is a woman who is both a farmer and, by tradition, the caregiver in her household. She tills land that lies in the path of flash floods every year, damaging most of her rice crop and leaving her with not much grain to harvest. Indrawati and many women farmers like her are helpless in dealing with the elements. They are vulnerable to food scarcity and become unable to support their families.

Keeping hope afloat
Things started to turn for the better when Yadav’s husband bought 8 kilograms of Swarna-Sub1 seeds from a government store. She and other women members of her family planted the seeds on her farm, a quarter of a hectare in size. 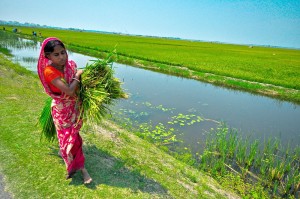 “Swarna-Sub1 is good for the lowlands, which are submerged several times during the monsoon season every year,” said Indrawati. “In our area, most farming households now grow this variety because it yields more and is tolerant of flooding.”

Where rice production was previously very unstable, she now has enough rice for her family’s needs throughout the year and extra money from selling some of her produce.

“It is more profitable for marginal farmers like me to grow this variety,” Indrawati added. “We can recover our expenses on inputs and labor even after a flood.“

Swarna-Sub1, which is also less susceptible to diseases, can be harvested in about 130 days after planting. “There is time to grow wheat and other crops in the following season, so we have more food and income for our families,” she said.

Fewer labor pains
“Women used to have to replant the field after a flood. Now we don’t have to,” Indrawati said. In addition to household and farm work, the women also manage the livestock. They milk the dairy animals, clean the livestock sheds, and collect animal manure for household fuel or fertilizer. Every day, the women collect rice straw and wheat chaff for fodder while the animals graze in the open fields.

Like a blessing, Swarna-Sub1 has helped ease the work of women farmers. “The quality of its rice straw makes for good fodder for our livestock,” she said. “We don’t need to walk long distances to look for straw.”

Because Swarna-Sub1 is of medium height, it is easier to thresh. “We spend less time now threshing rice, which leaves us more time to take care of our children,” Indrawati said. With less farming chores, she and the other women also find time to make mats and other handicrafts for household use, instead of buying the items. They can also sell extra items for additional income.

As more men migrate to the cities to find jobs, the women are left behind to tend the farm. Not surprisingly, they are doing quite well in their new found function.