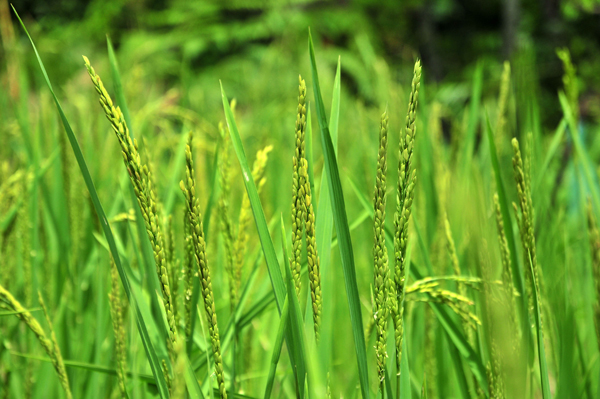 Rice is the most important staple food for more than half the planet’s population, particularly for the poor of Asia. World rice yield, herein called farm yield (FY), is currently increasing constantly at only 1% per year relative to the 2010 global average yield of 4.3 tons per hectare.

To understand yield prospects to 2050, when the number of rice eaters will be more than ever, FY must be disaggregated into the key rice-growing regions and underlying yield drivers. For the latter, we define potential yield (PY) as the yield obtained, usually in breeders’ plots grown across the region of interest, with the best-yielding new varieties and without biotic stresses such as diseases and pests, and abiotic stresses such as drought, flooding, salinity, heat, and cold. The PY to FY difference is the yield gap, which is expressed as a percentage of FY. With risk and economics being considered, a minimum yield gap of no less than 30% can be met by the best farmers. FY progress arises from an increase in PY and closure of the yield gap.

For each of the world’s seven major rice mega-environments, 13 recent case studies were used to explore FY, PY, and the yield gap over the past 20–30 years. The FY increase was significant in all situations and ranged from 0.2% to 2.2% per year. The current rates for PY progress (and also of water-limited PY, one case) were also all significant, ranging from 0.6% to 1.3% per year, with an average of 0.8%. By difference, the rate of yield gap closing varied from as high as 1.5% per year to -0.6% per year (i.e., widening not closing) for an average closing of 0.4% per year.

The sample average yield gap for rice was 76% but the range was large (25% to 150%) with a smaller gap for irrigated rice (57%) than for rainfed rice (123%). These results show that it is important to continually lift PY for future FY progress, especially with irrigated rice, which contributes to about 80% of world production. The results also point to the generally slow rates of yield gap closing, but gap closing cannot be neglected as it often targets the poorest producers.

Yield gaps in rice are inevitably due to many agronomic constraints, poor farmer knowledge, and weak rural infrastructure and institutions. Some constraints can be alleviated with targeted agronomic research and breeding for better stress resistance, which is beginning to show promise and is also likely to benefit from genetic engineering (GE).

In Brazil’s irrigated rice region, yield gap closing is impressive (1.3% per year) because farmers, and the public and private sectors are highly involved in technology transfer. Similar concerted efforts, which target all players and are accompanied by rural development, will likely deliver substantial yield gap closing. However, the shrinking size of Asian rice farms and their weak human resource base pose a special challenge.

Lifting the rate of PY progress will be more difficult, as the harvest index is above 0.5 in the best materials around the world and is unlikely to increase much more. Studies in Japan suggest that recent breeding progress in PY has increased leaf photosynthetic rate around panicle emergence, and there may be scope to further exploit natural variation in photosynthetic traits as rice genetic resources are explored. We don’t expect GE (e.g., C4 rice) to lift PY at least for several decades. Hybrid rice from tropical areas will likely give a one-off boost to PY by 10–20% over the next decade or so. And this has not been considered in the rate of PY progress.

To 2050, any negative effects arising from temperature rise driven by climate change are likely to be balanced by the benefit of rising CO2 for crop photosynthesis. The substantial global warming effect of methane from paddy rice and the inefficiencies in water and nitrogen use and the tendency for pesticide overuse in rice cropping are weaknesses to be overcome. This will need substantial research and much improved crop management if rice production is to be sustainably intensified globally. However, the greatest potential environmental impact arises from further land clearing for any type of cropping.

Lifting rice FY progress to more than 1% per year will likely be needed to eliminate direct or indirect pressure for land clearing for rice. But, this will be difficult and will require more substantial investment in R&D and in rural development generally.
_______________________________
Dr. Fischer, a former member of IRRI’s Board of Trustees (2005-10), is an honorary research fellow at Australia’s Commonwealth Scientific and Industrial Research Organisation. More details on yields for rice and a host of other important crops can be found in his just released book Crop yields and global food security—will yield increase continue to feed the world?