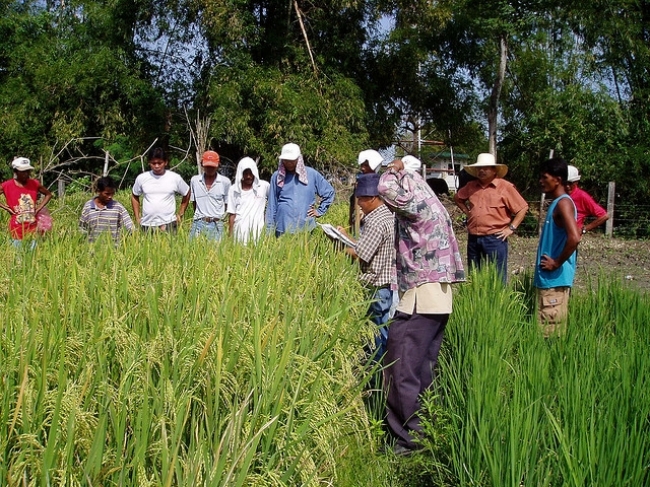 It is difficult to find an image of rice farming that is not, figuratively speaking, all wet. Pictures of green paddies with sun glinting off dark water, or of farmers plowing muddy fields with water buffalo, are bound up with our mental image of rice production.

But the irrigation water on which this picture depends is starting to run critically short. About half of all the fresh water used in Asia supports irrigated agriculture. An astonishing 90% of this flows straight into rice paddies. This already unsustainable situation is now combined with rapidly rising water demand from Asia’s booming industrial sector and fast-growing cities, as well as frequent droughts. Competition for water is intensifying and, if nothing changes, will soon be out of control.

The Indian state of Tamil Nadu, for example, once farmed around 2 million hectares of rice. In 2002 and 2003, drought reduced the area of irrigated rice production to less than 300,000 hectares, and is inciting a dispute over water allocation with neighboring Karnataka. Problems like this are only getting worse —more than 12 million hectares of irrigated rice lands in South Asia alone are likely to face severe  water shortage within 20 years.

In the face of this looming crisis, researchers in several countries are imagining a different picture for some of Asia’s rice fields. In their vision of the future, rice crops, rather than standing in water, are grown in dry fields, like maize or soybeans.

But how to create such a rice crop? Part of the solution has existed for thousands of years. Traditional upland rice varieties have been selected over hundreds of generations for their ability to grow in free-draining, “aerobic,” or oxygenated—as opposed to flooded—soil conditions.

But these varieties help solve only part of the problem. Although they are deep-rooted and tolerant of drought, desirable traits in any rice variety designed for dry soils, they also suffer from low yields. Even with ample water and fertile soils, traditional upland varieties rarely yield more than 3 tons per hectare, and often produce less than half that in farmers’ fields. Farmers of irrigated (lowland) rice regularly achieve yields of 5–8 tons per hectare. And, in fertile environments, upland rice is prone to lodging (falling over) under the weight of its own grain.

Rice breeders at the International Rice Research Institute (IRRI) want this to change. They are developing new varieties that combine upland rice’s adaptation to dry soils with the fertilizer responsiveness and yield potential of modern high-yielding varieties.