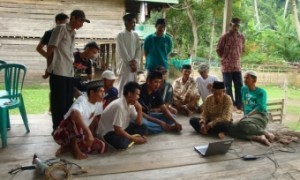 Farmers from Bone, South Sulawesi, watch a video on direct seeding using a drum seeder. The video was made by farmers in Southeast Sulawesi. (Photo: Trina Leah Mendoza, IRRI)

Cool and collected, Pak (short for an Indonesian word Bapak, which means father or mister) Darwis, a 56-year-old Indonesian farmer from Bone District, South Sulawesi, waits for his signal. When he hears “action!,” he begins talking animatedly in his local dialect. He stresses his words carefully; his eyes are expressive. Facing the video camera, he shows how to make a water tube—a tool that monitors water levels in the rice field for alternate wetting and drying (AWD), a water-saving method developed by the International Rice Research Institute (IRRI). The small audience watching the shoot is silent, mesmerized, and in awe of his confidence and knowledge.

Pak Darwis is one of the farmers who have adopted AWD and other rice-growing technologies introduced by IRRI’s Irrigated Rice Research Consortium (IRRC). The 2008-11 project, funded by the Australian Centre for International Agricultural Research, increased farmer-adopters’ incomes by an average of US$207 per season per hectare in South and Southeast Sulawesi.

Pak Darwis, a farmer from Bone, South Sulawesi, demonstrates how to make a field water tube to monitor water levels in the field. (Photo: Donna Casimero)

In January 2011, the IRRC learned about participatory videos being produced by Digital Green, an organization based in India, which aims to raise the livelihoods of smallholder farmers through targeted production and dissemination of agricultural information via participatory video and mediated instruction. “Participatory video is a powerful tool because it is both engaging and expressive,” says Rikin Gandhi, Digital Green chief executive officer. “We use information and communication technology to amplify the effectiveness of agricultural extension systems around the world.”

Using their approach, short learning videos that capture new or improved agricultural technologies and practices are created by farmers, for farmers. These videos, available on the Digital Green Web site, are shared among similar communities through facilitated discussion.

To capture farmers’ success stories on video, the IRRC tested this approach in July 2011. Armed with camcorders and knowledge of Digital Green’s standard operating procedures, IRRC scientist Donna Casimero, communication specialist Rona Rojas, and I flew to Konawe District, Southeast Sulawesi, to take on the challenge.

Four farmers who have adopted direct-seeding technology developed the storyboard. This was done with guidance from Dr. Casimero and staff from the Assessment Institute for Agricultural Technology (AIAT) of Southeast Sulawesi.

The storyboard includes why farmers chose direct seeding using a drum seeder; how they prepare seeds, manage weeds, and use the drum seeder; and how their lives have changed after direct seeding. These storyboards do not contain fabricated dialogue and are used to accurately guide farmers in discussing their views.

Pak Andi Caco and Tahir were a bit nervous at the start of the shoot, but, after some time in front of the camera, they became comfortable and confident in sharing their experiences and benefits from the technologies. Most, if not all, interviews were done in one take. Pak Caco showed the original IRRI drum seeder with six drums and explained that he altered it by removing two drums so that it would be lighter and easier to pull in their field. The next day, the farmers demonstrated direct seeding, land leveling, weed management, and herbicide spraying while Rona and I captured these activities on camera.

“Now that we are direct seeding, we do not need to hire many people to transplant or spend a lot on transplanting,” shares Tahir. “Now, we need only one person to directly seed 1 hectare.”

“I used the income from the paddy fields and rice mill that I bought to send my children to school,” adds Pak Caco. “Our life is much better than when we first came to this place.”

Gaining reviews
In January 2012, Dr. Casimero and I returned to Southeast Sulawesi with the draft video to get farmers’ feedback. About 20 farmers, including some women, enjoyed it and were able to remember its messages afterward. They discussed it among themselves every so often and were delighted to see their peers on screen. To improve the video, they suggested including graphics showing the economic benefits of direct seeding.

The 13-minute video, arguably long by industry standards, was still too short for them. They suggested other video topics leading to postharvest. They are eager for farmers in other areas to see their video.

The IRRC team did just that and traveled 5 hours from Makassar City over mountains and fields to show the video to farmers in Bone, South Sulawesi. Although farmers in that area did not practice direct seeding, they enjoyed the video and found other farmers telling their stories convincingly.

Take two
Inspired by the positive feedback on the direct-seeding video, the IRRC team developed two more videos on site-specific nutrient management in Southeast Sulawesi and AWD in South Sulawesi.

This time, farmers Mulyadi and Mappa were more nervous in front of the camera, so the AIAT facilitators had to rephrase their questions and help them once in a while to relax and think of the interview as a conversation with friends.

As expected, Mulyadi was more at ease in the field when he described and demonstrated his fertilizer applications.

“After attending the farmers’ field school at IRRI in collaboration with AIAT, we now practice appropriate and balanced fertilization on our farm,” explains Mulyadi. His yield increased and his family was able to move out of its rented house and build a small house.

Mappa was also able to build a small house with his increased yield, and was able to support his wife’s pilgrimage to the Holy Land.

Over in Bone, South Sulawesi, Pak Darwis and Beddu Rahman were in charge of the show. It was easy for them to create the storyboard and identify the activities and topics they wanted to include in the video. They needed little guidance. During the shoot, they were confident, relaxed, and spontaneous in front of the camera.

“This method is very useful; production has increased 20–30% because the farm is not too flooded,” says Pak Darwis.

“The advantages of applying AWD include efficient water use, an increase in cultivation area, and synchronous planting during the dry season,” adds Pak Beddu Rahman, “The farmers are thankful because of this method.”

Handing over the reins
Dr. Casimero believes that the AIAT staff and farmers were empowered as they gained skills and confidence in storyboarding, interviewing, and talking in front of the camera. “Simple techniques in video shooting and editing can be taught to them, so that they can sustain this approach and truly have impact,” she says.

Bas Bouman, a water scientist and new director of the Global Rice Science Partnership (GRiSP), sums up the Digital Green experience perfectly: “In our ‘regular’ video productions, we are used to being fully in charge, from script to images, down to word-for-word text; we control the message, content, and everything. With the Digital Green approach, the farmers are actually in control! They highlight benefits and pros and cons in their own way, using their own experience and their own particular settings.”