Sentinel-1A, a radar imaging satellite, is an important tool for rice mapping and monitoring. It can provide detailed information on Asia’s rice crop, such as planted area, seasonality, cropping intensity, and damaged area due to floods or drought, as well as information on rice crop growth. 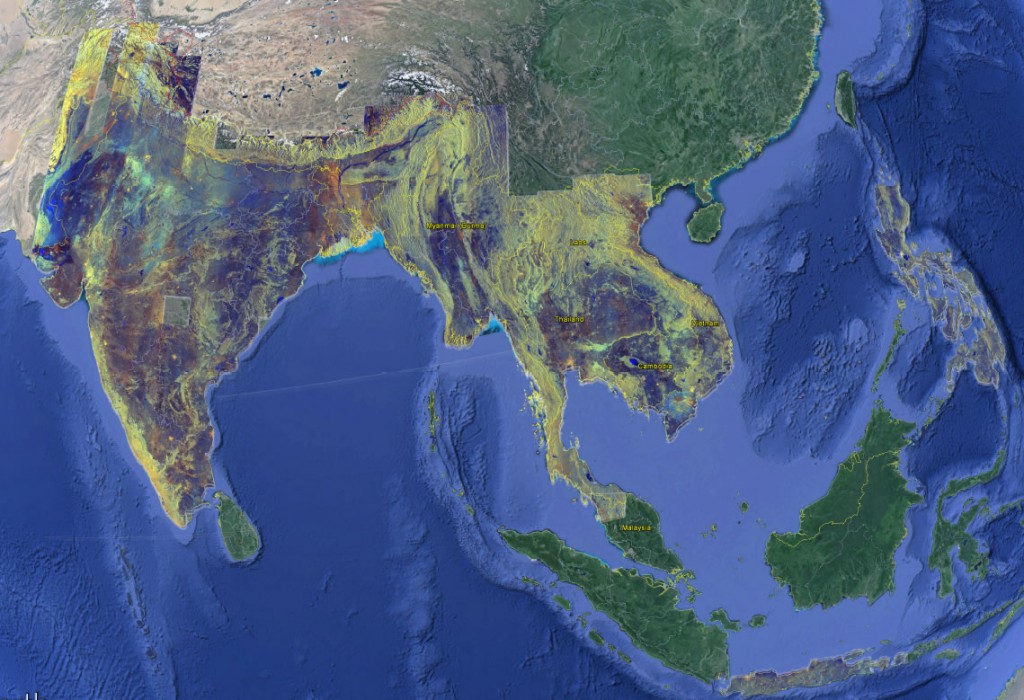 The International Rice Research Institute (IRRI) and its partners use remote sensing imagery from satellites to generate information on the rice crop, such as planted area, seasonality, cropping intensity, and damaged area due to floods or drought. Information on crop growth from such imagery can also be used with crop growth simulation models to estimate yield.

In recent years, we have been working with partners across Asia to develop and test methods for mapping rice using Synthetic Aperture Radar (SAR) imagery. SAR is particularly suited for rice crop mapping and monitoring because of the unique temporal signature of lowland rice, which can be extracted from multiple SAR images throughout the season. SAR systems can penetrate through clouds, which is an additional factor in their favor, since most rice in Asia is grown in the cloudy monsoon season that makes remote sensing with optical imagery challenging.

To date, our work has been limited to pilot sites because of both the complexity and cost of obtaining and processing SAR images. However, a long-standing collaboration with sarmap has solved the “complexity” part of the problem through the development of automated processing chains, which can be run locally or hosted on cloud-computing facilities.

The “cost” part also changed recently with the launch of the European Space Agency’s (ESA) Sentinel-1A satellite in 2014. Sentinel-1A will become a major source of SAR imagery from 2015 onwards. Sentinel-1A data are freely available and will cover much of the rice-growing areas of Asia, with a spatial resolution of 20 meters. Sentinel-1A will be joined by Sentinel-1B, which is scheduled for launch in 2016 or 2017.  The two-satellite system will shorten the potential revisit time to 6 days, thus enhancing the ability to regularly monitor the crop and improving the detection capabilities through the use of interferometric correlation (coherence).

To show the potential of the Sentinel program, sarmap and IRRI have generated mosaics composed of  many Sentinel-1A images that cover 7 million square kilometers of South and Southeast Asia. The mosaics are composed of images taken in February and March 2015. These cloud-free mosaics show the value of SAR imagery for detailed monitoring of agriculture and natural resources across Asia.

SAR imagery must be interpreted differently from imagery seen in Google Maps and other mapping services. In these mosaics, we have processed the images, in which dark blue represents water or other flat surfaces (such as airport runways), orange and white represent built-up areas and human settlements, light blue represents bare soil, and brown and green show vegetation at different growth stages. The mosaics are a snapshot of Earth’s surface, and have not been interpreted for rice mapping purposes.

Sentinel-1A will continue to acquire images over the region, and these images will become increasingly useful as they reveal the progress of the rice crop over time, season after season. The ESA Sentinel program has a big role to play in the future of satellite-based remote sensing for rice crop applications.