The extent of rainfall disruption in El Niño watch countries—India, Indonesia, and the Philippines—could affect the rice market in late 2015 as Thai rice stocks battle to keep the market in check. 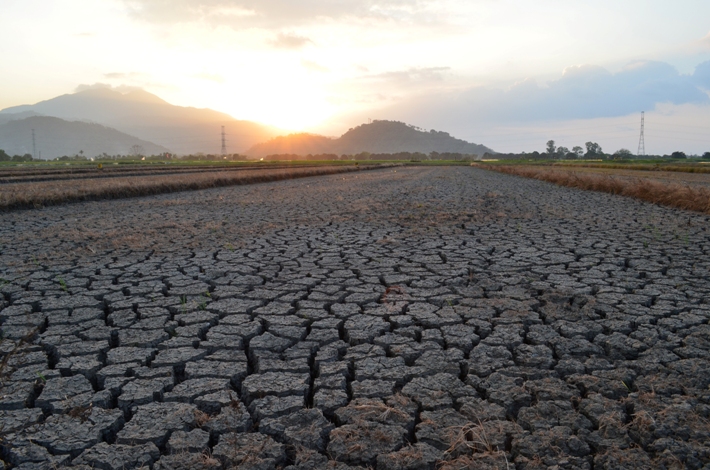 The above-normal rainfall during June in India forecast to be one of the hardest-hit countries along with Indonesia and the Philippines, has definitely put the fear of El Niño on the back burner. The global rice market has more or less ignored these predictions in the past few months because of surplus rice in Thailand and other key exporters. Last year’s forecast miss of a probable El Niño has also been playing in the minds of many in the rice market.

The kharif (monsoon) planting in India has been surging ahead on the back of good pre-monsoon rainfall in April and May and 16% above-normal monsoon rain in June. As of 3 July 2015, the planting of all field crops has been ahead of schedule, except that of paddy because monsoon arrived late in Bihar and Uttar Pradesh. July and August are still key months in terms of paddy transplanting in the majority of rainfed regions of Eastern and Central India. There have already been indications of patchy rainfall in the past 10 days (last week of June and first week of July) in many parts of India. The Indian Meteorological Department now forecasts 8–10% deficit rainfall in July and August. If the deficit occurs in the irrigated belt of Northwest India, then the impact will be minimal. However, deficit rainfall in Eastern and Central India could have an adverse impact on the size of the rice crop.

Unlike in India, El Niño-induced drought in other Asian countries has already affected the rice crop. Thai authorities recently lowered the estimate of the 2015 main paddy crop by around 2.5 million tons (10%). Similarly, in the Philippines, below-average rainfall in the past 2 months may have delayed planting and reduced sowing of the just-completed main rice crop for the rainfed region (FAO GIEWS country brief for the Philippines, 15 June 2015). The rainfall in the next few weeks will be critical in determining the size of the rice crop in the Philippines. In Indonesia, the main rice crop season, which is 95% of the annual production, starts in November and planting continues until January. The possibility of El Niño in those months will be critical for the 2016 main rice crop in Indonesia. 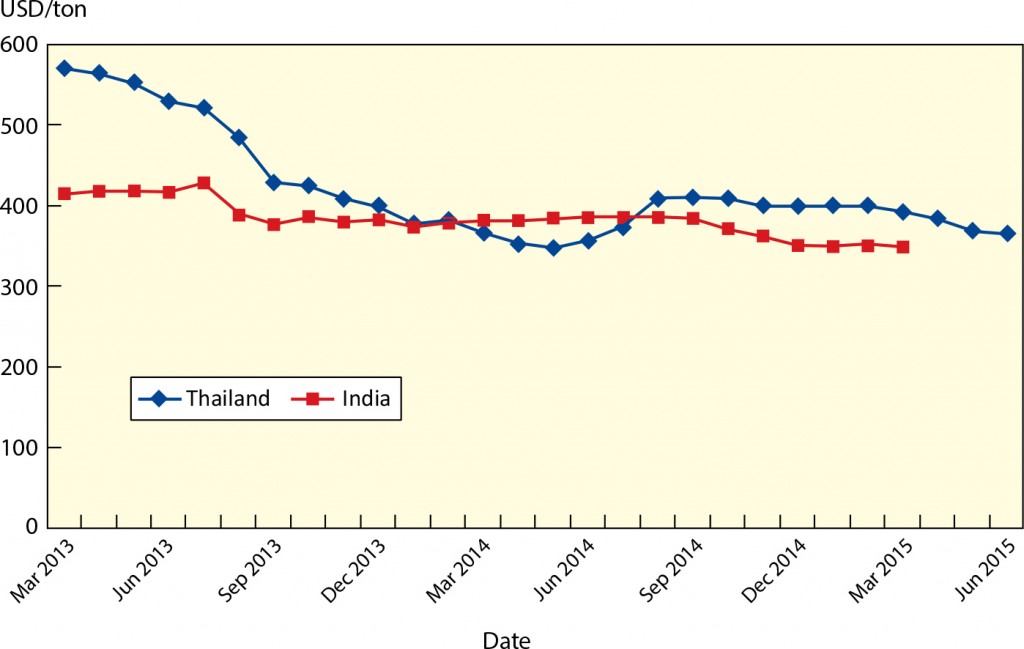 Where is the market headed?
So far, the market has been quite indifferent to the possibility of a strong El Niño. Rice prices continue to remain weak on the back of surplus Thai and Indian rice in the market. In the past 4 months, the Thai 25% broken price has declined by nearly 10% from USD 400/ton in March to USD 365/ton in June (Fig. 1). Close to 100 million tons of global rice stocks, including 9 million tons of Thai stocks, have been supporting the market by acting as a buffer against any irrational market sentiment and speculation. 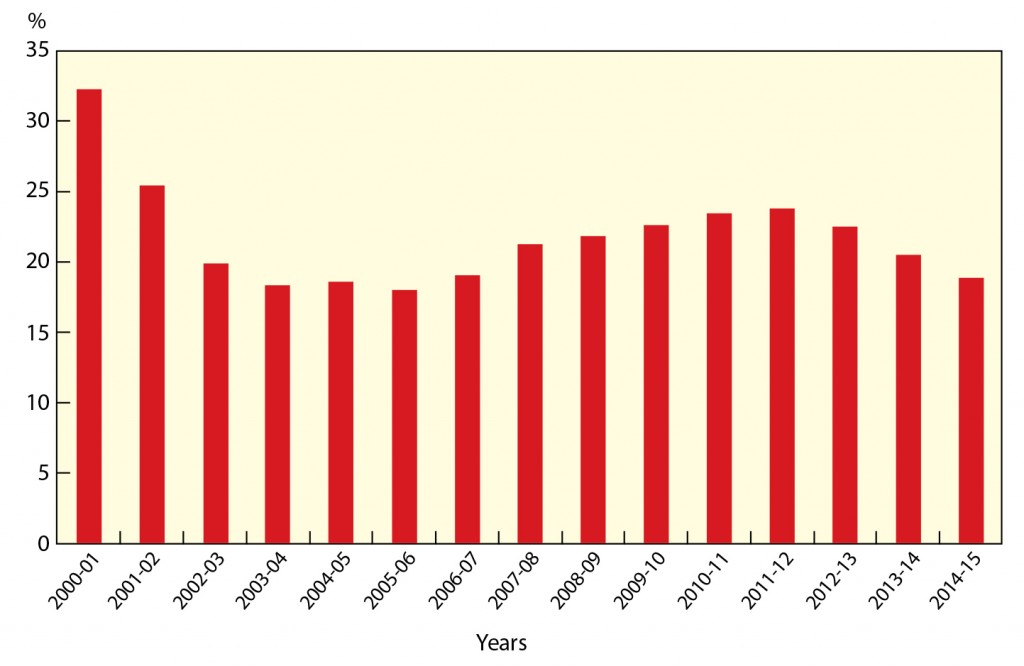 But, the market sentiment can change quickly as we pass through the planting season and crop growth stages of the main crop in many rice-growing countries. Although the current global stock is 25 million tons higher than what it was during the 2007-08 rice price spike, in terms of its share as total use (stock-to-use ratio), the current level of nearly 18.8% is more or less the same as what it was during the 2007-08 rice price spike (Fig. 2). The ratio has steadily declined in the last few years, from 23.7% in 2011-12 to 18.8% now.

India’s monsoon situation in the next couple of months will be key in influencing market sentiment. Its influence on the rice market has never been more than what it is now, with 7 million tons of nonbasmati exports and 3–4 million tons of basmati exports. India’s basmati exports will not come under the radar in case of a drought. However, nonbasmati exports will certainly be the target of policymakers to ensure domestic food security. Indian public-sector rice procurement stocks through the Food Corporation of India (FCI) and state agencies are much higher than the strategic stock requirement, but the current procurement stock is much lower than what it was during the same time last year. Based on the data available on the FCI website, total rice stocks as of 1 June 2015 stood at 22.6 million tons of rice vis-à-vis 28.6 million tons at the same time last year and 34.7 million tons the year before.

Apart from India, the rainfall during November-December, the planting season of Indonesia’s main crop (95% of total annual production), could play a critical role in influencing the market. By that time, the size of the Indian rice crop will be a lot more certain. A poor Indian crop, plus drought in Indonesia by the end of 2015, could rattle the market.

At this point, the market is poised to remain rational and driven by market fundamentals as long as exporting countries remain open for business and refrain from making unilateral decisions to restrict rice trade flows and importing countries refrain from panic buying for domestic stockpiles. The major worry for the market is the countries in the El Niño watch, which include the second-largest exporter, India, and three large importers: Indonesia, Malaysia, and the Philippines. If these countries are affected by drought in the coming season, this could spell trouble for the market.  On the one hand, India will be pulling out of the nonbasmati market to meet the local shortfall and, on the other hand, demand from importing countries will be rising. If this happens, the 9 million tons of Thai rice stocks could come in very handy in keeping the market in check and ensuring that importers not resort to panic buying.

Dr. Mohanty is the head of the Social Sciences Division and program leader (Targeting and policy) at the International Rice Research Institute.